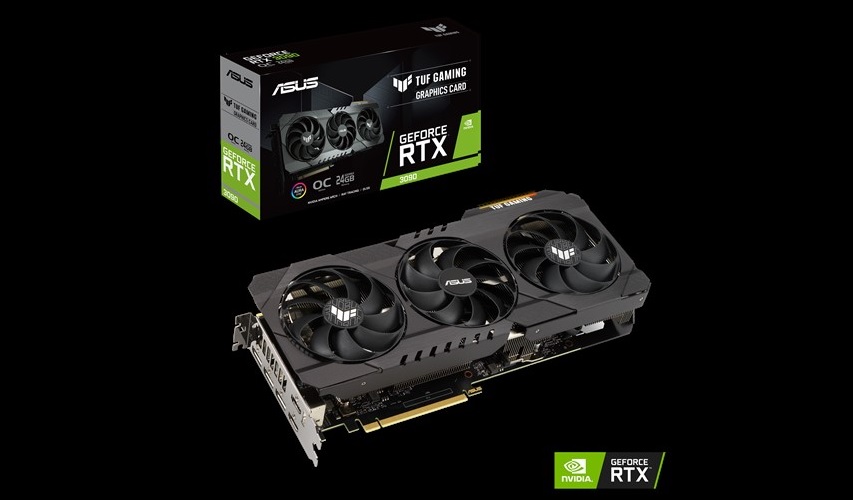 It has been a busy week for us since we put the ASUS TUF RTX 3090 into our case, what with recording videos every day and getting a feel for the card’s performance (you can see our unboxing video here). We ran into problems at first which you will see in some of our Benchmark videos, but we cleaned out our case and removed some obstruction from one of the fans (because the card is longer than the 2080 Ti FE we had in there before). Temperatures under-load went from 85c down to 65c, so quite a difference. Anyhow, we recorded several videos using Nvidia’s new HDR Shadowplay recording in 4K60fps. We also left the MSI afterburner running in most videos, but for smoothness kept Vsync on for those. The benchmark videos Vsync is OFF. Please bear in mind these results are unique to our closed case running at normal room-temperature. We have not done anything to increase maximum performance. Everything is using stock-levels.

As mentioned, the first few benchmarks were with a fan obstruction, so ignore the high temps. We retested and luckily there wasn’t any performance hit. Also please bear in mind, there might be a small performance hit due to Shadowplay recording, but we have found the differences with it on or off aren’t that great. Nvidia made its use less impacting on performance.

Things to note here, our RTX 2080 Ti FE (stock) couldn’t really reach 60 fps with MSAA enabled. Most benchmarks you see of this game for older cards have it switched off. The 3090 really performs well here and the game looks very nice indeed with TAA.

Shadow of the Tomb Raider 4K

Ubisoft engines always seem to be quite CPU dependant, and this one exhibits that with its volumetric fog and explosions. still, and interesting test and a 33%- 50% increase over the RTX 2080 Ti FE (stock) in places.

Here we run the benchmark tool using ultra preset 1440p with an interesting result. Not quite maintaining 144 fps but most likely very possible by reducing things like volumetric cloud quality. Average here was 140 fps.

Reducing the preset to High and the game now easily maintains 144 fps at this resolution. Average at the end was 181 fps.

This was pretty incredible actually, getting over 50 fps with 4k display resolution and 200% render res. It was a slide show with our RTX 2080 Ti but now very playable with the 3090, even in arcade mode, sometimes hitting 60 fps. Whilst the models are quite simple looking, the details stand out at this render res.

We like this new feature having sworn by using it for most of our captures for the channel. Whilst it’s not as good as having a dedicated 4K external capture, it’s not bad and it seems the performance hit isn’t as bad as with the version we used for the RTX 2080 Ti FE (stock) recordings in the past. HDR recording just happens when you hit your keyboard shortcut, so there’s no fiddling about with options. We are well-aware that Action, and OBS have had HDR recording for a while now, but these are separate programs to run. Shadowplay now also features it’s own performance overlay which is handy to keep everything under one roof. We know some folks don’t want all the bloatware on their PC, that’s fine.

These videos are best viewed with a HDR compliant display using the Youtube APP rather than the desktop version.

To conclude, whilst it’s early days with this wonderful card, we like the upgrade from our RTX 2080 Ti. If we ignore the elephant in the room that is the RTX 3080, then the price for the 3090 is in line with how much we paid for the 2080 Ti two years ago. In terms of performance, we love being able to have a great gaming experience with RTX features maxed out and in 4K. Bumping up to 8K is pretty special too, but without the accompanying 8K display, the benefits are somewhat lessened (although for the record, we can see a difference on our 4K display when sitting close). We think for most people wanting a serious upgrade to their PC, then the 3080 is the card to go for, but ASUS has made a great card in the TUF RTX 3090, that’s awfully quiet under-load and just feels right in our rig despite the high-cost. It may not look as snazzy as Nvidia’s Founder’s Edition version, but it does a fine job with its factory overclock. If you have the money, then we highly recommend this card for anyone serious about 4K gaming using max settings. It’s a beast.