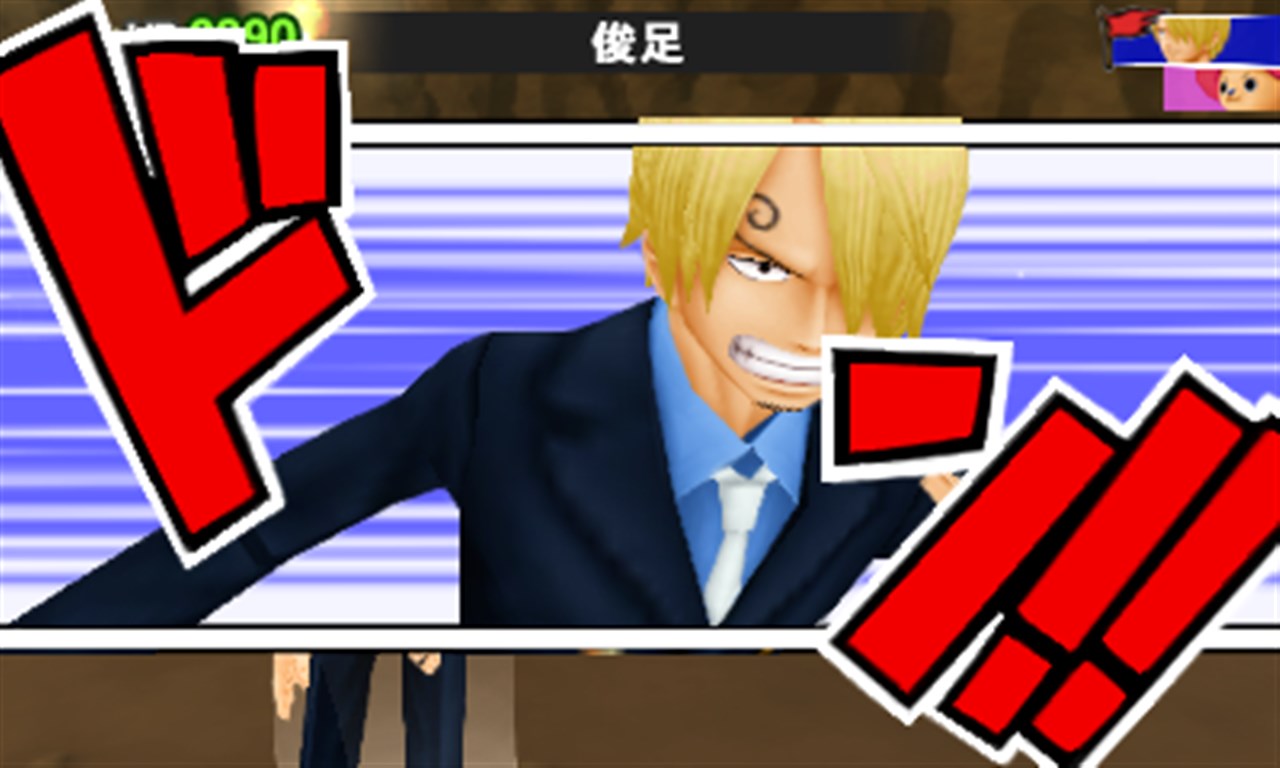 Today we’re taking a look at the PS3 exclusive One Piece Pirate Warriors 2, which has been developed by Omega Force who are more commonly known for their Dynasty Warriors series.  The game follows the same format – as expected – but thrusts players into the One Piece world in an apparent non canon story line.

Before one gets into the fighting, players are presented with several options where they can take on the main story, replay completed missions, enter level specific challenges or head online and play co-op with others. There’s also a gallery to view all the unlockables and information about the characters and game – including a model viewer. Naturally playing through the story and earning coin, is the key to filling out the gallery, but there is a lot to do.

The story is presented in typical anime fashion to suit the subject source, and does a fine job of relaying the plight of the pirates and opposing marines. There’s lots of characters, which if you’re not familiar, doesn’t really matter, and tons of shouting in Japanese which simply adds to the charm of the game.

So, on to the gameplay. Well from the offset, there’s few characters to choose from, with more being unlocked via progression of the story. The game is split into the main story chapters, and then side crew missions which go towards unlocking extra usable characters to fight alongside you.

There’s are some extras to think about before heading into battle, which are explained as you encounter them for the first time. Whilst perhaps a little daunting at first, once, time is taken to understand their impact, it’s pretty easy stuff to fathom – especially if you’re more interested in fighting than messing around with menus. The extras through the collection of coins in the field provide upgrades to basic stats like attack and defense, are a useful layer to mess around with to get better result through combinations of coins.  There are also skill books which can be acquired which boost stats or offer extra abilities which can prove very useful in the field.

The game’s combat revolves around spamming the soft and hard attack buttons, or carefully tapping out limited combos against masses of enemies who tend to stand around looking tough but doing very little. With simple moves, players can obliterate enemies with ease, and so to counter this tougher enemies with larger health bars are thrown into the mix. These guys require a bit more skill to take down are often tied to capturing bases, or affecting overall morale of opposing forces. Paying attention to the chatter and mini map is key to success, as being in the right place means you’ll counter any mission failure parameters which require a restart of the entire mission. There are quite a varied bunch of enemies to wade through in terms of design, but gameplay wise their effect is rather limited and the overall balance of gameplay is quite repetitive.

To keep with the story, each level has several sub boss and main boss characters to defeat, with many tending to respawn during battles more than once. However, with careful planning and an understanding of searching for food if you’re taking a beating, most characters can make mincemeat of the bosses using flamboyant special attacks and well placed evasive moves.

Sadly, the lock on system isn’t very good, and when surrounded by many and trying to hit a singular enemy, the character seems to not stay locked on very well which is a bit sloppy. There’s also numerous times when the camera angle doesn’t sit right when close to solid walls, making for some awkward moments to wrestle with. Whilst perhaps only minor complaints, given Omega Force’s long running history of making these roaming beat em ups they would have nailed these issues by now.

Graphically, One Piece looks great with its colourful anime inspired look and fast movement. There’s some neat animations for the characters, and plenty of variety which is good, although there could have been a few more varied stages to fight on. Sadly, the game does suffer from some dips in the frame rate at times when there are lots of enemies on screen, which although impacting on the gameplay to some degree doesn’t detract too much.

Audio is lively and roaring with a thumping soundtrack to keep pace with the gameplay. The voice acting is all in Japanese with English subtitles to guide you through. It’s hard to fault the performances, which are as cheesy as you’d expect, but with such a large cast of characters, is expected. The music might not be to everyone’s taste with its screaming guitars and fast paced beats,  but is certainly fitting to the subject material.

Players will spend quite a few hours working through the game’s main story, and then completing all the crew missions, challenges – then doing it all over again online or via local co-op. There’s quite a lot of bang for your buck here if you’ve got the patience, to play the same styled missions over and over.  The online play is rather limited in that players cannot explore further than what is unlocked offline, but is nice to be able to level up and collect coins with another player.

One Piece Pirate Warriors 2 is a solid entry for the series and could spawn more games if proving to be popular. For fans, this is a no brainer and will offer hours of fun and games. For those looking in from the outside, it’s a tough call, as the game’s story and characters are very accessible, with no prior knowledge being required to make sense of it all. Yet, at the same time, the repetitive free roaming fighting might not be to everyone’s tastes; so if you’re not a fan of the Dynasty Warriors games, then this isn’t likely to win you over either.

That said, despite a few niggles here and there with the frame rate and some gameplay annoyances, One Piece Pirate Warriors 2 is fun and likable game that is easy to play, and offers a great way to let off some steam.