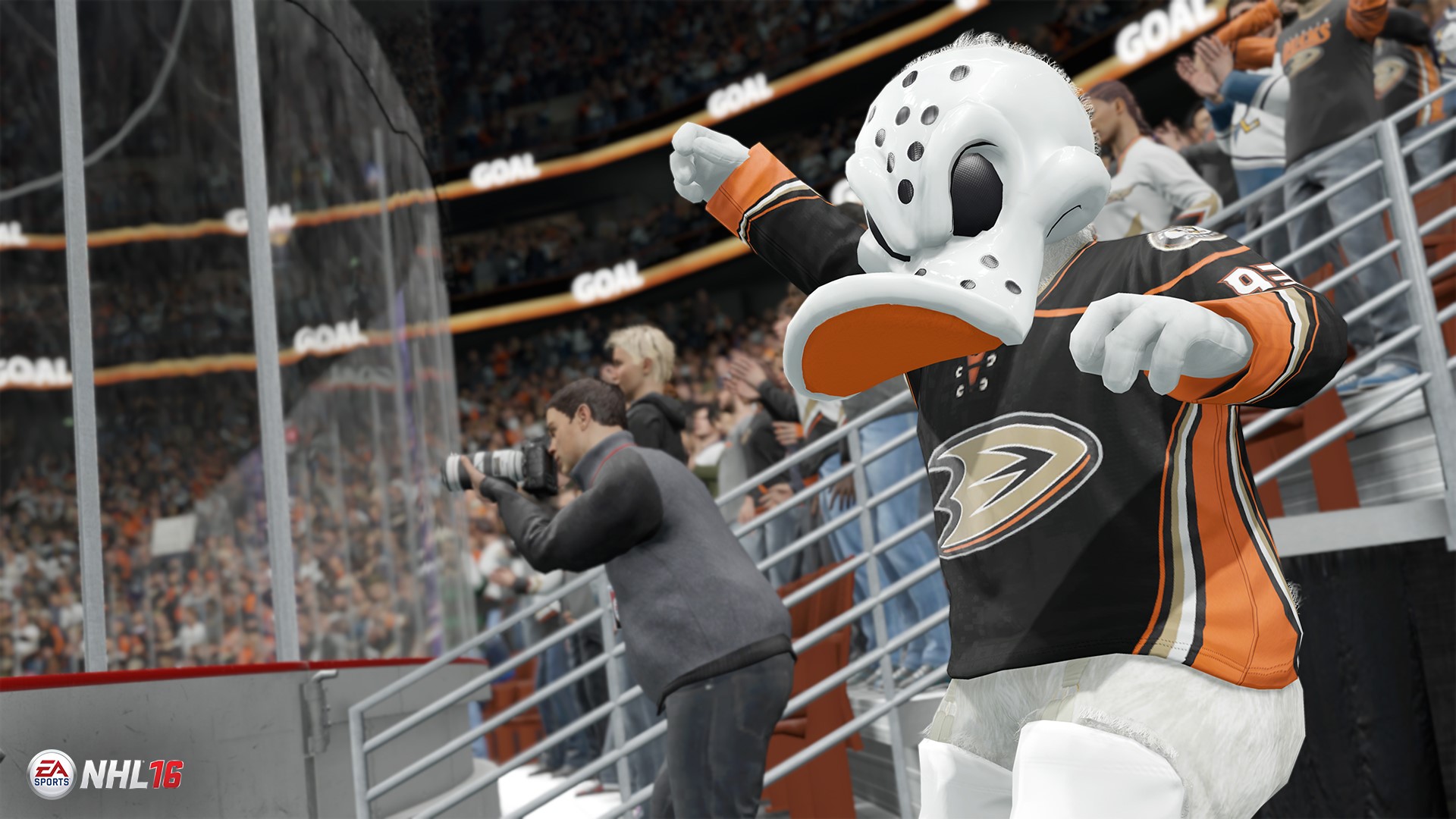 As a teenager in the 90’s one of the games that my brother and I seemed to always play was NHL for the Sega Genesis, we’d have intense games against each other often times erupting into full on fist fights. Coming back to the NHL series since last playing back in the early 2000’s was a feeling of excitement and a trip back to memory lane since so many good times had been spent on this season in its early days. 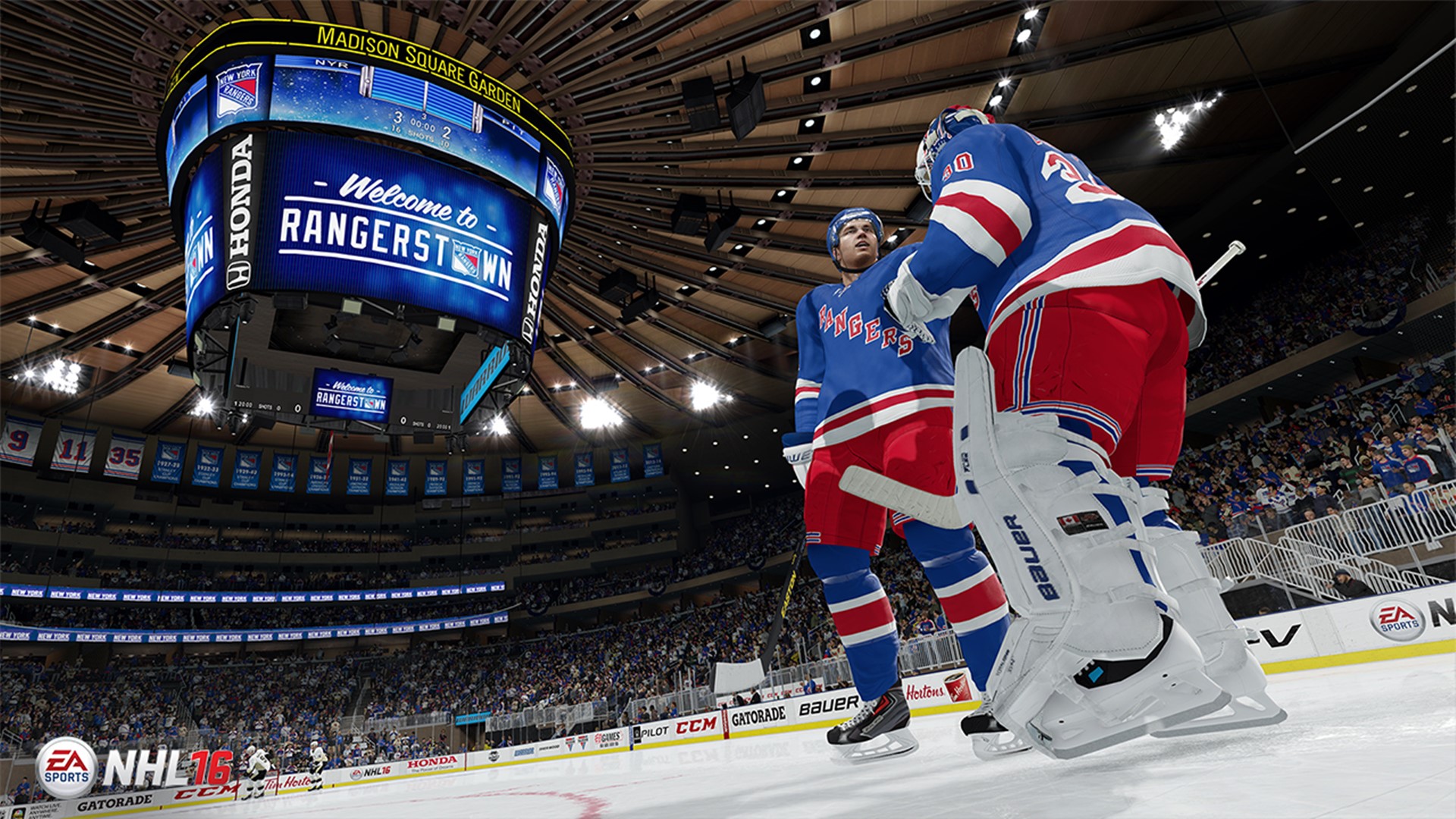 The first thing I noticed was the graphics, full on 1080p hockey in all its beauty was easy for the eyes to take in. They skipped no little detail all the way down to the cameras in the goal and the Gatorade bottles on top of the net. The pre-game interviews looked so good I’m still debating on whether they are real people or just pixilated holograms of the real announcers. Player models look spot on and you can even grow a “Playoff Beard” in the post season which adds to the realism and gives you the authentic feel of the playoffs. 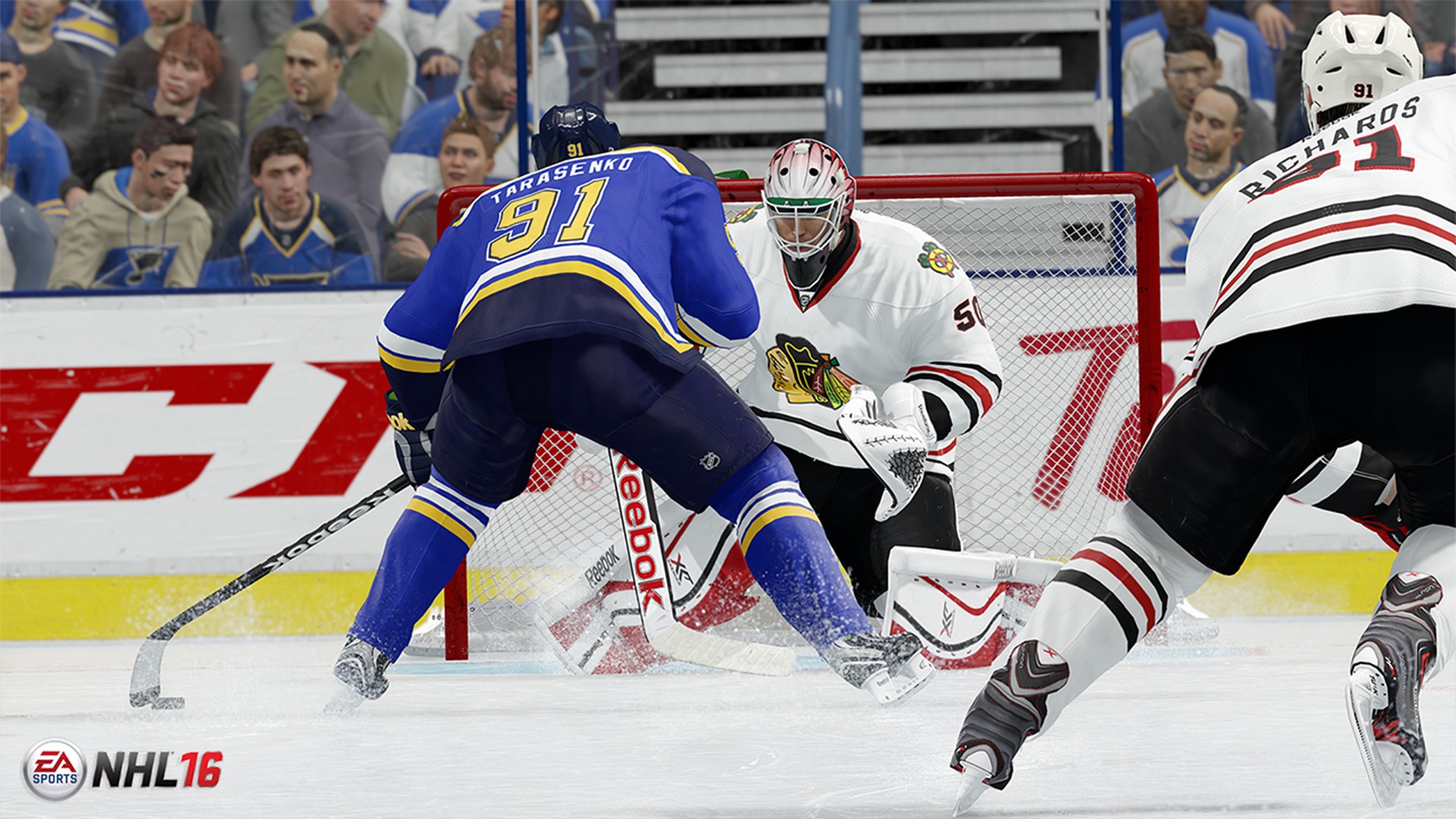 The amount of different game modes they have jam packed into this NHL is off the charts with GM mode where you not only manage your team but deal with draft day and manage the AHL affiliate team as well as keeping the morale of your players in good spirits. Balancing every angle of the front office is every bit as challenging as controlling the game on the ice. Player mode feels like a true to life grind where you start in the minors and work your way up the NHL roster. It is the dream of every undrafted hockey player to start at the bottom, pay your dues while honing your skill, and make it to the NHL. Season mode is a pretty cut and dry experience where you pick a team and play through a tough NHL season in hopes of winning the coveted Stanley Cup. It is the basic mode that any sports game encompasses allowing the player to choose their favorite team and bring glory when in real life it may be the exact opposite (coughs….Columbus Blue Jackets)
There is also a practice mode which is pretty self explanatory and NHL moments where you play out certain historical events that occurred during the 2014-15 season. These are pretty sweet flashbacks to see if you can accomplish what the players did in those games. And finally there is the online play giving you two modes to choose from, the first is the regular online versus that pits your skill against random opponents (or friends). The second is a Team Play version where you can get five other friends to play on your team. With so many different types of game modes there is tons of replayability in this game giving you a different way to experience it time and time again. 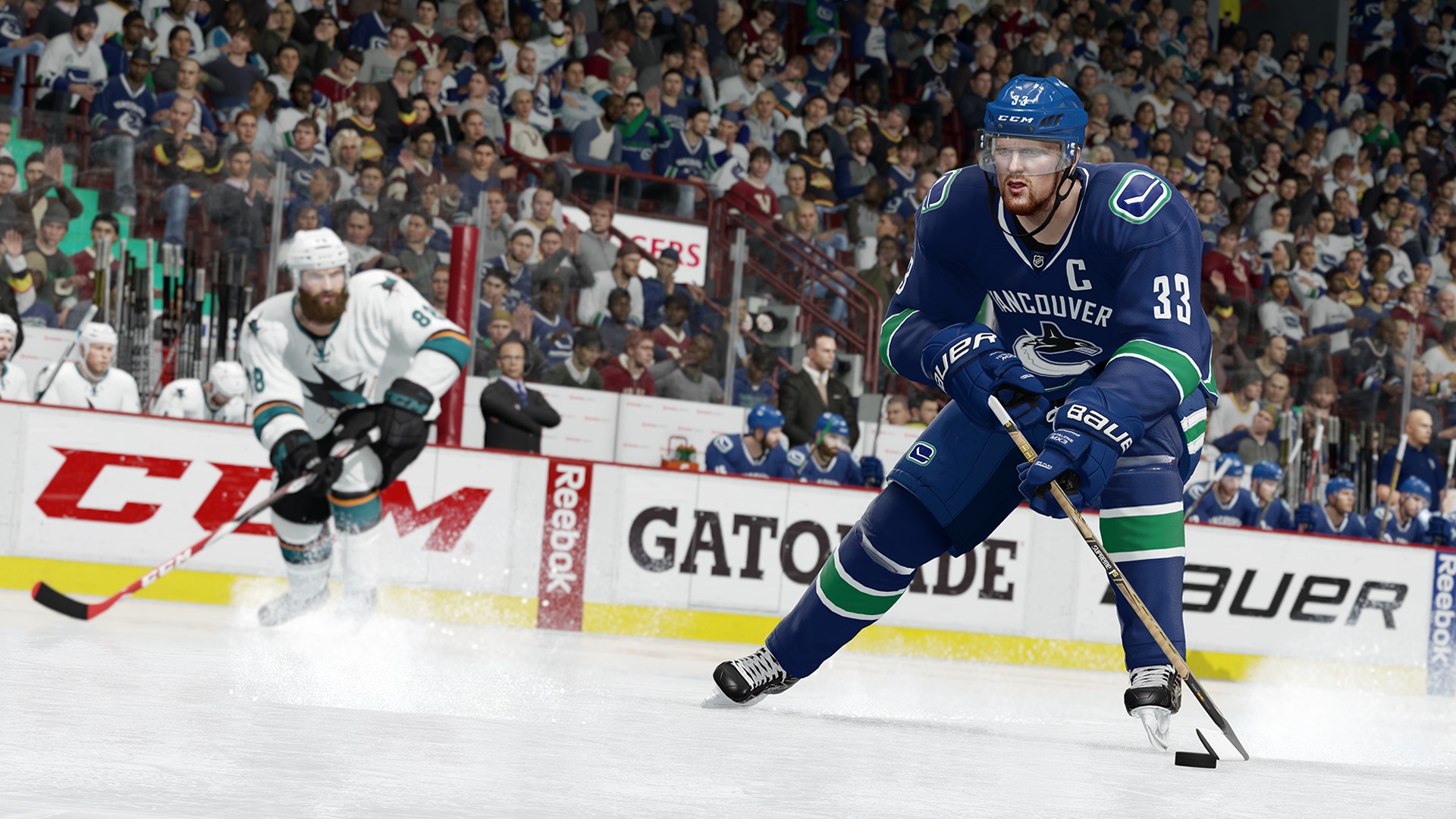 The controls allow the game to be configured to any level of players desired control method. You can choose to use the new control scheme where shooting is done with the right stick or revert back to the old school style (which I prefer) of using just the buttons for passing, shooting, and checking. I played with both versions of these controls and they work flawlessly even on the face-offs where quickly flicking the right stick back at the right time can win you a faceoff if hit at the right time or lost if not quick on the draw. They have also added in an On Ice Visual Trainer which gives you feedback during game play and helpful tutorial lines that give you the movement of the puck. When you attempt a pass there will be a line to the person you are passing to and if that pass can’t be made the line will be broken, the same happens on shots so you can see where your shots are going. This is very helpful to new people starting out, but after a while I can see this getting annoying. Thankfully it can be turned off in the menu once you master the controls. 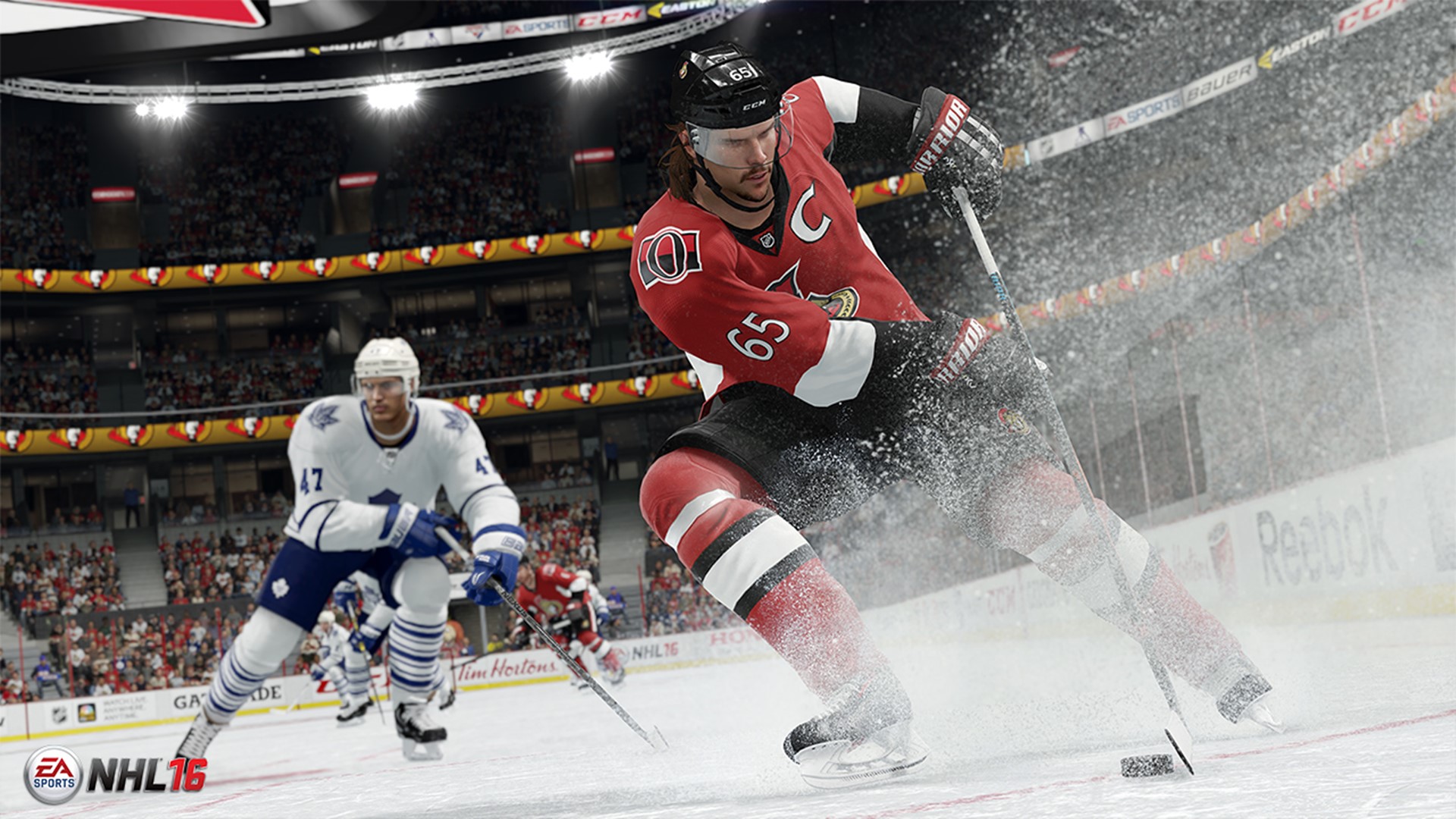 Overall NHL 16’ is a great bargain because of the sheer amount of replayability this game is packed with from all the different game modes and online play to the multiple control configurations that make the game flow smoothly. Factor in amazing presentation of the NHL license with the beautiful graphics and you have a perfect combination for any puck head. If you’re a hockey fan I strongly recommend picking this up just in time for the 2015/16 season and place yourself on the virtual ice.