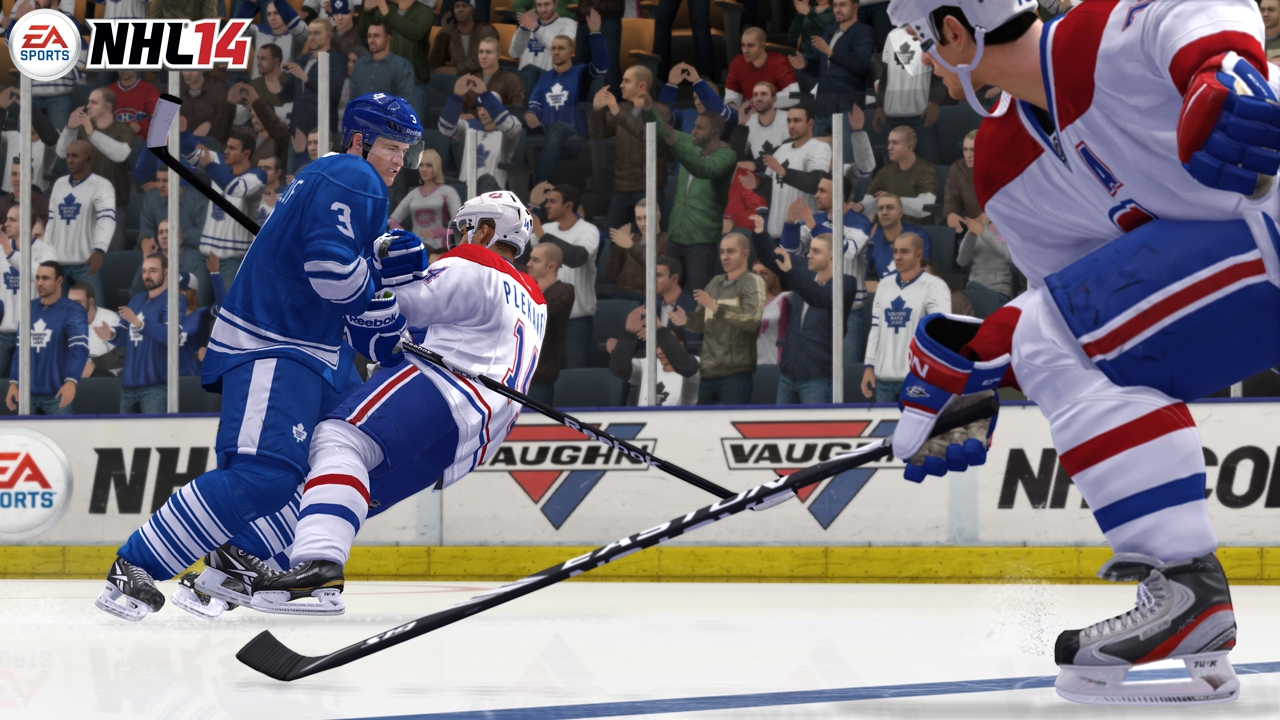 EA’s latest game in the long running series reaches game number 23 in NHL 14 which is crammed full of modes and features. For non hockey fans and newcomers, how welcoming is the game and is it worthy of a purchase. Take a look at our NHL 14 video review.

Today we’re taking a look at EA’s 23rd game in its NHL series with the arrival of NHL 14 which has been developed by EA Canada and is available now on PS3 and Xbox 360.

To begin, players are thrust into the full on visual experience that is the main menu, which is simply awash with effects and player choices. At a first glance it’s a little overwhelming what with menus and sub menus galore, all offering enticements to come and check them out. Yet, given some time to fully appreciate the number of choices on offer, it’s a pretty momentous task to get them featured within the slick menu interface used.

Players can simply dive into a game relatively quickly using a play now option which allows for least understanding of the history of the NHL. Here you can chose  a standard game where you pick a team and opponent, select the level of simulation over arcade, and then hit the ice. For more seasoned fans, there’s a ton of extra modes to mess around with that range from historical matches  in NHL Moments Live, to the GM Mode, Winter Classic Mode, and going back in time to play NHL 94 as part of  its anniversary. To round things off there’s the option of playing as a single athlete in the Be A Pro mode which includes a bit of off ice interaction as well such as interviews to raise stats. And finally, an all encompassing Hockey Ultimate Team which offers all sorts of challenges for on and offline players – including a bit of trading thrown in for good measure.

So aside from a plethora of modes and options, the basic game plays very smoothly, and more importantly, is simplistic enough for non seasoned NHL gamers to pick up and play in an instant. There are more intricate movements to master, but what is good, is how accessible the starting block is for newcomers. Within moments of picking up the pad and using the intuitive stick controls, players will be sending the puck to the back of the net in no time. There are elements of the game with the AI being a little slow to react at time, but in general, controls and fluid movement make for a speedy and engaging basic game.

Jumping into the Be a Pro mode, offers a bit more insight into the game, as players check out simulated moments or sit on the bench watching the action unfold as it happens, it’s certainly a mode full of depth and complexities of being an NHL player a rewarding point of entry for those looking for a deeper experience that can be played for longer periods.

In terms of looks NHL 14 captures the essence of the hockey game and using techniques from other sports games in EA’s library has paid off – the FIFA Player Impact Engine works wonders here for example. The game runs silky smooth using the default view which offers just the right elevation and angle to keep on top of the action. The environmental details are good, but the main focus is on the players who look fantastic, even after being bloodied in a fight on the ice. The presentation is perfectly placed, and makes playing really feel like  a televised event. With so many years experience in recreating big games, this is somewhat expected, and EA should be masters of this art, which they clearly are.

Audio is also very good, although the EA Trax will no doubt be an acquired taste for some players. The commentary is solid, and the general ambiance of the matches is captured very well making for quite the authentic sounding experience.

NHL 14 has a wealth of options and a lot of content to mess around with suiting a wide variety of player types. There’s something for everyone whether that be offline or online play, making the package well rounded and enough to last until next year’s release at least.

Without being huge stalwarts of NHL, this particular game is very much the epitome of 22 other games, making it a well polished, easily accessible, but challenging offering that’s well suited to fans. Whilst there are training wheels for newcomers, it’s fan service that is catered to the most and if you’re an NHL fan then this is most likely already being played.