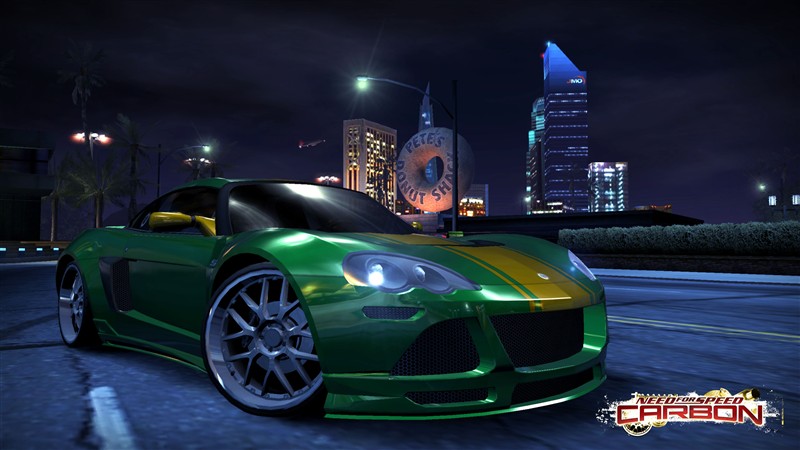 It has been less than one year since the release of Need For Speed Most Wanted and yet we have another Need for Speed game already upon us which picks up from where Most Wanted left off, with your character escaping the cops in that nice custom silver and blue trimmed BMW. Cue Need For Speed Carbon the next game set in another fictitious US city and one that is set purely during night time. The onus in Carbon is more on the wider underground racing/tuner scene that comes alive after hours. As the game suggests from the opening scenes, everything has changed since Most Wanted and now there are various gangs with their respective leaders and minions controlling parts of the city as opposed to the one gang led by Razor from the first game (first game on Xbox 360 that is). So is Carbon more of the same or radically different to its predecessor?

From the offset, players are thrust into the heat of action whilst the game steadily introduces the player to the new features in the game. Yes, there is a free-roaming environment to wreak havoc in but also a shift towards having your own gang this time round. This is the first major difference as gang members (of which you unlock more as you progress through the story) can now be hired to race alongside you. There are three types of gang members which are Blockers, Drafters and scouts. Blockers are quite handy during races as with a press of the Y button will activate and block any opponents trying to over take you. Drafters are slightly different in that they will allow you to get behind them for a slipstream enabling you to get a boost of speed. Scouts which are perhaps my favourite race ahead of you leaving a trail for you to follow, their main purpose is to highlight any shortcuts along the routes you will be racing on. Each gang member has their own set of skills they bring into the fore which include special bonuses such as discounts on new cars to less interest from the city’s cops. They are a motley crew of individuals but more importantly prove to be invaluable as it seems the AI tends to use the Blockers themselves during races.

The races themselves are the same as before with sprint, checkpoint, circuit and speed-trap events available. There are some new races added as well which include the infamous downhill races in canyons which are set in narrow winding roads with hazardous cliffs where players can skid off to their doom if taking a corner too fast. There is also the inclusion of drift challenges which are very similar to those seen in Project Gotham Racing games. The city is divided into gang controlled turf this time and with a look at the GPS map, players can choose various races in these areas to attempt a take over. If players win races (there are normally three per sub area) then their gang take control of that part of the city whilst raising their reputation. Once a certain number of areas are controlled, players are then able to take on the gang bosses (there are four in total). Once a gang boss has been defeated then players fully take control of their territory; although on occasion rival gangs will try and take back areas you have previously taken control of.

The story aspect is presented very well and adds some meaning to simply going out onto the roads and burning rubber. The characters each have their own distinctive personality and during races can be heard giving you advice and progress reports as you race. The bosses are equally full of personality and during races you will often see a picture in picture display of their mug shot either laughing at you if too many mistakes are made or looking agitated if they are losing to you. It’s certainly rewarding to beat down bosses that act full of it during the game’s cut-scenes.

Onto the actual cars, there are now three main vehicle types of which you are forced to choose one from the offset. These are Exotic, Tuner and Muscle and come in tiers ranging from lowest (1) to highest (3) with the higher tier cars performing better but obviously costing more. Players are able to head to the garage and add performance enhancing upgrades to things like engines, suspension, tyres and such like. Players are also able to add their own personal touch to their vehicles in the form of body kits, vinyl’s and with a new auto sculpting feature means that there is a lot of options available to make your cars more distinctive. That said, there are a number of items that need to be unlocked and so players will have to spend time completing races to get the full benefits here.

As before and perhaps slightly different there is a free roaming mode to mess around with where if you want to get into the excellent cop chases then this is the place to do it; although as your reputation increases so does your wanted level which means cops can and will interfere with you during crucial races which can prove to be a pain. In free roam mode you are also able to challenge other rival racers in a similar fashion to the recent test Drive Unlimited although this is versus AI opponents as opposed to human. The cop chases themselves seem to be exactly the same as before, with cops using several stages of aggressiveness to combat you. It certainly makes a welcome break from the street racing to tear up the town with several cop cars in tow and is perhaps one of the more invigorating modes of the series.

Carbon features some impressive looking car models alongside some equally impressive character models which show up from time to time; in fact the character models really do convey emotion very well, maybe the best I’ve seen to date in any video game. The in game cinematic moments use real actors which have been glossed over to make them look computer generated and this works well yet again. The city itself is shrouded in darkness which means lots of pretty lights to look at as you tear down city streets. Carbon most certainly is presented very well in general and with no issues such as frame rate dips and the dreaded screen tearing that plagued Most Wanted means that players can focus on racing without cause for concern over other unwanted issues.

What more could you ask for in a racing game? You have the roar of car engines and the screeching of tyres accompanied by a blistering soundtrack that gets you in the mood for racing. As per usual if you aren’t so keen on the in game music then the choice is yours to add your own beats instead. The voice acting is reasonable and to be honest the banter during races does add that extra layer of personality but at the same time does get annoying as repeated phrases will be heard most of the time.

The career mode isn’t the longest and will take competent racers little time to beat; that said there are a number of reward cards to aim for of which these will take a lot longer to master. Things like bronze, silver and gold challenges await those who have bested the career as well as the option to retry the career mode using one of the other car types available. Of course for the connected and those with friends then there are split-screen multiplayer and online components to mess around with as well. The online modes 0offer the same race types as the career mode with the inclusion of a cops and racers mode thrown in for good measure. I’m not sure how well the online measures up after extended play as the races I had were full of warping cars due to lag issues which is an issue of connectivity rather than the game itself. There is certainly a lot to do in Carbon and if you are after achievements then you could be playing the game for quite some time before you get the full 1000 points.

Need for Speed Carbon is a welcome addition to any racing fans collection although with the added inclusion of new events and the whole gang related features doesn’t make Carbon that different from its predecessor. Everything feels very familiar and if you were fan of Most Wanted then obviously you will be right at home here from the offset.

Car handling, physics and the overall arcade flavour of Most Wanted returns here and I must say hasn’t been improved or changed one bit as far as I can tell which may not necessarily be a bad thing as Most Wanted was very solid indeed. One thing that I found interesting with the gang members was that more often than not they would actually win races for you in the career mode, which luckily you aren’t penalised for. I found this unusual and somewhat perplexing as I would have liked to be able to win the races myself rather than have some AI take the glory and satisfaction away from me. The story element whilst interesting did feel very pantomime to me as a lot of hard talking was uttered during the cinematic moments and I often felt that these hard talking people would probably be better off bringing out shotguns and Uzis rather than taking to the streets to settle differences. Either way Need For Speed Carbon is rather fun despite not adding anything new to the series. One high point in the career mode are the excellent races which feature a full roster of 19 opponents to race against, whilst these races are few and far between (four in total in the career mode) they certainly add much flavour being able to see and pass all those cars in one race. If you like fast cars, customisation and arcade gameplay then Need for Speed Carbon is certainly a game well worthy of your time and money.