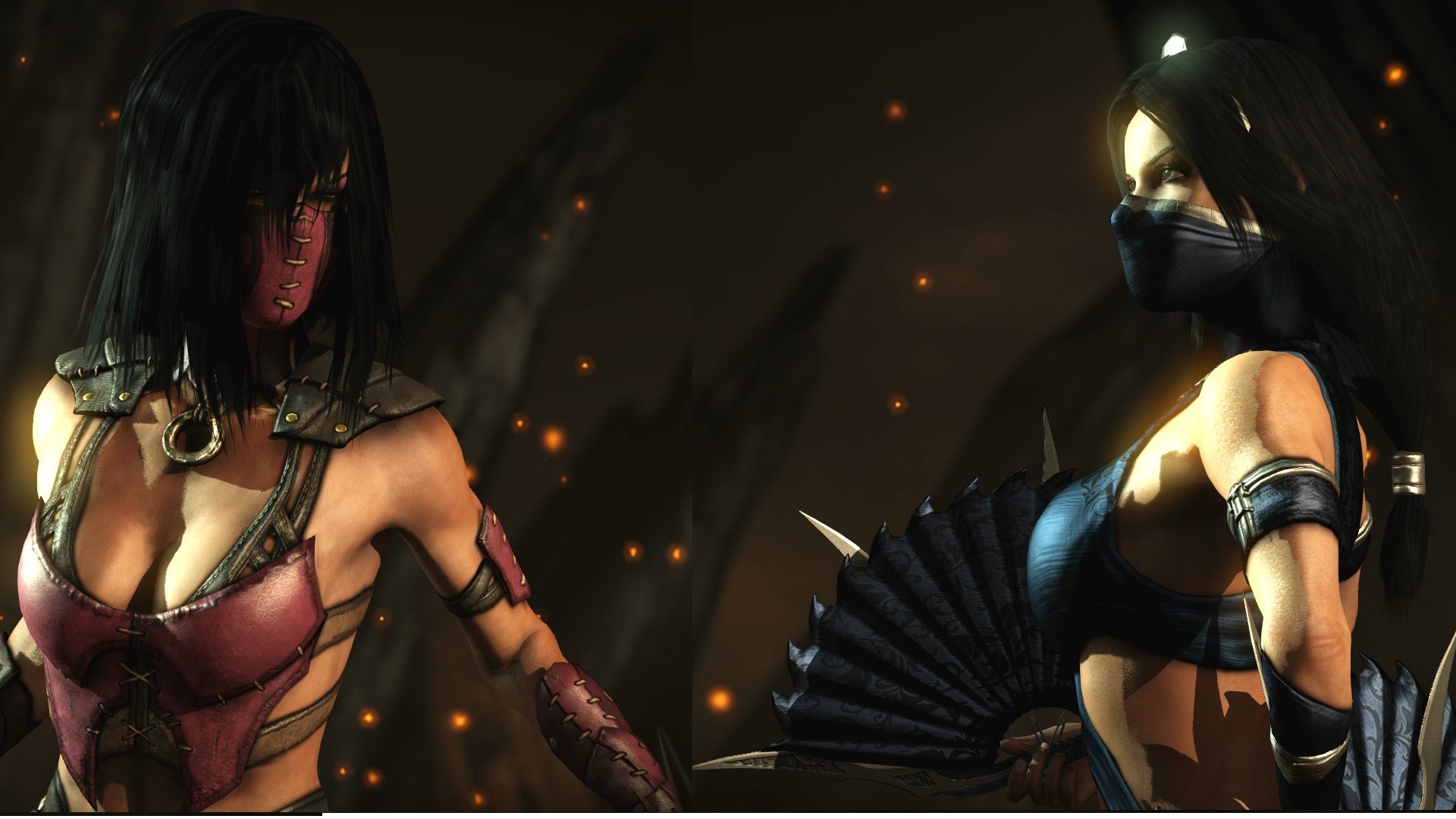 Fighting games always instil a sense of nostalgia in me from the era of the arcades. When Mortal Kombat burst on to the scene in 1992 it changed the face of the fighting genre and forever set the bar for the next game to become bigger, badder, and bloodier. Over the last 2 decades fans of the Mortal Kombat have watched the series make strides both backward and forward while pushing the envelope and creating a multifaceted universe. The latest instalment, Mortal Kombat X, seeks to take all of the best parts of previous games and infuse them with brutal force and copious amounts of blood. The question is, does it really work?

When you first load up Mortal Kombat X you’re prompted to one of the game’s new features: Faction Wars. You’ll choose one of five different factions that are based around the major players in the Mortal Kombat universe. Once you choose your side, you’ll unlock special kills called “Faction Kills” and everything you do in the game to earn XP will contribute to faction XP that helps your side stride closer to the weekly goal of winning the war. There are some activities like daily challenges, faction towers, and battling a heavily armored super invasion boss that add to your cumulative faction score.

Jumping straight into gameplay you’ll experience the classic Mortal Kombat mechanics of blocking and combos, as well as the visceral x-ray moves and over the top fatalities that will have you both cringing and laughing. Each of the 24 characters have unique move lists, specials, combos, and fatalities to master that provides a solid experience for both rookie gamers and pros which is something many in the genre can’t boast about. Mortal Kombat X is a game that makes itself accessible to the player who likes to jump on and play a few rounds as well as offering 3 different variations of each character to master for those who want to dive into the massive amount time it will take to master them all. The variations of the fighters share the same basic move lists, but adds a distinctive flare that contrasts the others. For example the new Wild West inspired Erron Black utilizes a long rifle for his marksman variation, unique revolver trick shots with gunslinger, and the outlaw adds attacks from a Tarkatan arm blade. In addition to the different moves with the variations there are a few cosmetic changes you’ll notice. Control of your fighter offers crisp and precise movement that aids in the set up of combos that can turn the tide of a match. 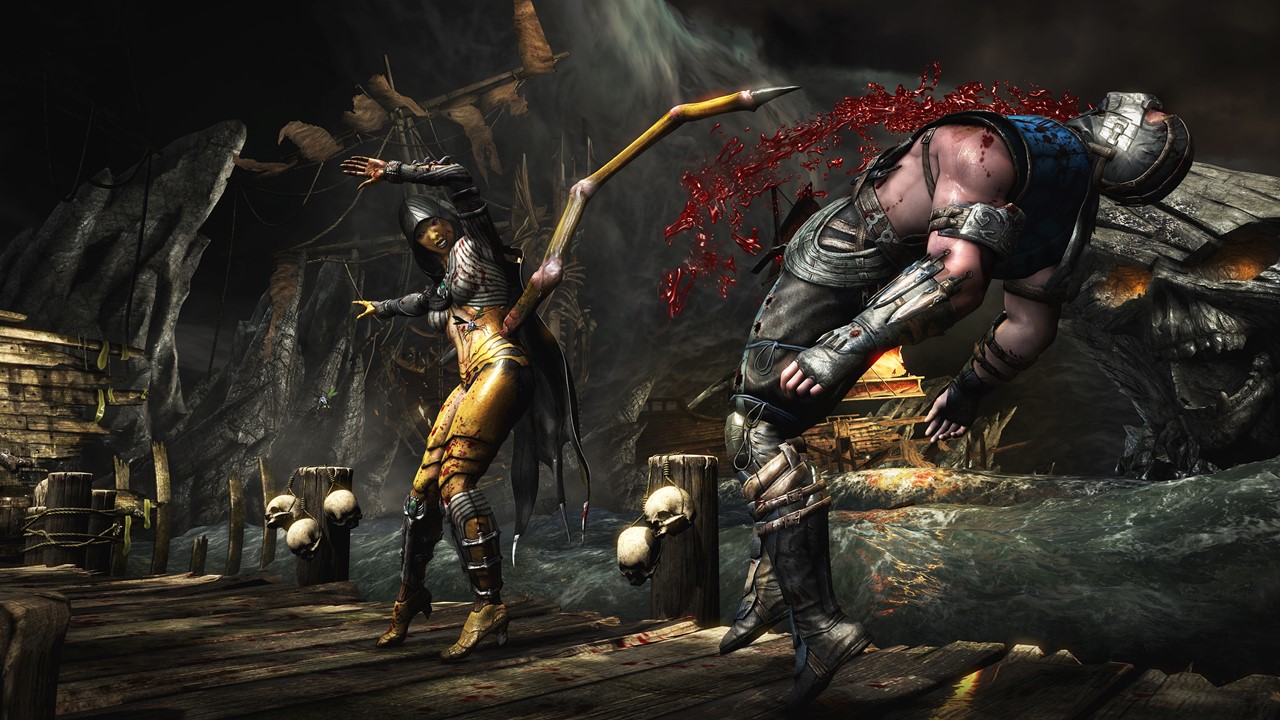 Mortal Kombat X offers a plethora of content without ever having to venture into the sometimes cruel and unforgiving realm of online fights. Story mode is back and imparts a rare side of the fighting genre that thrusts the player into an immersive universe woven with a great narrative. Sure you can argue that the length of the campaign is short and only allows you to use a handful of characters, but the 4 hours that you put into the story feels like you are part of a CGI movie where you get to hand out the beat downs. While the story focuses on the Cage family there are splatterings of other characters and worlds that allow players out of the Mortal Kombat story loop to grasp the dynamics between individuals and their reasons behind wanting to gruesomely destroy each other. You’ll also be introduced to a new generation of fighters that are somehow related to some of the more memorable characters in the MK Universe like Jax’s daughter Jacqui and Kung Lao’s cousin Kung Jin. I really loved this dynamic and symbolism of passing the torch onto a new generation that could possibly lead to spin-offs and an expanded universe. 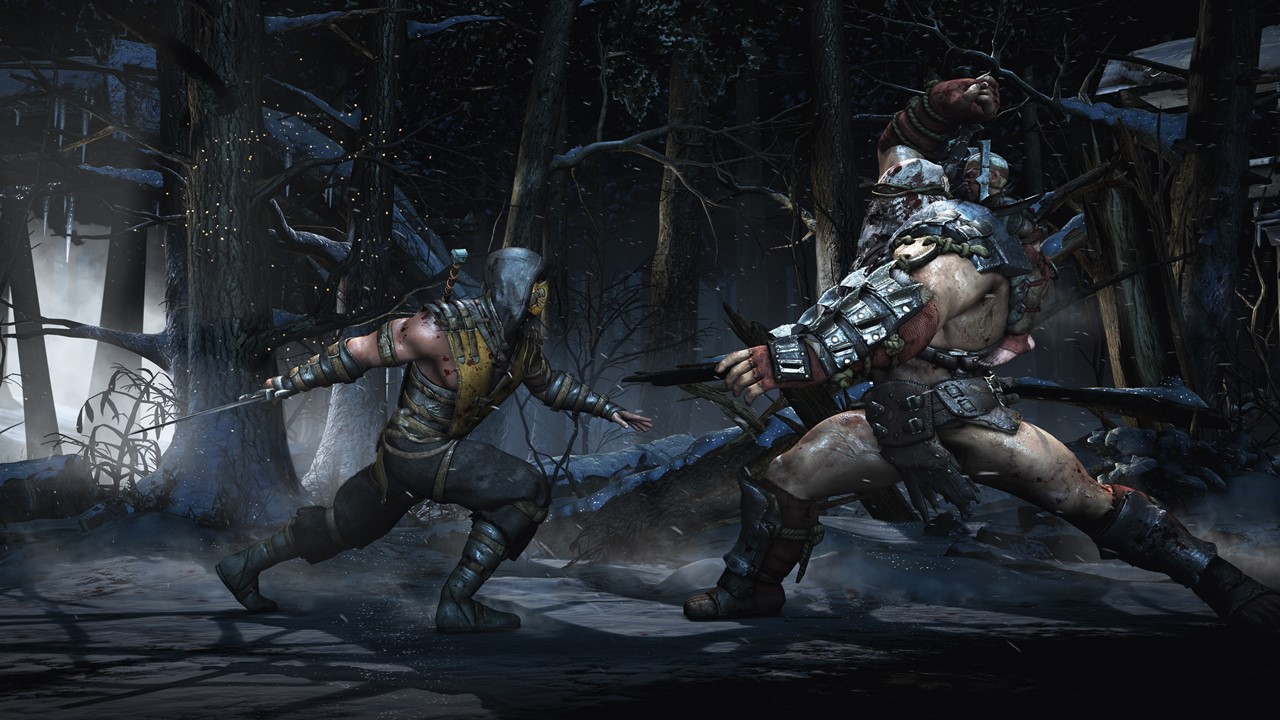 What would MK be without towers? So of course you have the option to play the Klassic Tower (play through each character and see their special ending) as well as some new towers that add in a multitude of variants like acid rain, falling heads, earthquakes, increased/decreased speed, etc. These are called Living Towers and change hourly, daily and for special events that guarantee you’ll have something fresh and new to play well after you finish the campaign or grow weary playing versus mode. Krypt also makes a return permitting players to venture into a type of mini-game that is filled with puzzles and jump scare quick time events while unlocking tombstones, spider sacks, and chests for content.

If you love the thrill of random combat then the online features have a lot to sink your teeth into with modes like King of the Hill, Klassic, and Survivor as you strive to stay on top and exude your dominance. You’ll get hit with the occasional lag, but overall the online runs smooth and searching for a match is easy. However if you think you’ll be pitted against a foe of equal skill it is more of a roll of the dice where sometimes you’ll dish out the punishment and other times you’ll be on the receiving end of a brutal beat down. No matter what you like to play there is heaps of content in Mortal Kombat X to keep you busy for a long time without ever having to splurge on extra content. 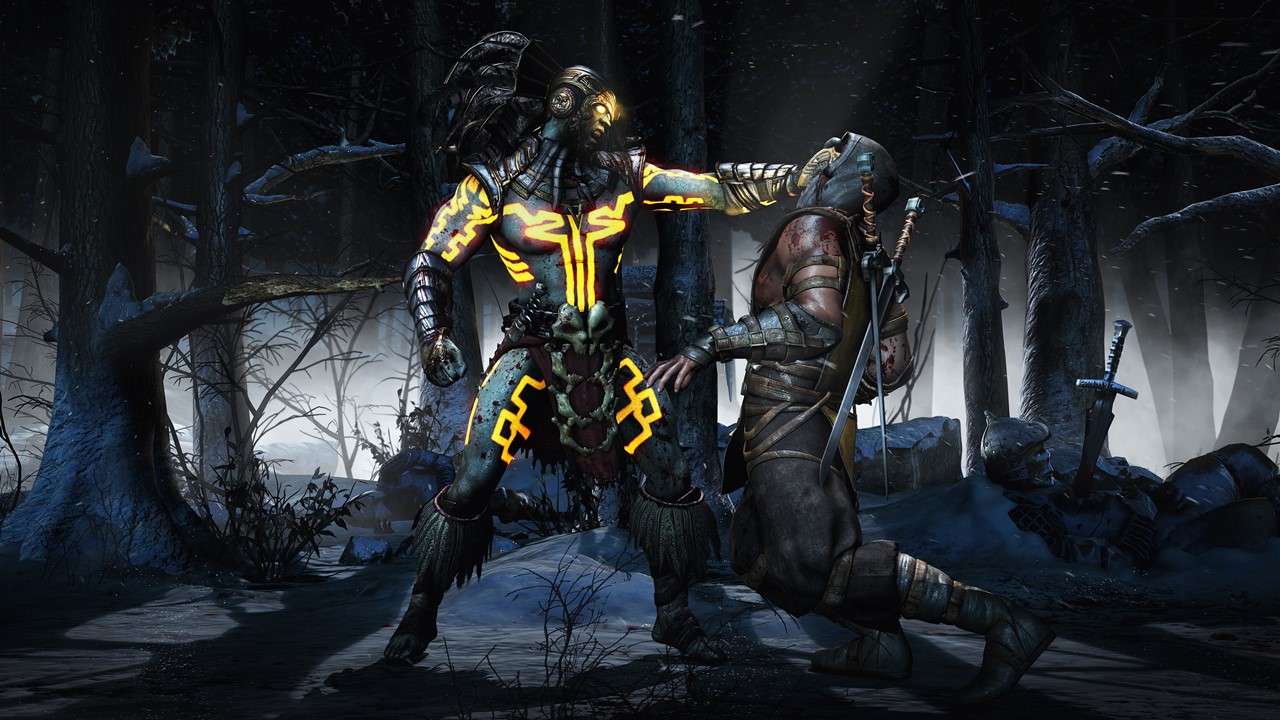 Visuals are stunning and make Mortal Kombat one of the most stylish fighters to grace consoles in a long time. Not only are the environments interactive, but beautifully rendered with the lighting and particle effects. Character models also benefit from these, but the animations really bring the emotion of each fighter to life. If gore is your thing then you’ll love the visual extravaganza provided by each x-ray move and fatality and when you combine them with the superb sound effects of bones fracturing and vital organs squishing you have a cringe worthy winning recipe. Sound effects are fantastic as each slam, jump kick, and slice make you feel like they are real, but the real gem of Mortal Kombat X is the voice acting. Every character’s voice really fills them with a sense of raw emotion that doesn’t feel like some cheesy B-movie, but a top notch production you’d expect from a blockbuster movie. If only the background and cinematic music was done as well as the voice over’s and sound effects you’d have the perfect immersive experience. 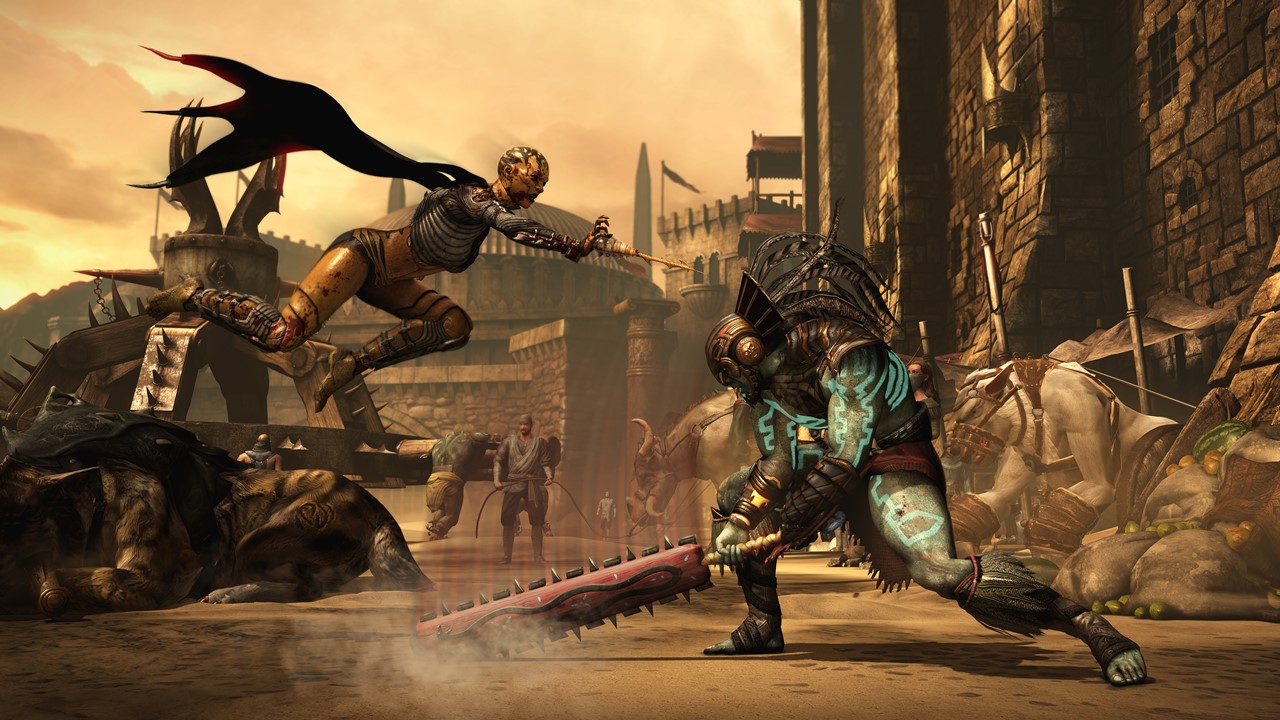 The days of lining up quarters along the arcade cabinet are long gone and a new age of online battles reigns supreme, but if you are even remotely interested in the fighting genre or Mortal Kombat series you can’t go wrong with Mortal Kombat X. NetherRealm dumped a massive amount of content into the game that will keep even the most seasoned fighter busy for the foreseeable future. Visuals and audio are first-rate providing that extra layer to make the game one of the most polished and well-rounded fighters to grace a console in years. So what are you waiting for?! There is plenty of blood to be spilled and plenty of fun to be had while spilling it.