If you’ve been playing Konami’s Metal Gear Solid V The Phantom Pain for the last four weeks since it released on September 1st 2015 then you’ll be well aware of the messages you have to read or skip as you log in to the game. Well yesterday’s message makes special note of the one month anniversary and indicates that some special FOB related events will be happening and are detailed as Infiltration and Support Promotion events. However, the message also suggests more “thrilling FOB online gameplay” following a patch which releases on October 6th alongside the release of Metal Gear Online Multiplayer mode. Perhaps there will be a relation between the FOB and MGO modes?

During the event there will be “fantastic rewards” for those who can reach the core of rival FOBs 5 times or if you have 10 or more supporters. The event will run from September 30th – October 6th but the rewards won’t be available until October 13th. You can see a breakdown of the rewards on subsequent pages, but there’s no mention of what the patch will introduce on October 6th.

Players must reach a total of 10 or more supporters. These are the rewards if you are able to comply: 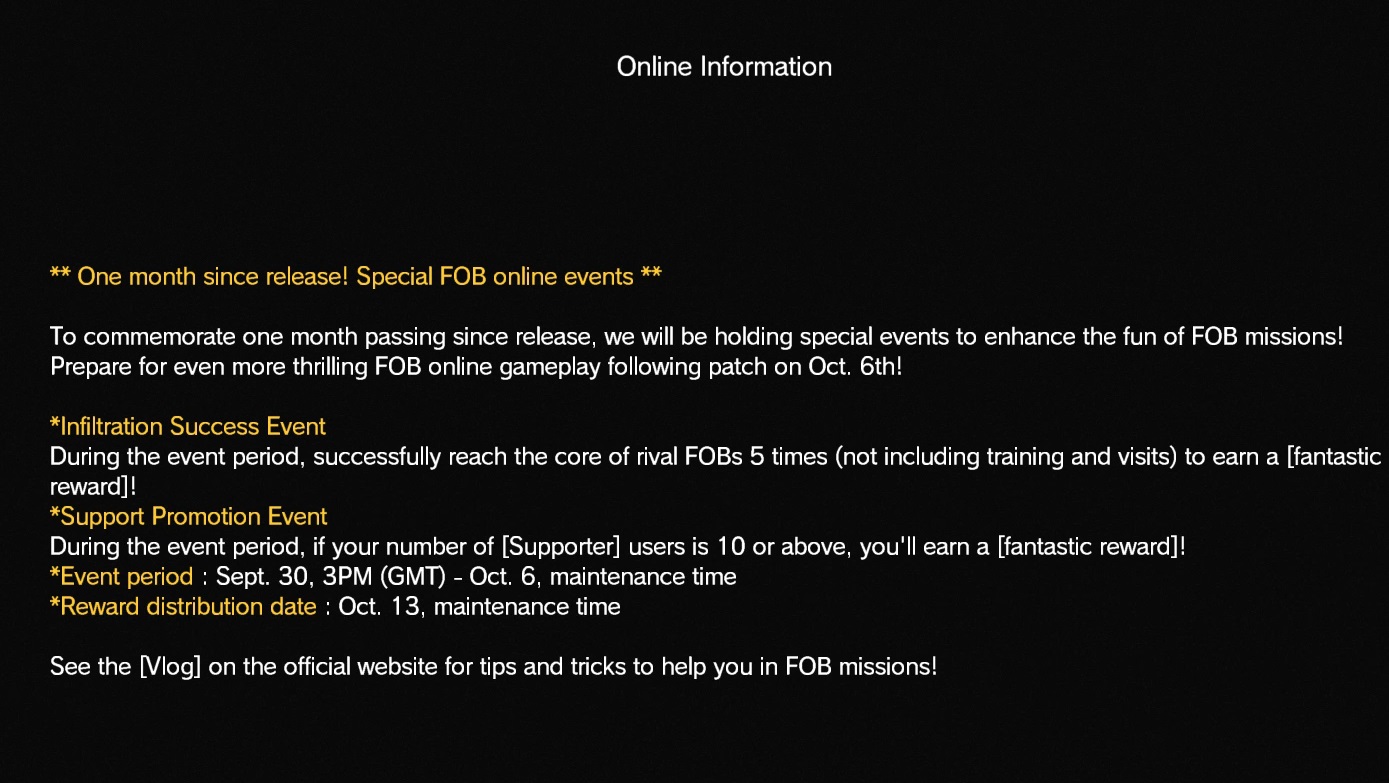 Until now, only the FOBs of rival players could be infiltrated, but following this update you will have access to special “Event FOBs” prepared by the game developers.
In “Event FOB” missions, there is no risk of retaliation (no defending player will invade your base later as revenge), so you can steal materials and abduct staff without fear of repercussions.

Infiltrate your way into an “Event FOB”!

Your FOBs are always at risk of coming under attack. Now, you can rest easy with FOB insurance (paid service). If you sign up for insurance, then during the insurance period you will be compensated for any materials and staff lost due to rival infiltrations.
* Staff/materials stolen by the rival will in fact remain on your base, and an identical amount of staff/materials will be handed over to the rival instead.
* MB Coins are purchased with real money, but free MB Coins are also distributed periodically as login bonuses, etc.
* The following are not covered by FOB insurance:
・Staff/items that are not fully your property, such as abducted staff being held in your Brig (FOB)
・Wounded staff (staff lost due to death or extraction will be compensated)
・Staff used by you to deploy in defense of the FOB (neither death nor extraction will be compensated)
・Nuclear weapons

Get ready for a broader, more varied range of missions available in Combat Deployment (Online). The rewards will diversify to match!
Some missions may reward you with extremely high-rank soldiers, and others may provide rare medicinal plants such as Haoma and Digitalis (Lutea).
Additionally, the time it takes your units complete their mission can be shortened using MB Coins.
* MB Coins are purchased with real money, but free MB Coins are also distributed periodically as login bonuses, etc.
* Deployment time can only be shortened in Combat Deployment (Online) missions. Normal offline missions cannot be shortened.

New weapons and items are on the way, to give you that added edge in missions. Additionally, where the highest possible grade of equipment was previously Grade 6 (★6), following the update you will have access to development projects of Grade 7 (★7)!
The following are just a few of the new weapons on offer.

This Grade 7 pump-action non-lethal shotgun sends enemies flying at close range, with enough power to knock an enemy out cold with a single hit.
Arming your FOB security guards with this will give greater punch to your FOB defenses.

A Grade 7 magazine-fed grenade launcher. Using a drum magazine gives this upgraded weapon a much higher ammo capacity.
This is an ideal choice for quick tactical decisions during a firefight; use it to suppress (or take out!) multiple enemies with quick blasts over a large area, or punish enemies hiding in cover.
A versatile launcher that can be used for assault, diversions, or FOB defenses.

Upgraded to Grade 7, this 7.62mm semi-automatic sniper rifle provides greater power and accuracy than before.
An additional option slot provides extra customizability, so any user can adapt the weapon to a range of scenarios. Equipping your FOB security guards with this is a surefire way to send invaders back with their tail between their legs.

Night vision equipment can now be developed for your Security Team staff!

You will now be able to develop special NVGs for your security guards, to give them an advantage against night-time invaders and vision-restricting tactics such as smoke grenades. Don’t miss this opportunity to maximize the abilities of your Security Team.
Develop NVGs for use by your security guards

Infiltrate without leaving a trace!

If you avoid being spotted by enemies, and refrain from killing/extracting staff and damaging/extracting containers and equipment, you can now play all the way through an FOB infiltration without the rival player being notified. Enjoy this added thrill to your FOB Missions!

Constructing new platforms for your FOBs takes a long time, but now you can use MB Coins (paid service) to purchase time reduction and speed things up!
The more platforms on your FOB, the more difficult it will be for a rival to infiltrate unseen.
* MB Coins are purchased with real money, but free MB Coins are also distributed periodically as login bonuses, etc.

Following the update, there will be certain improvements to the way data is displayed on menus such as the Controls and Results screens; for example, detailed breakdowns of espionage points earned or damage suffered due to your FOB being infiltrated. Look forward to a tighter, more refined FOB Mission experience.
View breakdowns of the espionage points you earn
GMP and materials limits are greatly increased online!

Following this update, the maximum amounts of GMP and materials you can possess will be much higher than before, as additional amounts can now be stored online by the server.
* You will need to be online to make use of GMP or materials amounts that exceed the local limit (the limit when playing offline).
* While offline, you will not be able to make use of GMP or materials stored on the server.

Improvements have also been made to other elements, including PF Rating, which indicates the strength of your Mother Base, and sort functions on the mission deployment prep screen.
Also, for auto-assigning staff to units, an option for prioritizing the Security Team has been added, to make FOB Missions even easier to enjoy. Various balance adjustments and bug fixes have been implemented as well.