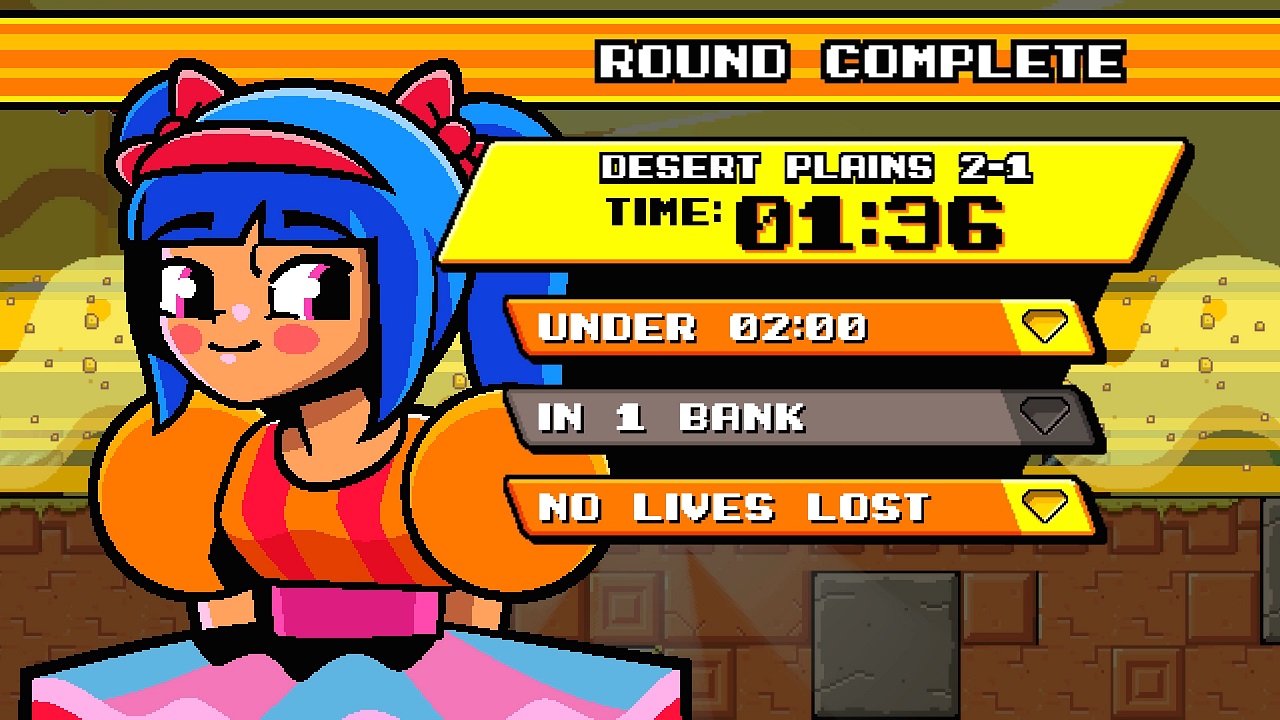 Mega Coin Squad is another of the id@Xbox games (Big Pixel Studios and Adult Swim Games) to grace the Xbox One console and offers some fast paced coin collecting shenanigans following a brief introduction from an assortment of hard up heroes. The premise is as simple as it gets, collect the coins and bank them in the grinning piggy bank and then move on to the next area. Rinse and repeat. Naturally as you move across the varied themed zones the stages become progressively harder to collect the coins which then brings into play a the mechanic of whether to collect fewer coins, bank them and then collect some more versus the riskier collect the required amount in one go and then bank. The latter offers much more challenge because if you get hit by a projectile, an enemy or explosive you’ll lose a set amount of coins you’re carrying so as you can imagine, if you’re nearing the target amount and get hit then it’s time for some hair pulling.

As mentioned there are five characters to choose from with each possessing a set of stats relating to speed, acceleration, weight and power. Once in game you’re able move around freely by running and jumping with the additional super dash move which not only allows access to higher parts of the destructible and morphing levels but acts as an attack against the numerous floating enemies who home in you. There’s an optional ranged attack move which can be upgraded by picking up weapons but this is not as effective in some instances as using the dash to simply ram everything in sight. 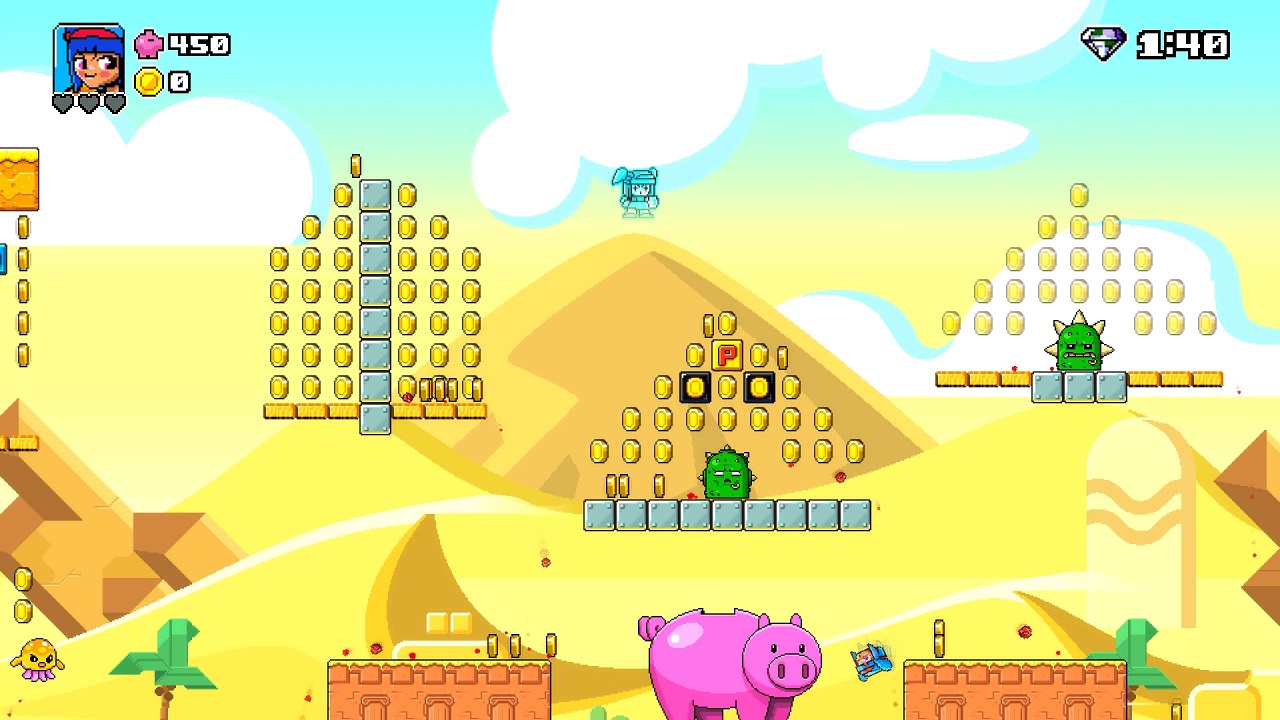 The game is easy to pick up and play for a quick burst here and there and offers little to no real depth aside from when to bank the coins during stages. The only real criticism lies with some of the moves not pulling off when you want them due to the responsiveness of the controls resulting in being hit or worse losing your last life, but due to the fast paced nature of the game is easily forgiveable as you can jump right back in where you left off anyway. If you’re able to fulfil certain criteria such as not being hit, beating the stage timer or banking in one go you’ll be awarded a bonus which can be selected between stages and offers a power-up to your character, bonus or weapons upgrade.

Mega Coin Squad follows the tradition of providing some old school visuals and audio which give it a quirky look which will appeal to those who love the old school games. There’s a bit of Super Mario and Bomb Jack here and it works well as an ode to times past. In the longer term there’s a leaderboard to compete with and if you’re down with three other friends a spot of local multiplayer is available for competitive play. 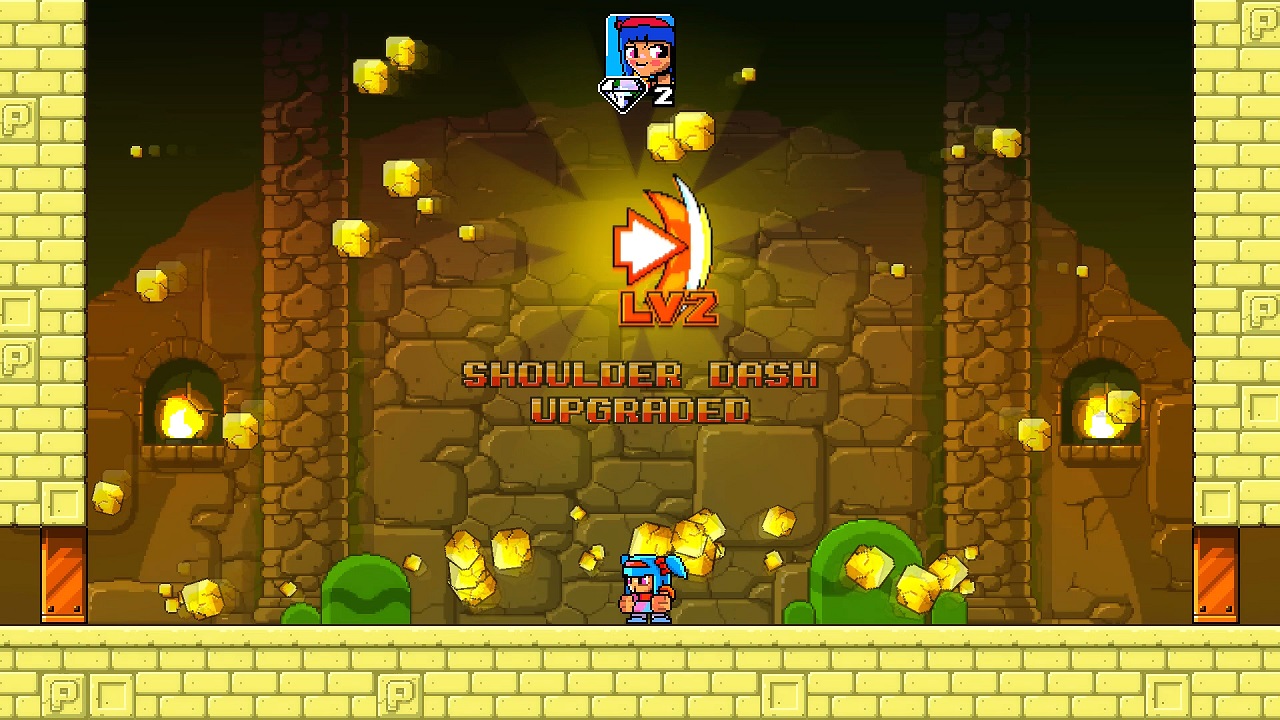 Mega Coin Squad is a simple and effective game that doesn’t pride itself in being overly long and drawn and out and simply gets down to business right away with basic gameplay and visuals. It’s a mildly addictive game that can be beaten in a few hours or even less if you’re good. The real challenge lies in beating the high score of completing the game in under 20 minutes which is as hard as nails. If you’re not fussed about leaderboards then you might feel a bit let down with the lack of content, but if you’re the sort of gamer who spends the odd five to ten minutes between other games looking to let off steam or have something for younger viewers to play then this might be worth a look. Sadly the £12 asking price is a bit too steep and for what’s on offer and therefore isn’t good value for money which is a shame. If you can get the game at half the cost then it’s certainly worth checking out.