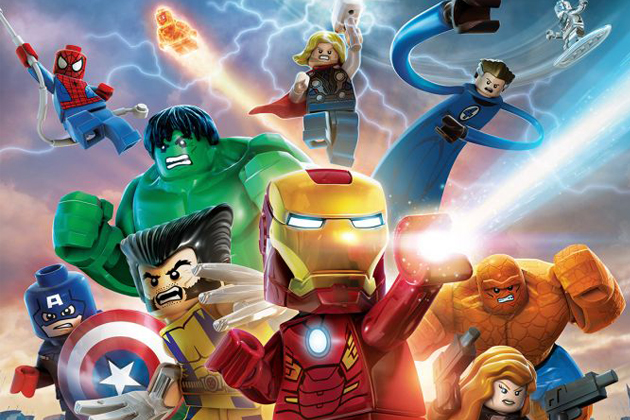 We take a look at TT Games’ latest LEGO game which features the mighty Marvel characters we all know and love in LEGO form. With the game being aimed at ages 7 and upwards, how well does it fare considering their past games have all been pretty top notch. Take a look at our LEGO Marvel Super Heroes video review for the full picture.

Today we’re taking a look at TT Games’ LEGO Marvel Super Heroes which is available on last gen and next gen systems and PC, although be warned that you’re likely to pay a premium for getting the current gen version (that’s Xbox One and PS4) due to its age more than anything else. In our tests we found there is very little difference between the two versions, so ultimately it’s a matter of preference in line with what system you have available.

As a game in its own right, LEGO Marvel Super Heroes follows the story of the good guys, that’s Captain America, the X-Men, Spider-Man,  Fantastic 4 and such like, versus the villainous Dr Doom, Magneto and the mischievous god Loki. Without spoiling the simplistic Saturday afternoon plot, the game gives rise to several levels which are streamlined and linear coupled with a more open ended New York City to explore. The former has players thrust into the shoes of set characters as players hot swap between them at the touch of a button and use their abilities to solve fairly easy puzzles. It’s here where players get to see the numerous characters in action and gives a wide representation of the differences between them.  Mostly, the levels include beating up the bad guys, smashing inanimate objects to gain studs, collecting mini kits and even rescuing the famous Stan Lee.  There’s around 15 levels in all, but these are shrouded in the open ended New York City which players can freely move around and discover more secrets and missions.

There’s lots to do in New York, including hunting down gold bricks, completing extra missions as presented by the enigmatic comedic character Deadpool, racing, helping out citizens and unlocking masses of Marvel characters.  For wandering minds at least, there’s always some distraction outside of the main story which is good for pick up and play moments, or when there are more than one players. Naturally, the game does off two player co-op drop in and out play which is also handy for when more people are huddled around the TV. Sadly, and this perhaps is more fitting to older gamers playing the game, there’s no online co-op which would have been a marvellous inclusion.

In terms of difficulty, the game is very easy to pick up and play, and in our experience, 7 year olds will have a great time with the game. The fact that players cannot really die and re-spawn in quickly, means frustration levels are kept to a minimum. The only real complaint here lies with some horrid controls for things like flying with Iron Man and perhaps are a little too over-sensitive when using vehicles. There’s also no option to change the aim controls inverted which might not be a problem for younger gamers, but does go against the standard set in most games over the last decade or more.

Graphically, the game looks fantastic with some neat physics effects when objects are destroyed, pleasant lighting and shiny characters that look as plastic as you would expect from LEGO. The interior locations are a little uninspiring though, bar one section set in the jungle which offers a neat change. However, it’s the fluidity and open nature of New York that is the visual tour de force which not only runs smoothly but just feels full of character.  Times Square with its LEGO themed bill boards, Central Park and even the Empire State are recreated to provide a rich and full playground to mess around in.

Audio is excellent as well and will have fans of the Marvel movies laugh out loud with some of the comments and remarks that are uttered throughout. The casting is top quality, and the script full of in-jokes that  will keep adults and younger players entertained from start to finish. Thor’s seriousness versus Hulk’s simplicity is just excellent here and really makes the game what it is despite some repeated phrases when free-roaming.

In terms of longevity, there’s  a lot of game here where completion of the main story comes in at around a quarter of the entire game. The rest is taken up with the unlocking of extras, side missions and such like. Players can expect to invest many hours and for younger gamers, it’s likely to last until the next LEGO Marvel game if one is ever made. So for value for money you can’t go wrong here.

To conclude, LEGO Marvel Super Heroes is an excellent game for youngsters and stands as a beacon of how to make a game for the younger audience. The game, is so enthralling that older gamers and adults alike will also find an entertaining ride to be had here despite the somewhat repetitive  and easy nature of the core gameplay. If you’re looking for a less serious game for your new Xbox One  or PS4 then this has to be it, although as mentioned, there’s little to no differences between versions across generations which is a shame.  All that’s really needed here is for TT Games to tighten up the controls and they’d have a perfect game for the target audience.