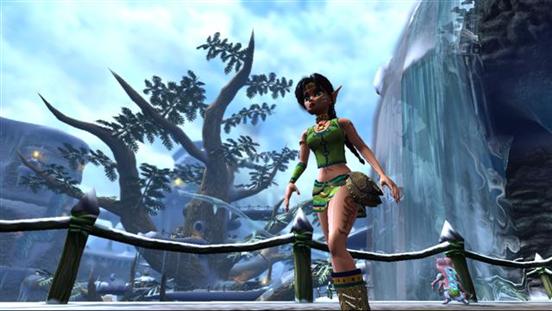 It must feel like quite an achievement for the Rare team to release two games for the launch of the 360. Whilst Perfect Dark Zero caters for the shooter fans, Kameo on the other hand appeals to the adventuring games players. Set in a fantastical magical setting filled with elves, dragons and trolls amongst other strange creatures, Kameo looks and feels like an adventure game to kick back, relax and get in to. The premise of the game is simple and tells the tale of lead heroine Kameo who has been granted powers to transform herself into strange creatures. What this means is Kameo is able to call upon these beings to help navigate the world and of course take care of a bitter and twisted rival sister who has unleashed a great demon onto the world. With the powers given to her, Kameo becomes a formidable yet feisty little character and ends up in many, to the death scrapes with the technology loving trolls she encounters throughout the game.

What makes Kameo entertaining is how Kameo is at liberty to change into a number of strange characters and let’s cut to the chase here as during the opening, Kameo loses all of her powers and therefore the main focus of the game’s story progression seems to be on re-acquiring these creatures. Each of the creatures and yes they are a weird looking bunch of characters too have their own set of skills to bring to the action. So for example Ash, the fire breathing dragon is handy for heating things up or in this case, melting ice blocks for items. Where as Pummelweed is very suited for going under stuff such as gates and of course he’s handy at dishing out plenty of punches during combat. Each one is unique and as you progress through the game you will have to use all of their abilities if you are to progress. Each character can also purchase upgraded moves when special fruit is found or given by looking off the beaten track and undertaking a side quest from one of the many inhabitants that you encounter.

Kameo’s combat, and there is plenty featured in the game, means that you have several ways to dispose of troublesome trolls. What is unique about having several characters at your command means that you can pick or choose which character to use at any given time during battles. What is a great feature is how the game slows down into focus mode which then allows you to perform easier combo attacks with multiple characters for example; In focus mode I could perhaps start off with Pummelweeds punches follwed by his uppercut move; which launches an opponent into the air. I could then immediately switch to Chilla and shoot ice spears at the airborne troll. This is perhaps the easiest combo to perform, but why I hear you ask? Well other than the satisfaction of doing cool moves you gain points for every enemy you kill which in turn unlocks more content in the game such as cheats, alternate costumes and much more. Then there are the world leader boards to check if you are interested. These show you how well you are doing compared to other worldwide players.

Kameo also has a secondary combat mode which allows players the chance to get stuck into some major pitched battles with the trolls. During her adventure Kameo has to cross the “Badlands” where the elves and trolls are at war with each other. At these points in the game there are literally hundreds of fighting elves and trolls. What is neat is that Kameo can simply jump on a horse and ride through the waves of trolls to her next objective on the map or she can get stuck into the battle and dish out some punishment which is great for practising combos.

Playing through the game is very easy and is catered for a wide number of player types. There are hint scrolls scattered across the game giving players helpful tips and advice. Then there is your book which gives you advice as well if you should choose and this is what is also appealing about the game. The choices are laid out before you and how you play the game is down to you. Whilst on the surface the game may play and feel simple there does become a point where mastering combo attacks and attaining high scores by avoiding being hit become quite difficult and therefore presenting a worthy challenge to more experienced players.

There’s no doubt that Kameo is a lovely looking game which blossoms full of colour and vibrancy throughout most of the game. The character designs are very unique and Kameo looks very much a part of her world as she animates smoothly. The transition between characters is fluid and it’s nice to see Kameo’s body inside her companions as she controls them. The environments are suitably detailed and although there are repeated textures used throughout the game there is usually enough action going on to make it all look like a visual feast for the eyes. The water effects are very convincing despite looking a little strange at certain camera angles and the lighting simply great looking especially as the day and night cycle happens before your very eyes.

The sound can be described as well orchestrated, well voiced (for the game type) and fitting to every situation that presents itself (which includes the brief chorus that accompanies Kameo’s death scene). The sound effects are what you would expect from a game of this nature and really it’s the music that drives the action and that includes if you opt to play your own music over key battles.

Kameo isn’t the longest adventure game and if you are a competent player who decides to use all the hints then you might complete the story in a day. However if you are a player who likes to look around and undertake side quests then obviously the game will last a great deal longer. As mentioned earlier, mastery of the combat system takes time and experimentation. Being able to replay competed missions is also bonus especially if you are checking the leader boards. There is also a two player split screen mode which allows 2 players the chance to tackle certain parts of the game as a team. This mode might actually make it onto Xbox Live at some point which also will add a great deal of replay value.

Kameo is a welcome addition to the launch line up of games and really shows off some of the effects that the Xbox 360 can do at this time. The game play is solid throughout and never overly complicated. The combat is fluid and intuitive especially if you scratch beneath the surface to find a rewarding combo system in place. Kameo is great game albeit a little short and perhaps a little too easy to just breeze through on a first playthrough. I think most gamers could enjoy this game and as a showcase of the system I’d say its well worth a look. 360 owners can also download a demo of the game via the Xbox Live marketplace. A rather cool and luxurious adventure.