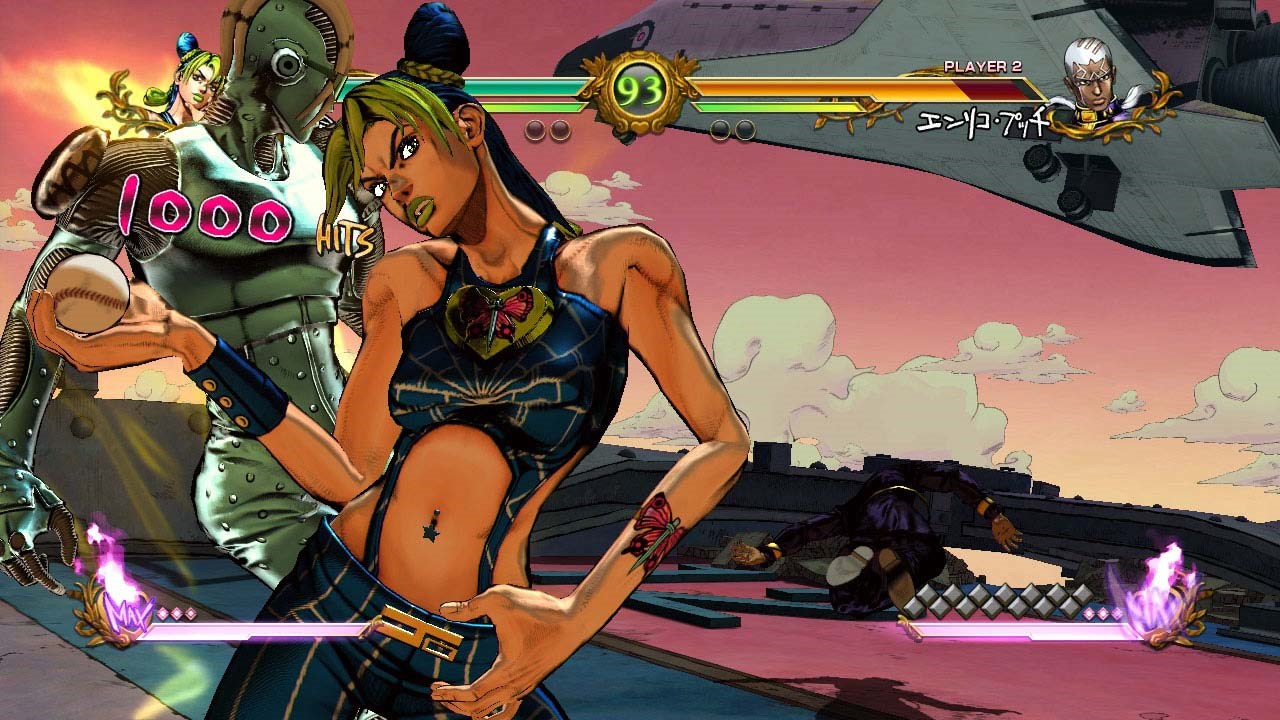 We take a look at Bandai Namco Games and CyberConnect2’s 3D anime inspired brawler on PS3 and determine whether this fighting game is worth the price of entry for those living outside of its manga Japanese home. Take a look at our JoJo’s Bizarre Adventure All Star Battle video review for the full picture.

Today we get down and dirty with the crazy cast of characters as seen in CyberConnect2’s 3D anime inspired brawler JoJo’s Bizarre Adventure All Star Battle which has finally seen a western release on PS3 after quite some time being available in its native Japan. The game offers a usual assortment of fighting modes which includes the rather flamboyant story mode, a downloadable campaign mode which sees players fighting agaist AI bosses, a versus and practice. By today’s standards, there’s a real lack of modes on offer here which is shame, but the good news is, what is available is fairly accomplished and solid fun to play.

Starting with the story mode, players choose from one of 7 characters parts, which then offer rounds versus an assortment of characters. It’s suitable window dressing for those that care about the relationships each character has. There’s a bit of text, prior to fights and then a bit of banter followed by the actual fights which come thick and fast and may have you swap roles on occassion unlike other games where one character is chosen for the duration. Whilst nothing new, in context it fits with the flashy and often over the top presentation the game provides in spades.

In terms of combat, players can unleash several attacks using one of three buttons, and then combinations of the three to create more powerful attack moves. It follows the usual template of building up a meter which affords great heat attacks or GHAs to be unleashed which can decimate opponents on low health. There’s also a handy dedicated evade button which is great to have available and most useful if you’re wanting to progress beyond turtle style blocking and countering which requires a bit more precision. What’s noticable about the characters and their attack moves is how speedy they are and the relative low damage they cause. However, in story mode at least, there are often set parameters such as half health bars, or low attack and defence to be aware of, which can be negated by spending earned credits on modifiers which ultimately can help out against the more troublesome foes. That said, the game follows similar move inputs to Street Fighter, and is fairly easy to pick up and play. Even button mashers will find some moments of easy successes here. Aside from the story, players can duke it out in the standard Arcade mode versus a set number of foes, or simply go versus against fellow humans or AI controlled combatants. There’s over 30 characters included in the standard game with several being unlocked via the story and more being made available via downloadable content. If there’s any real critism here it has to be leveled at the rather basic pretense of the story which does very little to provide much details about any of the characters and their plight. It’s all bare bones and text based which is a shame given the impressive visuals of the characters when they are fighting.

The game’s looks are ultra slick with a sense of wackiness injected into the menus and an abundance of colourful visual splendor during bouts from the often camp looking and downright weird roster of combatants. The over the top special moves and the addition of “stand” sidekick characters makes the game look quite unique which is a good thing. The inclusion of stage interactions is also welcome, but not something that truly impacts the game as much as it could, and simply acts as an additional layer of eye candy, to an already full on game.

Audio is top quality and fitting to the visual onslaught with a range of screaming guitars, vocal characters who are voiced in their native tongues and sound effects that pack a punch. Turning the speakers up is optional, but certainly well worth it to get the full force of the audio here which is simply as creative as its visuals in many instances.

In terms of longevity, the game can be beaten quite quickly, but the true test comes with mastery of the characters and then upping the challenge. The campaign mode seems to offer a bit more long term play for unlockables as well as a versus option to take the fight to the online sphere and beat down other human players world wide, although it has to be said that players should be wary of connections with those further afield as latency issues do make themselves well known.

To conclude, JoJo’s Bizarre Adventure All Star Battle is a fascinating game to watch, and even more engrossing game to play if you like weird Japanese manga characters in the vein of the more popular Fist of the North Star series or even Naruto. Whilst certainly not the same in terms of looks, does offer familiar mechanics that sits well with seasoned and beginner fighting game fans. The only drawback here are a lack of modes overall and a story that could have been so much more given the source material offering so much flamboyancy. That said, if you like fighting games then this is well worth checking out on PS3 and is one to break out to let off some steam from more serious fighting offerings.