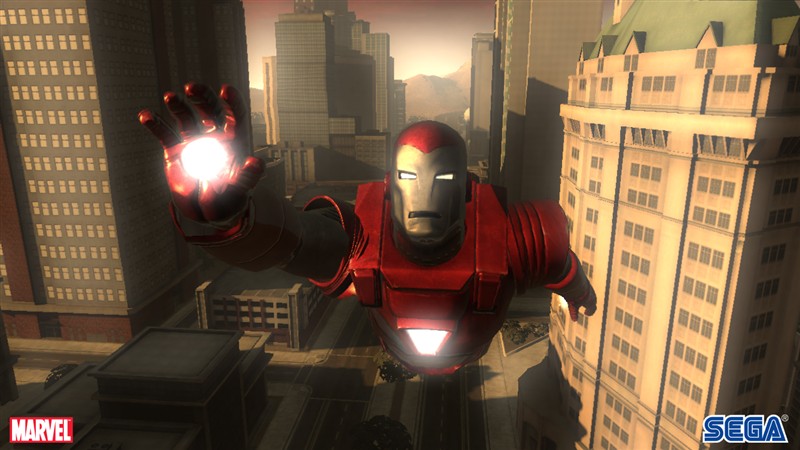 The movie Iron Man has just released and thus far has received reasonable responses from movie goers. SEGA has enlisted developer Secret Level to recreate the movie experience in the Iron Man video game. Movie tie in games have always been regarded as poor efforts by the more hardcore gaming masses, but whether this sentiment is shared by the more casual gamers, it’s not so clear cut.

I’ve not seen the Iron Man movie, so I can’t really draw any comparisons between the plot of the game and that of the actual movie. From what I’ve seen, it appears that the game plot meanders around the movie story and adds some of its own bits here and there, whilst excluding some others. Is Iron Man the video game any good though?

If you like old school shooting games in 3D then Iron Man might just be the game for you. As Tony Stark, a brilliant engineer and scientist and the game’s protagonist, you begin your game time somewhere is the middle east as a captive of local militia. Imprisoned you put your creative skills to the test in an attempt to escape. This is where the concept of Iron Man is born and from here with your AI Jarvis, you’ll be entered into a mini tutorial of sorts which introduces you to ranged attacks with missiles, lock ons, melee combat and up close killing with a flame thrower. The game doesn’t pull any punches and at this point is lifted directly from the movie, although excluding the plot element of how Tony is captured in the first place – (watch any of the trailers to get a good indication of how this happens). The first tutorial mission is unlike any of the other missions in that you are grounded and basically run through a linear path to a boss at the end. It’s restrictive, but not indicative of the subsequent missions.

After beating the tutorial mission you are thrust into the game proper and it’s here that you learn the nuances of the Mark III Iron Man suit. As a character and designer of weapons technology, Tony’s experiences lead him on a personal crusade to actually prevent his weapons and technology falling into the wrong hands. He most certainly has a guilt complex, and although a great mind, he’s somewhat pushed into the hero role due to big companies, and extreme militia taking on his weapons of destruction.

The first thing gamers are going to notice when playing is the dual controls set up, which takes some getting used to. With the Left Trigger held in fully, Iron Man will rise in a vertical fashion. With the Left Trigger pressed lightly, Iron Man will hover like a Harrier Jump Jet. Using the Left thumb-stick moves Iron man in any direction during hovering and allows you to view ground targets with the right thumb-stick. a simple lock on feature is used to highlight targets in view (often focusing on the nearest threat). With the A button you can boost move in any direction to avoid in coming fire and naturally you can rise and drop to avoid the masses of missiles that come your way. What is neat is the option to catch missiles with the B button and throw them back at targeted enemies, although your timing to do so has to be pretty precise.

The second part of the control scheme is the flight mode which is activated using the Left Bumper (held in). In this mode Iron Man is able to cover distances far quicker and with the A button held can boost his speed further. During this mode you’ll be able to barrel roll and then on a dime, stop and resume hovering, or land on the ground to start melee combat with ground units. It’s all a little fiddly at first but after 20 minutes of practice, most gamers should get the hang of it. It actually is quite refreshing gameplay being able to switch between ground melee combat to air combat.

The game’s levels are all open spaces to accommodate the fact that Iron Man can fly at great speed. What’s more they are filled with an assortment of enemies that seem to all want to shoot at you simultaneously; your task being to simply wipe out the targets as quickly as possible – or occasionally tackle a boss character. There really is little stealth involved here, although I found a good tactic was to attack the targets at range before getting in close. In many instances it just felt like there were 50 missiles all hitting me and 100 bullets, especially from behind. The game seems to respawn enemies behind you at times, which proved to be pretty annoying, and in some case the enemies seemed to continually respawn, meaning you couldn’t just clear our an area. I found the enemy’s accuracy to be sometimes too accurate and on the default normal setting there were numerous occasions when I was totally frustrated with the game and ready to throw the controller at the TV (thank God I didn’t). In this respect, I think the game is going to be a little too hard for some gamers, although luckily you can go back and replay completed missions to try and gain some extra cash to help level up your suit – by completing Hero objectives and beating in a certain time and/or killing a required number of enemies.

Between missions you are able to tweak various aspects of the suit and in my experience I found this a crucial element to being successful. With money gained from completed missions you are able to upgrade things like weapons power to shield strength and even flying speed. You can then choose what load-out you use prior to each mission. In my experience, you’ll soon enough find if you’ve selected a load-out not suited to the mission as you get wiped out over and over again. Another neat feature during missions is being able to re-route your power to four aspects of the suit which results in focusing on weapons power or health recover etc. These can be routed on the fly and can make a considerable difference to the combat. Again, careful planning is required due to the rather unforgiving nature of the enemy.

Graphically Iron Man looks reasonable, with a decent character model for the actual Iron Man suit, which certainly looks metallic enough, with its shiny reflective surfaces. The rest of the game’s graphics are average at best and although the open world flavour is conveyed well, there just feels like a lack of attention to detail. Luckily you’ll be too busy focusing on the incoming fire to really notice the blandness portrayed in the environments. Everything runs very smoothly although I did notice some minor screen tearing issues from time to time. Between missions you are treated to some movie like sequences which show off the movie cast in game form. Their likenesses are good but not great, and I found it amusing that they gave the actress Gwyneth Paltrow a boob job in game (something the camera seemed to focus on a hell of a lot during scenes which featured her). During gameplay, you will notice a lot of repeated enemies as well as some forced melee animations where you have to tap the B button repeatedly to break tanks and snap the rudders off helicopters mid flight.

The sound is pretty typical in game with some uninspiring music that seems to chug along in the background amidst the shooting and explosion sound effects. The real star seems to be Tony Stark himself – voiced by Robert Downey Jr. who plays Stark in the film.In fact all of the cast from the movie lend their voices to the game and whilst not all performances are amazing, Tony’s wisecracks and comments add some humor to the game and inject some much needed personality to the overall blandness the game exudes.

Iron Man the game isn’t the longest of games and can be completed in around 6-8 hours depending on the difficulty you select from the off. As far as replay value is concerned then you can try your hand at the hard setting or for added challenge try one of the unlocked suits which can be gained from completing challenges outside of the story mode. I found it fairly easy to rack up over 800 achievement points from a single play through, although as previously stated, not with out much cussing and temper tantrums. There’s no multiplayer involved here, so replaying levels and completing Hero objectives is the main focus of replay value.

As movie tie in games go, Iron Man sits neatly on the pile and follows the formula of being decidedly average at best. There’s nothing here that really stands out to give a “wow” factor. As a compliment to the movie, then sure the game will garner some fans because effectively you can be Iron Man, however the difficulty on default settings might just alienate some of the fan base. Perhaps the developers made some levels overly difficult to increase the longevity of the game, who knows? Either way, if your looking for a simple old school style shooter, then Iron Man is certainly worth the rental. Beyond that, you’d have to be one of the biggest Marve/Iron Man fans if you were to go the whole hog and buy the game. Some fiddly controls, bland levels and simplistic gameplay make for an un-engaging gameplay experience that is best tackled in small doses. Oh and Paltrow’s boobs are always worth a look to see how well rendered they are.