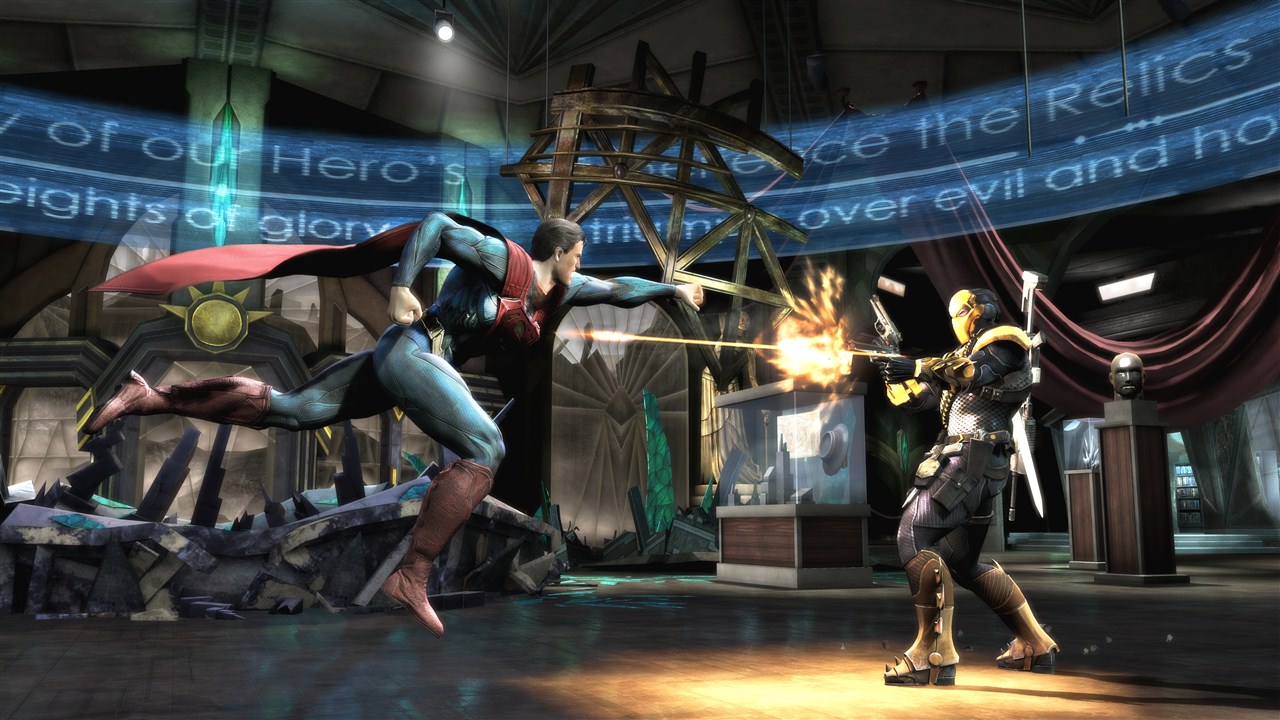 Ed Boon and Netherealm Studios already wowed us with their remastering of the Mortal Kombat series and proved that telling stories in fighting games could be handled really well and in a manner that doesn’t patronize the player. Well it seems on the coatails of Mortal Kombat’s success, someone somewhere suggested placing superheroes from DC Comics into the mix instead of the motley crew of mortal kombatants; the question is does it work?

Well of course it does, although unlike Mortal Kombat there are some changes which aren’t for the better. We’ll get our grievances out the way early on. So, gone are the bone shattering X-ray specials, which whilst they didn’t make much sense, were still pretty brutal and stylized – adding much character to the game. Also there aren’t any finishing moves which is a shame although these have been worked somewhat into play rather than as ending extras. You see, superheroes aren’t like regular folks, in terms of their power and of course their attitudes. Sure, the bad guys are always bad, but the good guys always take the moral high ground and would rather capture, than maim and kill, so in this regard you’re not going to see Wonder Woman decapitate Batman and punt kick his head towards the camera whilst maniacally laughing – perhaps something one would expect from The Joker, but it’s not happening here. In fact, Injustice is rather tame with the gore in comparison sake and therefore doesn’t feel so visceral and pleasurable for the more sadistic player.  But this isn’t Mortal Kombat, and there are rules to follow, so instead combatants kick the hell out of each other until there’s a genuine K.O.

The game makes up for its shortcomings when it comes to ultra violence by offering some handy special moves during play that seem indicative of the character. Joker for example uses chattering teeth as a special and a number of comedy projectiles. The game is fairly easy to pick up and play as it uses the same move set as seen in the Mortal Kombat. However, chaining moves together requires a bit more skill and learning – so much so that the practice mode now actually includes things like frame data.

What’s perhaps the biggest draw aside from seeing Superman getting his butt kicked by lesser opponents, is the way the combat looks. You can’t escape the fact that stage interactions cause some real batterings when positioned correctly, and the aforementioned super moves are a sight to behold, especially as their deployment is rather tactical. With the inclusion of areas within stages and a cool wager system where players can gamble their super meter, the combat does feel rather epic for players watching and those taking part. There’s a lot of character thrown in to really spice things up which had us in tears of laughter, for example, at one point we simply played catch with a pig carcass until one of us bit the bullet, or pork. Despite being really silly, it was  a moment to be savored just because it was in the game and we could do it. The fact that there’s so much seriousness with the characters made the more comical moments stand out.

So what players can dip into is a cross dimensional story (how original) which somewhat allows the same characters to fight each other (nice one fellas). This will take a few hours and level up your overall points; although it has to be said, the presentation is top notch and pretty tempting to put the pad down and just sit back. The story is broken down into chapters which can be replayed at will, but also feature some odd QTE moments which perhaps feel a bit unnecessary – despite having an impact on fight health bars.

Players can also dip into a standard Arcade mode entitled Battle, although there’s a twist as players can tweak the settings (once unlocked) and have modifiers to change the opponents and style of play – for example constantly depleting health or survival mode.  There’s also a STAR Labs mode to battle through where players are tasked with performing specific moves and objectives during rounds making for a neat distraction to the main story. As always there’s a ton of unlockables to earn points towards and a motivation for lone players to keep on fighting which is always nice but perhaps a standard feature for most fighting games worth their salt these days.

Players can also duke it out locally in versus battles and take the fight online where up to 8 combatants can view and participate in King of the Hill and Survivor matches for experience points and of course bragging rights.

There’s no denying that despite some of the females looking a bit manly, and we won’t even mention the hinted size of Wonder Woman’s bust beyond the breast plate, the game’s looks are awesome with great stages, cool cameos from non playable characters and smooth uninterrupted gameplay. The audio feels just right and sets the tone, although sometimes there’s little distinction between some of the characters when they speak in their similar authoritative tones – you’ll also have to put up with countless repeated phrases which is bearable at least.

Injustice Gods Among Us is a cracking fighter that’s big on looks but perhaps a little tame due to licensing of the DC characters which somewhat makes it a step back from Netherealm’s own Mortal Kombat game. In this regard something is lost, but still leaves an impressionable outing that’s bound to please fans of the characters and fighting game fans alike. It’s also quite an accessible game for button mashers who just want to enjoy the visual element.  Therefore the game comes highly recommended for not just online players but solo players as well.