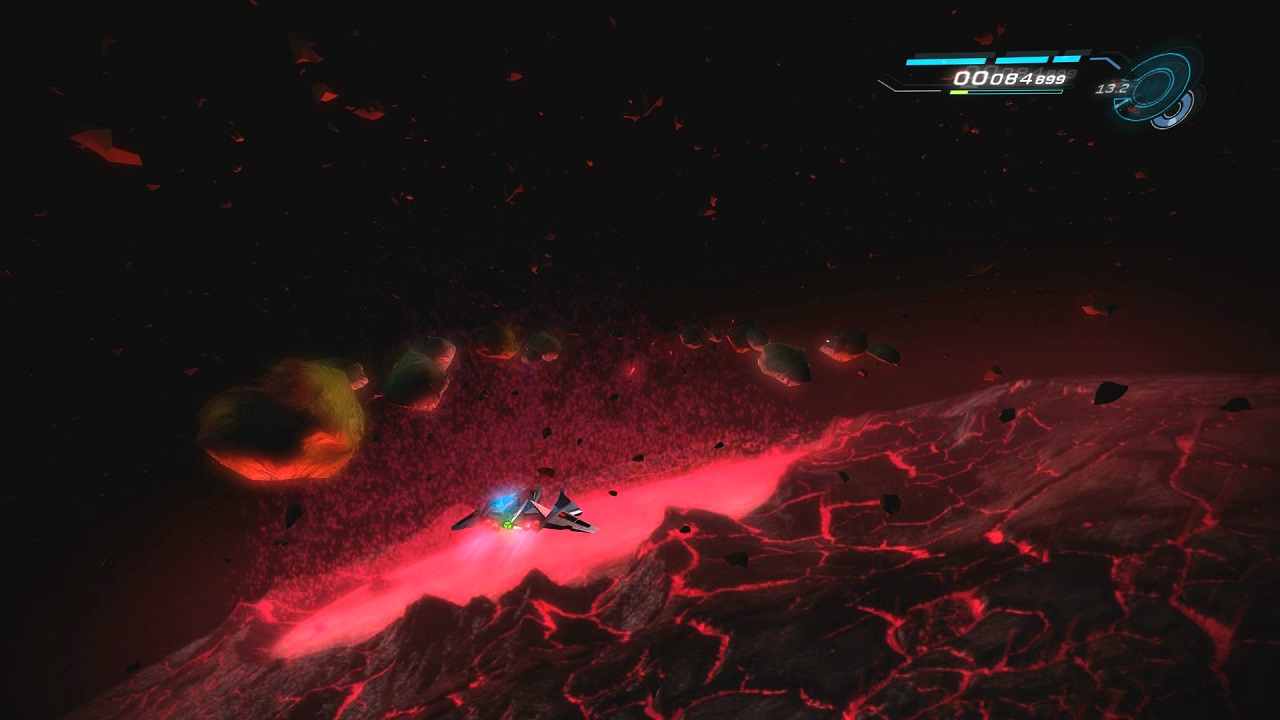 InFramez’s action packed space shooter Hyper Void comes full to the brim with plentiful shooting action as players delve into wormholes to reach even greater levels against a slew of nasties out to deplete your shields and turn you into space dust. Whilst it doesn’t use the same planes as top down or horizontal scrolling shooters it can still be described as a Schmup – that’s shoot em up for the uniformed.

Basically you move your craft around in a circular motion and hit distant enemies as they close in using three different weapons types attached to your craft. The weapons overheat and lose effectiveness if you overuse them so there’s some degree of being mindful of how you’re shooting. Get hit and your shields deplete…simple, except there are enemies and hazards that can kill in one hit and even a bonus unlockable Hyper mode which offers a one hit kill from any adversary. It works really well and with some funkadelic graphics and sound is a veritable assault on the senses.

There’s quite a number of levels to wade through of varying complexity where on one side you’ll be taking out mines and simple forms to the next where there are asteroids fields and bosses to overcome. Whilst the basic idea of lining up the ship and shooting remains the same, the variety comes from how intense the enemy attacks are. At some points you’ll be avoiding all sorts making for a deeply challenging game when the screen is filled with utter mayhem – thankfully you’ve got a side dash move when things get a bit too up close and personal. There’s really not much else to say about the gameplay, and although quite simplistic is engaging enough across the 28 levels on offer.

Hyper Void runs at a silky smooth 60 frames per second and as mentioned features swirling tunnels, masses of colours and contrasting tones to navigate. It looks good even if quite basic and harks back to old school shooters albeit with a splash of more colour. As with many games of this ilk the screen can be filled with masses of effects which make it hard to see what’s happening, but it’s during these moments where pure instinct takes over as you learn where your ship is at all times without breaking a sweat.

If you’re a fan of old school shooters and are looking for a reactionary shooter then Hyper Void is worth checking out especially as it comes at the low price of £7.99. That said, the game is quite basic with limited modes and extras which means once you’ve bested it, there’s little reason to replay again outside of the Hyper Mode. Still, there’s several hours worth of entertainment here which if you’re a fan of evolving backgrounds, strategic shooting and a pumping soundtrack to play alongside, then you’ll find a neat game here.