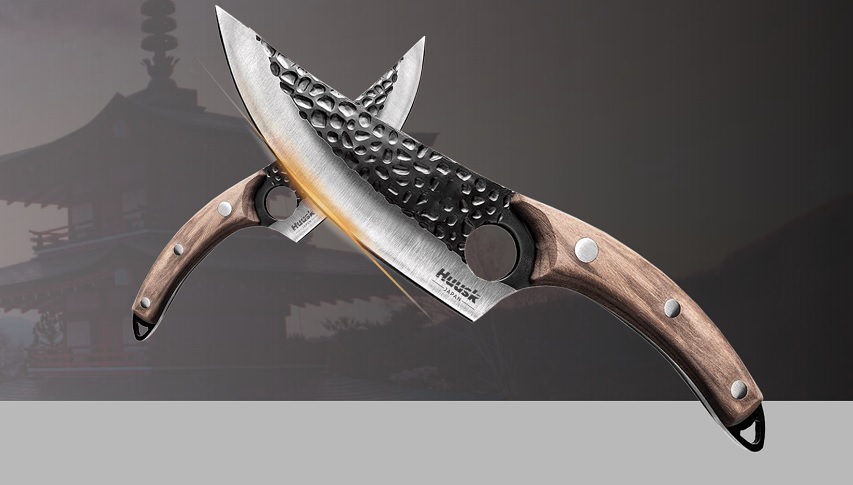 A bit of a departure from my usual gaming content but, I have done two reviews of the Huusk Knife, Huusk Knives, JapaKnife, Viking Knife, Huusk Japan Knife (whatever name you want to call them), on Youtube which you can take a look at below. For those not privy to those videos I would like to share my unbiased, independent opinion. Many people may have seen adverts on social-media platforms about Huusk knives which it’s claimed they are authentic Japanese knives. The claims also suggest they are forged using ancient Japanese knife making techniques leading to a knife that is sword-like sharp and one that is well-suited in the kitchen and out in the wilds. They are also always on special offer and priced at around £29.99 for a single blade. The question you have to ask is, are they any good though, and what of the outlandish claims?

Firstly, take a look at my original video review of the Huusk knife I purchased for £29.99 last year after being enticed by a Youtube advert. I guess, my mentality was that if it was advertised on Youtube then it wouldn’t be a scam. I am going to confirm that is correct. Most people who order one or more of these knives will receive the product. However, the scam or misleading part lies in the official advertising blurb and the quality of what you actually receive. Here’s my original review video below:

I found that initially once I received the knife (like most new knives), the Huusk knife was relatively sharp. It sliced through paper, meat and veg with ease. Now, months later and the blade still works but has dulled considerably and needs sharpening (something I have not attempted yet). It can still cut through veg and meat, but compared to how it was in the beginning, the process is not as easy. A good test is slicing through something simple like streaky bacon. This requires a lot more cutting action to slice through the fatty parts. If a blade is sharp, it should have no problem slicing through the fat. One could argue a dulling blade is “par de la cors” of knives with all the hard action against a chopping board, but contrary to the claims made on the Huusk website, the blade hasn’t retained its sharpness as much as Huusk Japan claimed it would or I would have hoped. Maybe if all I sliced were strawberries and cucumbers it would have.

Looking at the testimonies of people who also purchased Huusk knives, it seems I must have hit the jackpot because user experience seems to vary quite a lot. On-one-hand (like me) there are those who receive a fairly sharp blade, but on-the-other-hand, those who are shipped a dud being as blunt as a butter knife. I put this down to discrepancies in manufacturing due to its mass-produced nature rather than the claim of each blade being individually checked against an impressive 120 point checklist. Huusk Japan (a company registered in Lithuania and nothing to do with Japan) make it very difficult for consumers to return faulty products, where the cost of sending it back (which the consumer pays for) outweighs the cost of purchasing. My only advice here is to PAY BY CREDIT CARD so you can at least do a CHARGEBACK if required.

I discovered that Huusk Japan knives, are actually manufactured/mass produced in CHINA (as it says in the Huusk small-print nobody reads), and then purchasable in bulk with an option for a company name to be laser etched on them. The neat box with all the trimmings added as a bonus for larger bulk orders. When buying in bulk, these knives are obtainable as low as £2-£3/$2-4 per unit. Which brings me to my second review video which suggests to avoid the branded knives at ALL COSTS and simply buy the same knife (if you have to) for one-third of the price direct from CHINA. Take a look at the video below which compares the Huusk Knife with the same but cheaper knife purchased directly from Ali-Express.

The shipping from Ali-Express took some weeks from China, but once it arrived, the knife was exactly the same as the Huusk knife in terms of weight, shape, and sharpness. The only things missing were the logo and fancy box. Having used the knife (more carefully than the Huusk) it has retained its edge and is relatively sharp still some months later. However, they are the same knives aside from the handle colour difference. The bottom-line is, these knives are gimmicky and perhaps make for a nice gift for a male family member (it seems from my video statistics it’s mostly men who are interested in these knives). However, depending on whether you get a sharp knife or not, they do have limited use in the kitchen. I found the best use for these was chopping veg and fruit, breast of chicken and some breads. Anything more, and the curved blade shape and general lack of staying power means it’s liable to lose its quality very quickly. There are simply better blades you can buy out there, even cheaper ones.

To conclude then. Huusk Knives are mass-produced in CHINA, sold in bulk to various companies across the globe (who use ambiguous names) very cheaply, and then sold for a massive mark-up making someone very rich indeed. DON’T believe any of the claims made on their websites, and by-all-means if you’re going to succumb, then PAY BY CREDIT CARD, so if there is an issue you can at least get your money back. Another thing I have seen plenty of complaints about is ordering 1 knife, and then after checkout being charged for 3 or more. PLEASE CHECK YOUR ORDER BEFORE PAYING. The offer doesn’t ever run out (it’s a marketing technique) and the blade is not worth the asking price. If you must get one of these, then as suggested buy one from Ali-Express or similar Chinese outlet directly. That way you get the same product much cheaper even if the downside is much slower shipping. At least I can vouch that you do get your item after several weeks in transit.