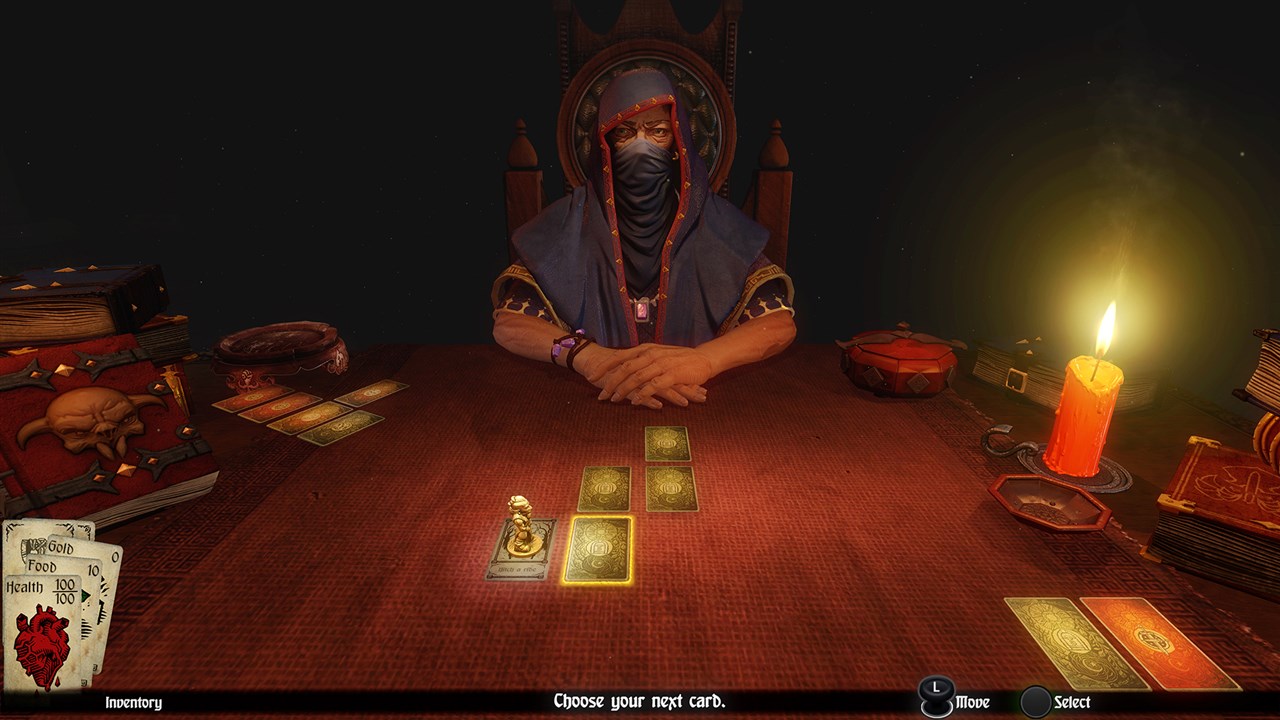 Defiant Development released their Kickstarter funded card based action role playing game for the Xbox One, PS4 and PC last week but is it any good and worthy of your time? In a nutshell looking at the basics the game begins with an ominous card master sat at a table with you the player facing off. The onus is simple, choose a deck of cards which relate to various aspects of an action RPG such as weapons, equipment and bonuses and then enter the randomness of what the dealer interjects. These range from wandering traders, mysterious encounters, treasure chests and of course enemy encounters. They are shuffled at the start of each round, placed face down in a pattern and from there players are tasked with choosing a path to reach the next stage by selecting a card one at a time. It’s an easy process to begin as very little is included in the dealer’s pack, but as you progress by defeating various boss characters at the end of each theoretical dungeon more cards are added alongside a number of buffs to your character and the enemies. What sets Hand of Fate in its own gaming realm is the fact the card based game is only half the experience, the other lies in real time combat where encounters play out with direct control of a singular warrior character. This is actually pretty neat and means those who aren’t so gripped by typical card based games can get a decent amount of enjoyment from taking control and fighting the various human and supernatural opponents. The combat is quite simple, but is cleverly tied to the cards, so weapons and bonus cards have an effect on how the combat plays out.

Being realistic, the combat is quite simple relying on counter attacks, stun moves and dodging to get by. However, as the game progresses more enemies are thrown into the mix making for some tight encounters as players get hit from all sides including from returning boss characters complete with their un-blockable attack moves. What’s also neat is how players have to take into consideration their food and gold supplies. At various points in the adventure certain morality cards are dealt which means offering supplies to the needy or even having them stolen can occur. As you would expect, if there’s no food then your character’s health depletes after every move, and when there’s no health left it’s game over and a restart of the current level. So a tactical edge is included here which makes for another neat layer to the gameplay. There’s also a bit of luck thrown in for good measure as you would expect.

In terms of visuals, Hand of Fate offers basic graphics that aren’t going to win any awards for best looking game, and are rather functional. As mentioned, the combat is quite simple using basic animations and low detail environments to get the job done but in reality it all works as intended. Sure, the graphics could be much improved but as an indie game there’s little to complain about as everything works as intended. 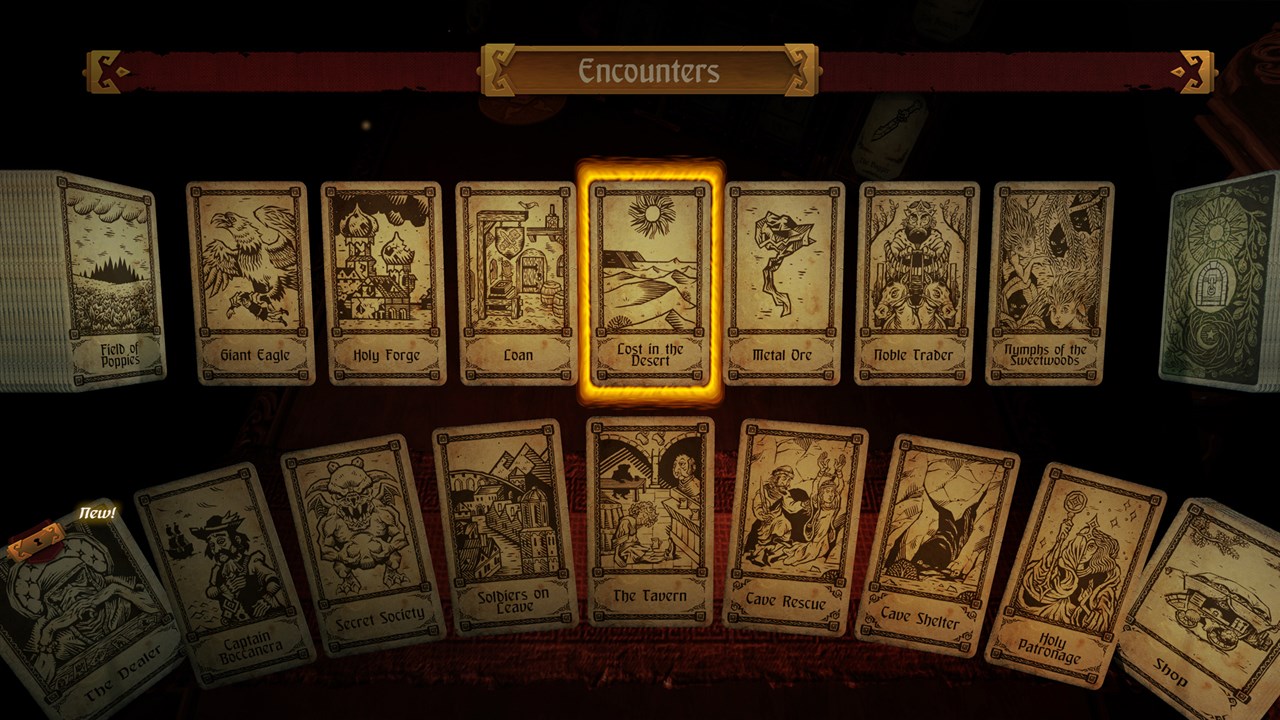 The audio is a different matter with some excellent narration from the deck master offering comment on pretty much everything that happens including when taking a long time to do anything. Some phrases do get repeated often but the general tone of the character is excellent making it easily bearable. It’s a shame there’s a fair bit of text to read and is not narrated as this would have added a bit more personality to the overall experience.

Players can expect to pump around 12 hours into the game’s Story Mode which acts as an introduction to the basics and the advancement of building up the deck of cards which players can choose to tailor themselves between each level or have it done automatically. There’s some closure here as the story ends but does mean it can be replayed if desired due to the random element. The real meat comes from the Endless Mode which simply mixes up all the cards and has players survive for as long as possible. There’s an online leaderboard here to peruse for bragging rights and comparison with friends which is a nice touch. 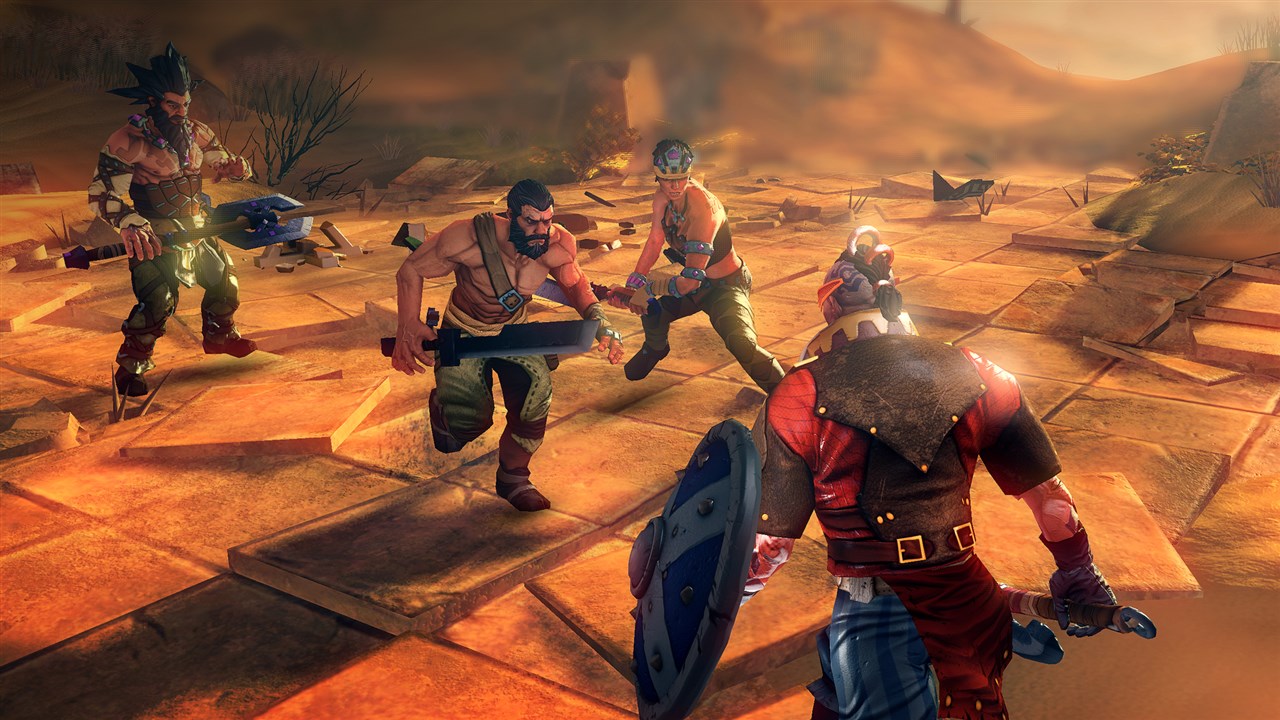 Hand of Fate is a neat game to sink some time into and offers an eclectic mix of traditional card based gameplay fused with real time action combat. For those who aren’t so keen on card based affairs will find much enjoyment here as the card aspect doesn’t require too much thought unless desired. Whilst the game’s progression feels a bit slow overall, and combat can get repetitive after prolonged play there’s lots to experience here which makes for a game well worth the low price of entry. If you’ve never tried a card based game before, then this is certainly an accessible game that will test the most ardent of players.