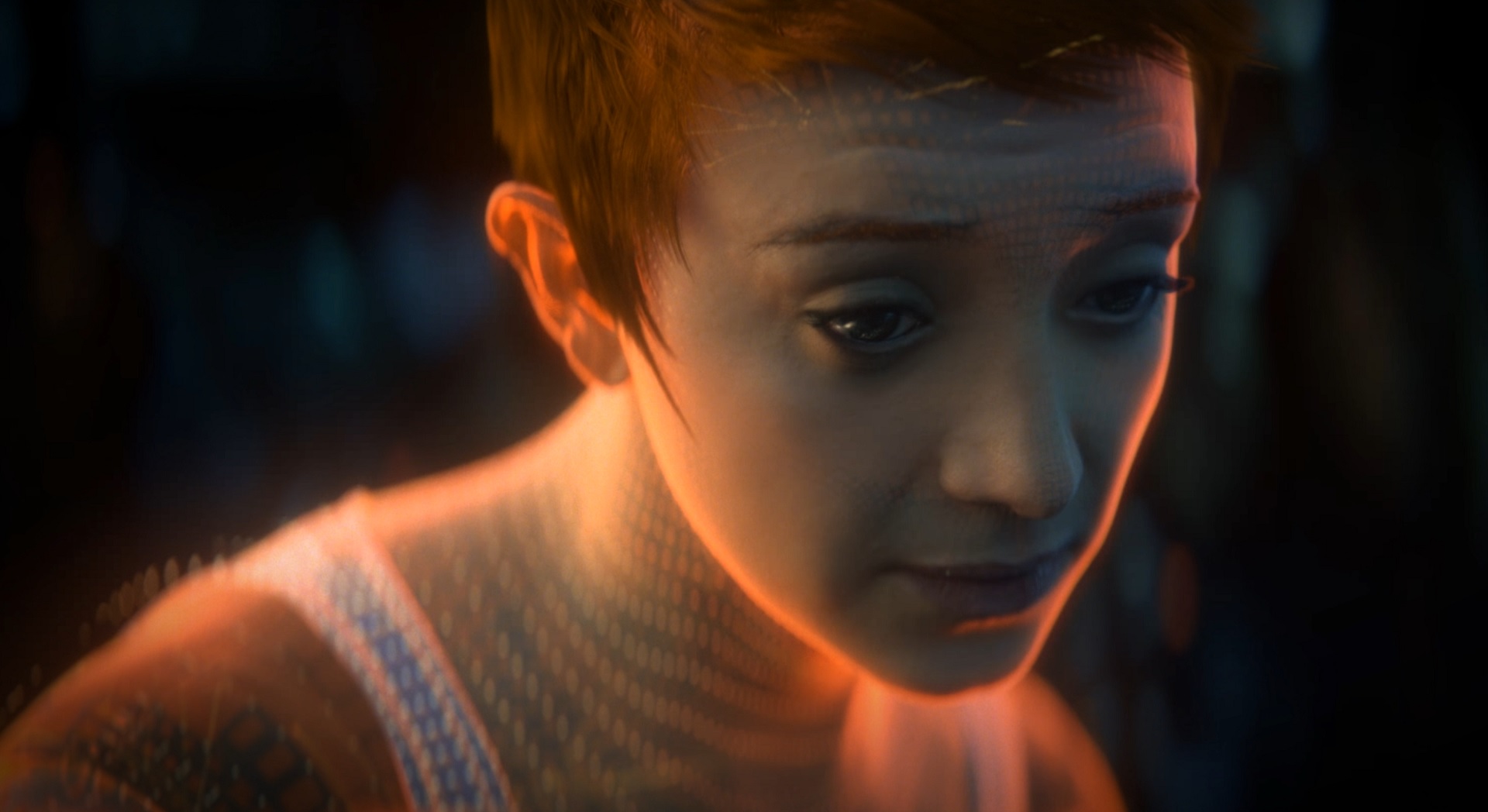 Creative Assembly released Halo Wars 2 on Xbox One and Windows 10 PC as part of the Microsoft Play Anywhere program. Whilst this is a neat feature in its own right, is Halo Wars 2 worth picking up?

There’s always been a constant battle with regards to how well Real Time Strategy games (RTS) work on consoles versus the PC in regards to the use of a controller versus keyboard and mouse. The original Halo Wars on Xbox 360 proved that controllers can work with a bit of gameplay tweaking and once again we’re at the same juncture with Halo Wars 2. It’s obvious you’re going to get a lot more options from using a keyboard and mouse but the way in which the interface and gameplay is tailored for console owners means you’re not going to be lost on Xbox One.

Control method aside, Halo Wars 2 enters familiar “Halo” territory with a new story campaign within its well-established lore set 28 years after the UNSC Spirit of Fire left Shield 0459. The ship’s crew has awakened from a deep cryogenic sleep to encounter a new threat from “The Banished” on Installation 00. Basically, to begin with it’s the UNSC forces versus a new brute leader Atriox and his raging forces comprising of other factions banded together. It’s an interesting tale and a neat way to learn how to play the game but offers much more in the way of replay value with challenges and secondary objectives to complete. There are 12 missions to tackle of varying difficulty but what’s cool is how the Halo games style is interwoven here which means finding skull modifiers and using those on subsequent plays to up the challenge. From the visuals to the characters it all screams familiar ground and with tight controls and gameplay that’s pretty easy to get to grips with means most gamers can jump right in without too much knowledge of strategic play. 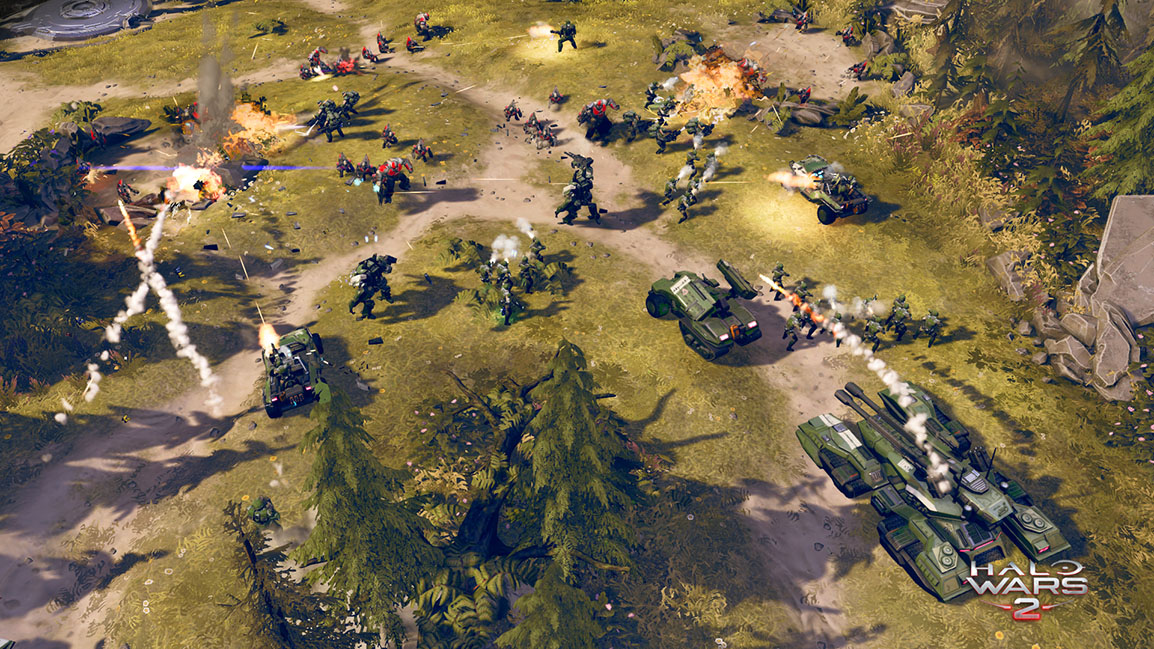 Halo Wars 2 isn’t necessarily an easy game although it is perhaps less challenging on the default setting and below. You’ll build bases, create troops and vehicles in a rock, paper, scissors type scenario which is quite simplistic in a way. Again, this aspect is well explained and somehow the campaign highlights these for you quite readily, so you’ll be fully aware of how well to take down the enemy banshees for example with your tailored ground vehicles. There are some cheap moments though where the AI simply ramps up its difficulty and blitzes your army with moves that are overbearing – no spoilers here. Players have to learn as they go along and perhaps try a different tactic. Thankfully you’re able to save anywhere which is a bit of godsend when these seemingly cheap moments present themselves. That said, it can’t be escaped the fact that no matter what extra challenges players embark on, the game is quite simplified especially when coming from more traditional PC based RTS games. There’s a lack of variety within the units simply because of the lore the game is based on which is a shame for those after a more cerebral experience. 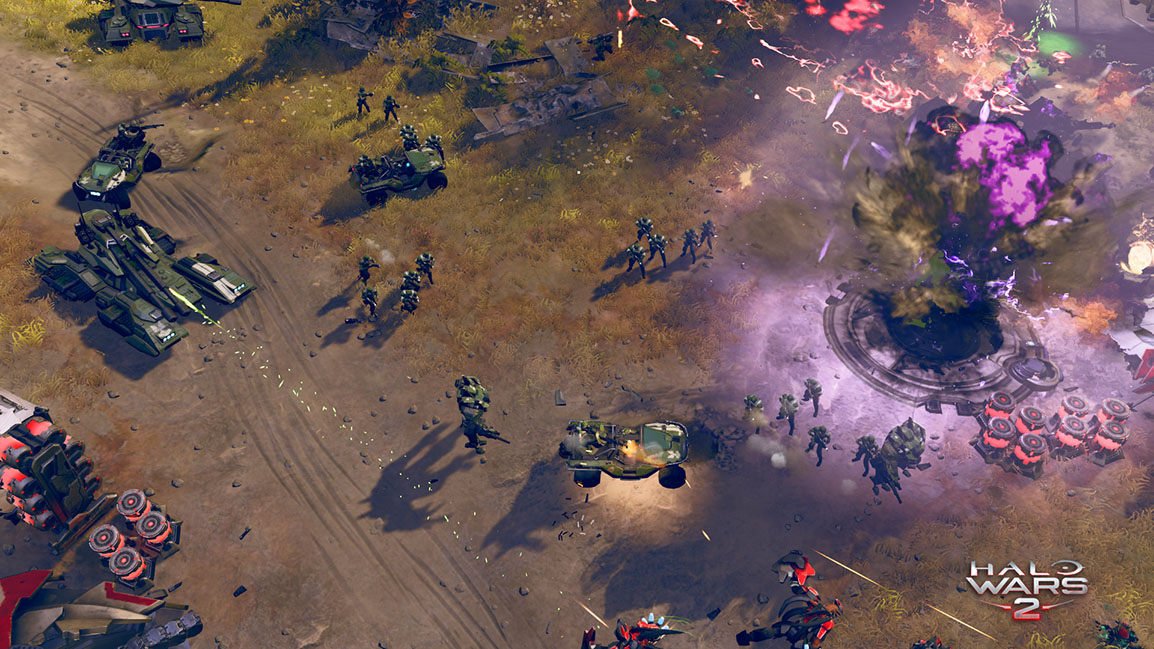 To accompany the campaign though, there’s a Blitz mode to mess around with which has you control points on the map for dominance and ultimate victory but is dominated by cards which you have to earn (or pay money for). You’ll also get to choose your commander in chief of which the few on offer have specific abilities to use on the battlefield offering tactical advantage in some areas of play. Skirmish returns and is perhaps the go to game for purists as it’s here you can tailor the game options to your own specifications such as 2v2 3v3 etc. There’s actually quite a bit to tinker with here which means you’re never short of ways to play or get hammered by the AI. Luckily there are ways to tip the balance in your favour such as setting the difficulty to “Easy” if you’re new to the RTS genre or couldn’t organize a drinking session in a brewery. On the whole, there’s an enjoyable game on offer no matter what skill level you posses which means Creative Assembly has certainly taken the best bits from the original game and mastered them here. 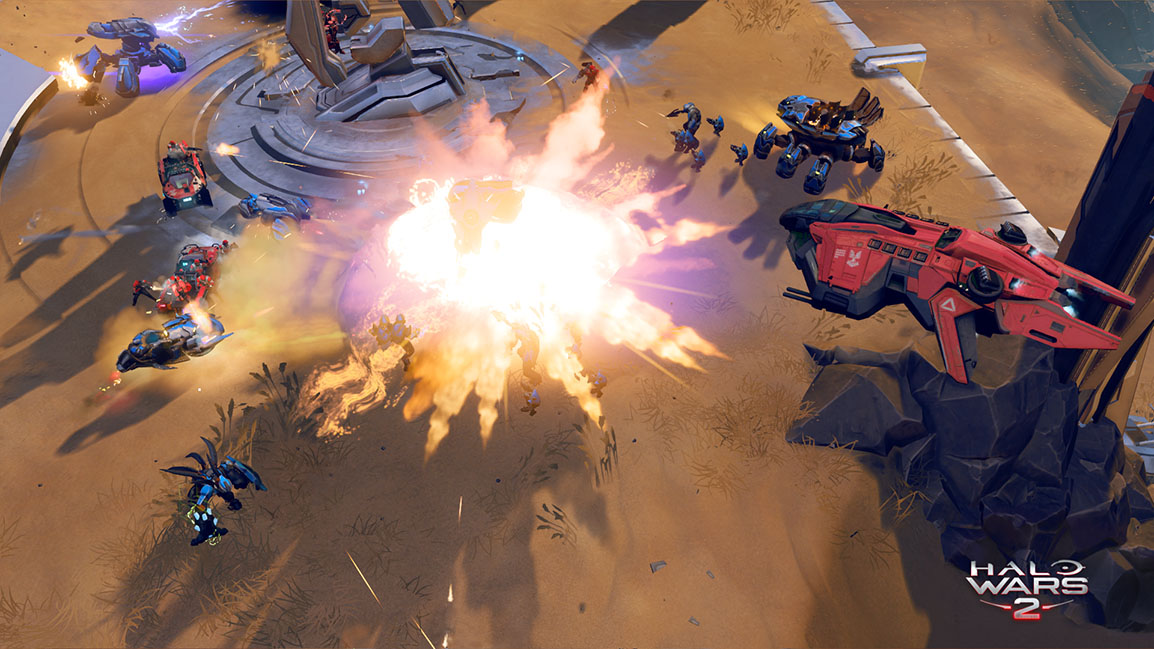 In terms of visuals, the game looks rather fantastic with some excellent variation across its themed levels/maps. You’re free to move the camera as you wish and there’s an option to zoom in pretty close to see your units in action. Sadly, and perhaps this is a complaint for a number of games in the genre, you can’t pull the camera further out for a greater look at the surrounding area which is a shame because in some instances the option would be quite helpful rather than having to warp between units scattered around the battlefield. Understandingly there’s the issue of performance and tactical edge if the option to pull right back was available, but it just feels at times it’s a technical limitation rather than a gameplay feature. Aside from this though, there’s no complaints against the visual quality here especially in 4K on a Windows 10 PC.

Audio is also of a high standard with a rousing score and solid performances from the cast via the high quality cut scenes and banter on the field. Little can be faulted here and it shows no expense has been spared with the presentation.

Whilst players of skill will be able to breeze through the campaign fairly quickly and easily there’s enough here to mess around with beyond that to keep most newcomers and vets occupied. Aside from the aforementioned additional modes there’s also the option to hook up with players online for more strategic battling if that’s your calling, and weekly challenges to master, XP to gain as well. It has to be said, there are card packs to unlock from extensive play or pay real money for in the form of Blitz packs used in the Blitz mode which seems to be a big focus of the game. If you’re not into paying for extra content here then you’re going to be left with limited options compared to those who spend up to £75 on them or until you gain the points required by playing…a lot. Yikes! As with all extra content, it’s optional but still is a bitter pill to swallow for those on a budget or who simply don’t agree with paying for extras. 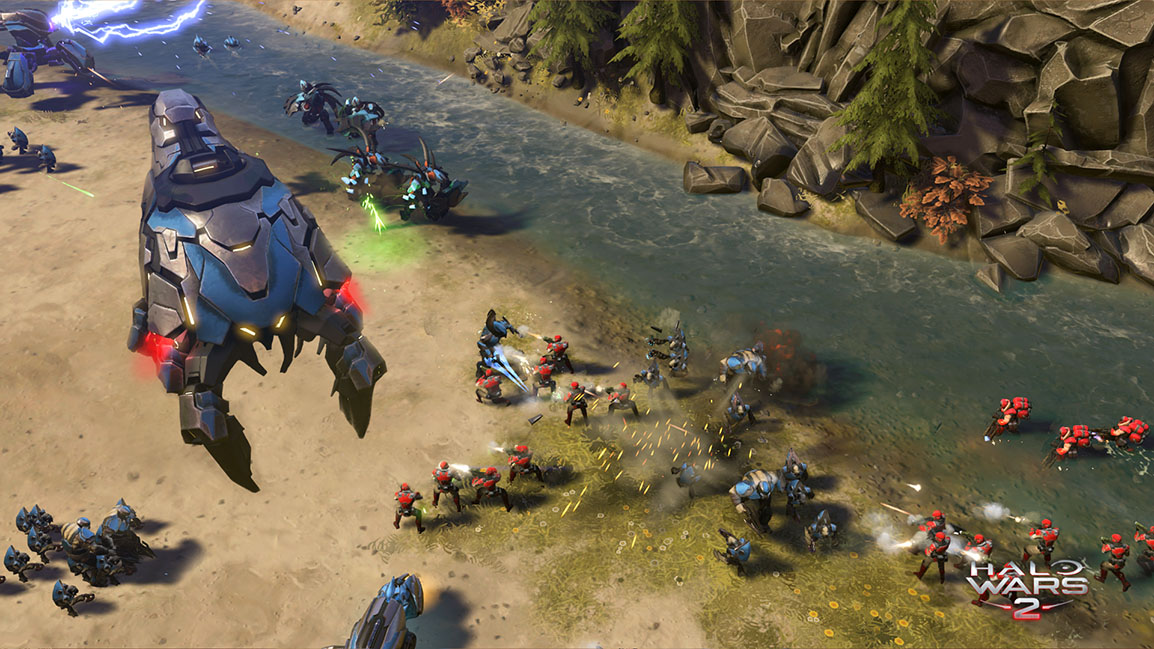 To conclude, Halo Wars 2 is a fine sequel and makes a good starting point for people looking to get a taste of the RTS genre with its easy pick up and play gameplay. Whilst some elements of balance could be better there enough meat here for experimental play and learning although some more mode variety could have worked wonders overall especially for those who have rinsed out the campaign, extra modes and multiplayer. Those players well versed in RTS games might come away feeling the overall game is limited and perhaps too tailored towards a console audience, but if you mess around with the options there’s ways to up the challenge somewhat to suit. Halo Wars 2 isn’t a game for trigger happy gamers looking for another slice of Halo FPS action, or RPG gamers after deep and rich characterization. It’s very much a hands-off type game. That said, if you’re looking to move out of your action, shooter or RPG comfort zone then this is worth checking out as a neat introduction to RTS gaming.