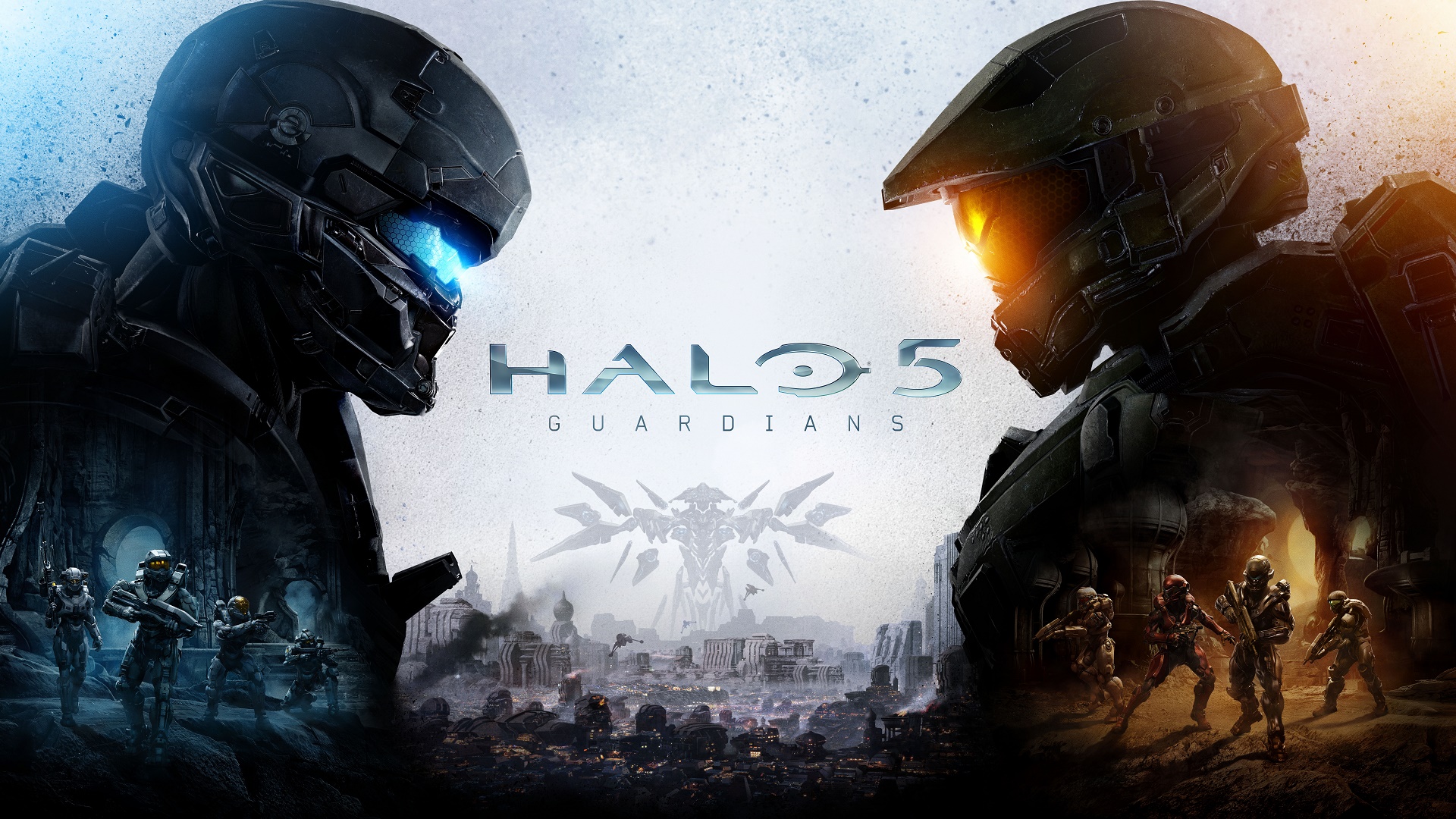 It has been 3 years since Halo 4 released on Xbox 360 and although since then we’ve had the rather cool Halo: The Master Chief Collection on Xbox One Halo 5: Guardians marks the first game in the long running series to appear on Microsoft’s current gen console. With a story introducing new character Sergeant Locke and his team Osiris who embark on a quest to track down the now rogue Master Chief character – the hero from the previous games – Halo 5 offers more of the first person shooting gamers are familiar with across an expansive story and online multiplayer modes. As a first entry on Xbox One, is this a must have game for the Halo fan and anyone jumping in to the universe for the first time. Take a look at our Halo 5: Guardian review for the full picture.

Halo 5: Guardians marks the first game in the franchise to be specifically developed for the Xbox One console and is 343 Industries chance to prove they have purposly continued the success from their predecessors Bungie beyond Halo 4 and the repackaged The Master Chief Collection they previously developed. As always, the game comes in two parts with a single player or four player co-op story campaign plighting the existence of Sergeant Locke and his Osiris squad over several missions with a few additional Master Chief and his Blue team sections for good measure. It’s not an even split with Locke’s missions making up the bulk of the campaign but it’s nice to be able to play both sides although in reality they play very much the same. Locke and Osiris are out to bring back the now rogue Master Chief character who has his own agenda of reaching the AI construct Cortana who in the last game seemed more like a love interest for the character. 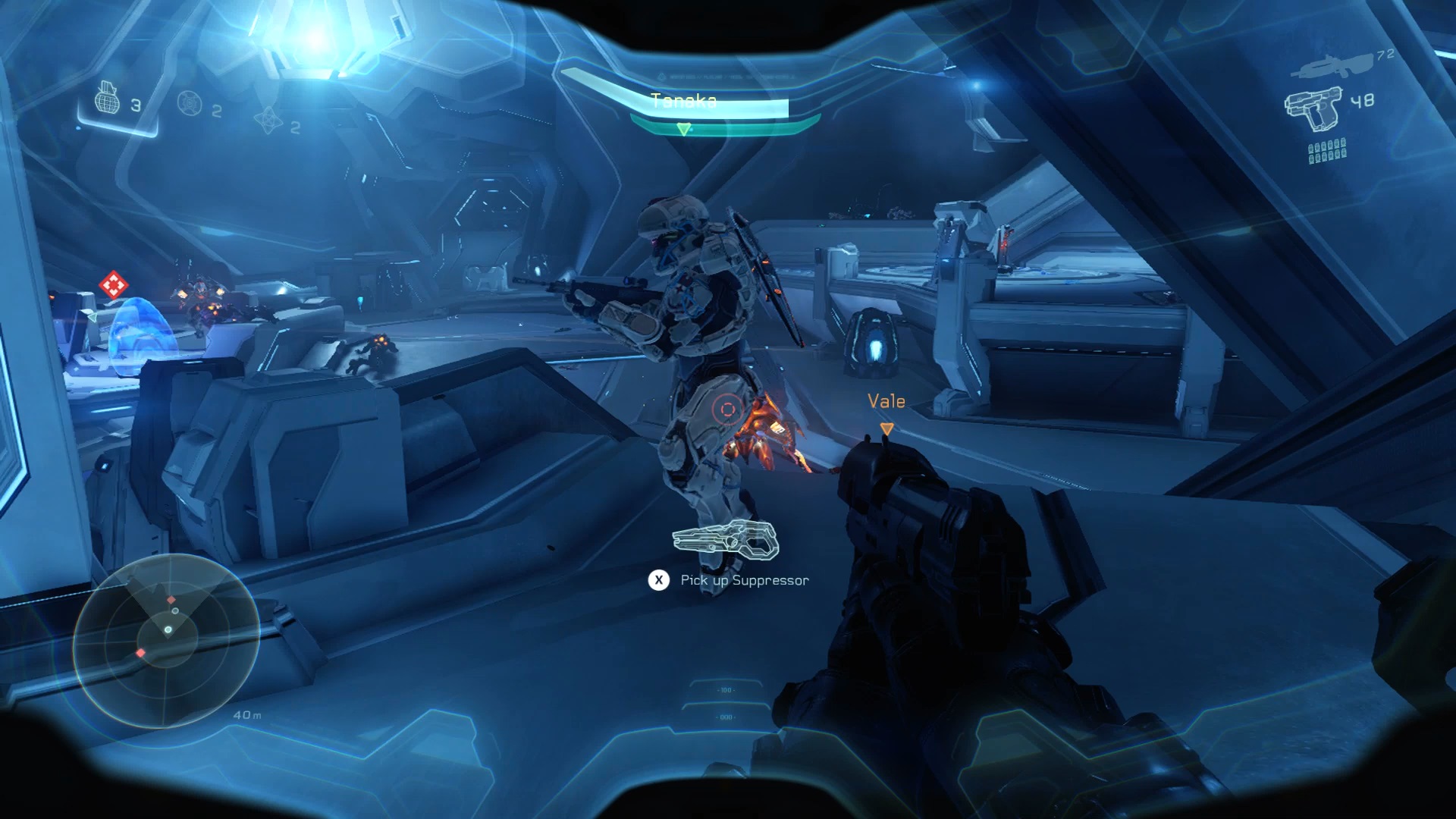 Plot aside and there’s some solid and well-established gunplay on offer against the usual AI suspects we’ve seen in previous games which offer nothing major in the way of new and adapting gameplay, in fact many moments feel very similar to those seen in Halo 4. The only major changes here aside from a few combat moves such as ground pounding and dodging is iron sights aiming and the option to order team mates to pick up select weapons and hold an area or target specific enemies. In fact, on Normal default difficulty it’s quite possible to play entire missions without firing a single shot if that’s your calling. However, it’s not all smelling of roses as the friendly AI does mess up on occasion and will sometimes ignore your pleas for help when downed or simply fail to shoot the enemy until you’re in close proximity. That said, it’s a simplified system of offering team work in the absence of three other human players which if you’re connected online should be easy to set up with friends – although there’s no matchmaking here for those who want a bit of randomized play. Another new element for the campaign are several areas where players take on a role playing guise being tasked with wandering around non conflict zones and interacting with NPCs, these feel somewhat tacked on as filler content which might help tell the story more but are a bit of a distraction for those who just want to jump into a vehicle and start tearing up the place.

343 continues to provide a pleasant looking game with excellent art direction, expansive locales and some great sci-fi visuals overall. What’s perhaps the best part of the visual splendour on offer is the fairly consistent 60 frames per second which makes the gameplay feel much smoother and reactive. Sadly there does seem to be some oddities with the animations of the enemies though especially when killed making for some jagged deaths which don’t quite look right or feel as smooth as the rest of the game. It’s a minor niggle but worth mentioning all the same as it stands out amongst the polish quite a bit.

Audio comes in with a subdued but compelling sound track purporting familiar themes and sitting just right at the cusp of intrigue and action and can’t be faulted at all with its high production values being evident at all times. The same can be said for a well performed script and sound effects which perhaps is expected from such an established franchise. 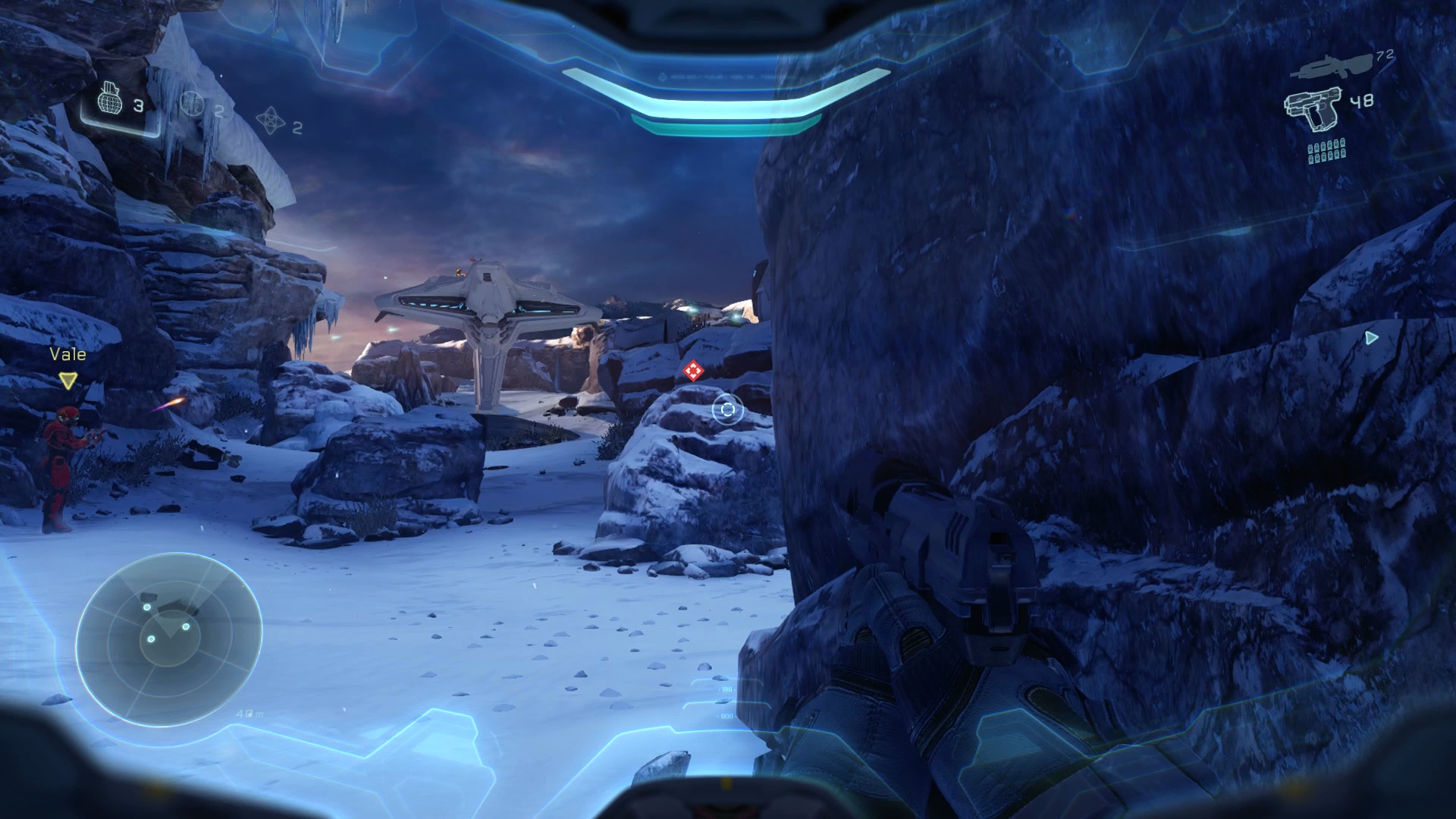 In terms of length the story campaign spans across 15 missions but on default setting can be completed in an afternoon’s play. Seasoned Halo fans are well advised to up the difficulty to Heroic for the real deal, but even this means competent players will be able to beat the game pretty fast. To flesh things out there are Intel items to hunt down and of course skull modifiers to find and then use on subsequent plays – and being honest there are several great moments worth jumping into again and again. Sadly the scoring has been ditched but this is probably due to limited appeal, even so the removal of options isn’t great and this also extends to split-screen local play which is unashamedly absent for the first time.

The other half of Halo 5’s main game is the multiplayer which brings back favourite versus solo game modes such as Slayer and ups the ante with the team modes with the arrival of Warzone amongst others. Warzone offers a competitive flavour against opposing human players across open maps which this time have capture objectives but also AI enemies to take down for bonuses. It’s a neat revision on old multiplayer tropes and does well to inject some life into the game. There’s also plenty more customization options now with the inclusion of requisitions offering gamers more choices in how they load out their very own Spartan warrior. It’s an accomplished set of variables as ever and offers many more hours of playtime for beyond the story campaign. Sadly there are no bots to practice with which means learning the ropes if you’re a beginner can be quite the task, but due to the fairly accessible pacing means newcomers should find their strides pretty easily. 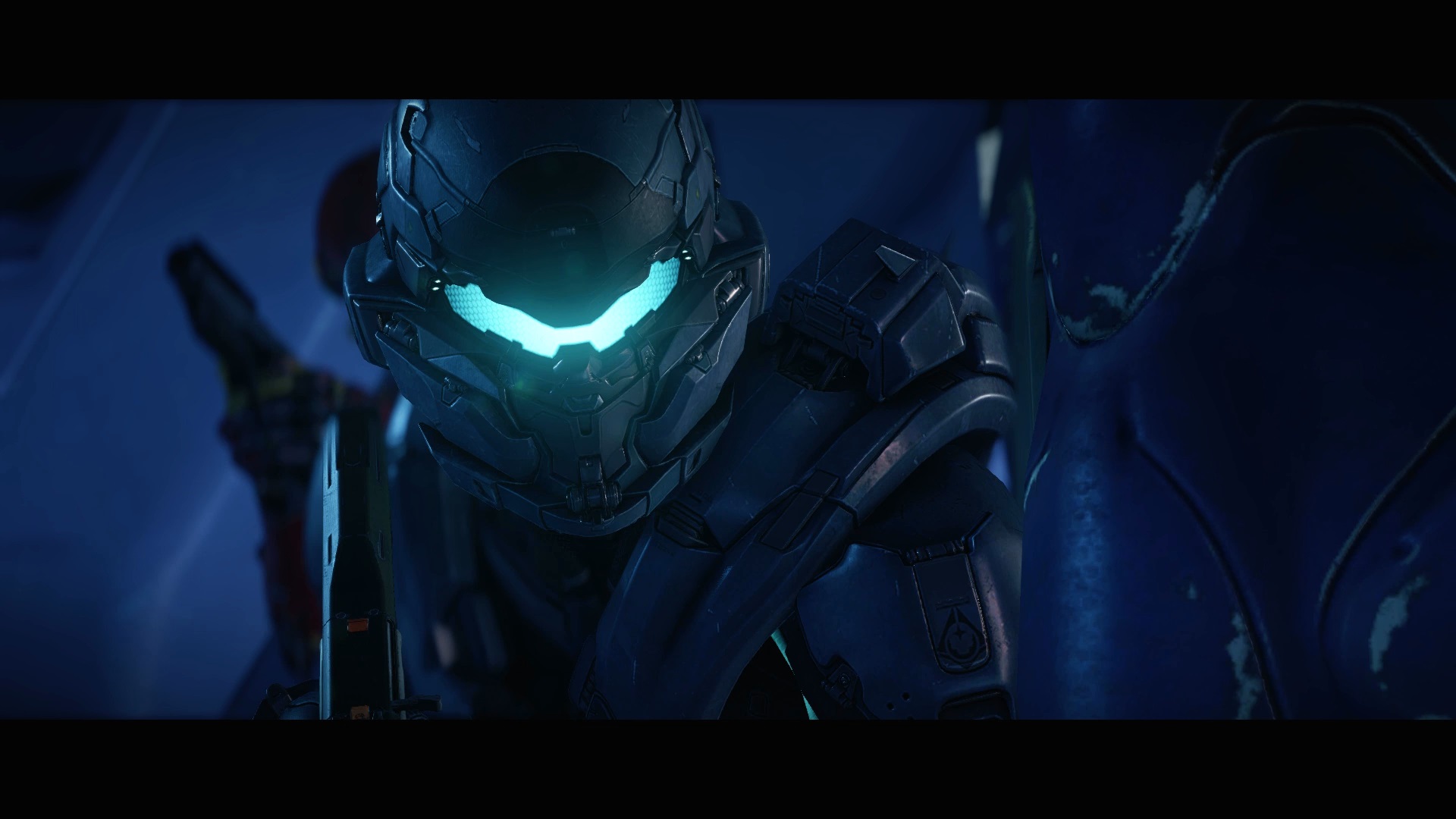 Halo 5: Guardians enters the fray ticking all the right boxes but never seems to really go much further than what’s expected of it. The story whilst engaging doesn’t feel as grand as it could have been where many of its greatest moments are told via cutscenes. The battle between Locke and Master chief which could have been more menacing has perhaps been overplayed a little in the marketing of the game via its trailers as the end result feels nothing like what has been presented. However, on its own merits it’s still an entertaining ride albeit short and predictable as ever. For fans of the series Halo 5 is an accomplished and safe investment and for anyone new should be able to jump in and have an enjoyable ride even if some of the lore is a little vague. Multiplayer as expected is strong and adds the longevity the game needs but in all if you’re looking for some fresh legs for the franchise then you won’t really find it here. Halo 5 is a very good game but sadly just falls short of greatness perhaps due to an overall feeling of familiarity and playing it safe. If you like sci-fi shooters then this is well worth a look as technically it delivers an accomplished shooter that’s fun and easy to pick up and play.