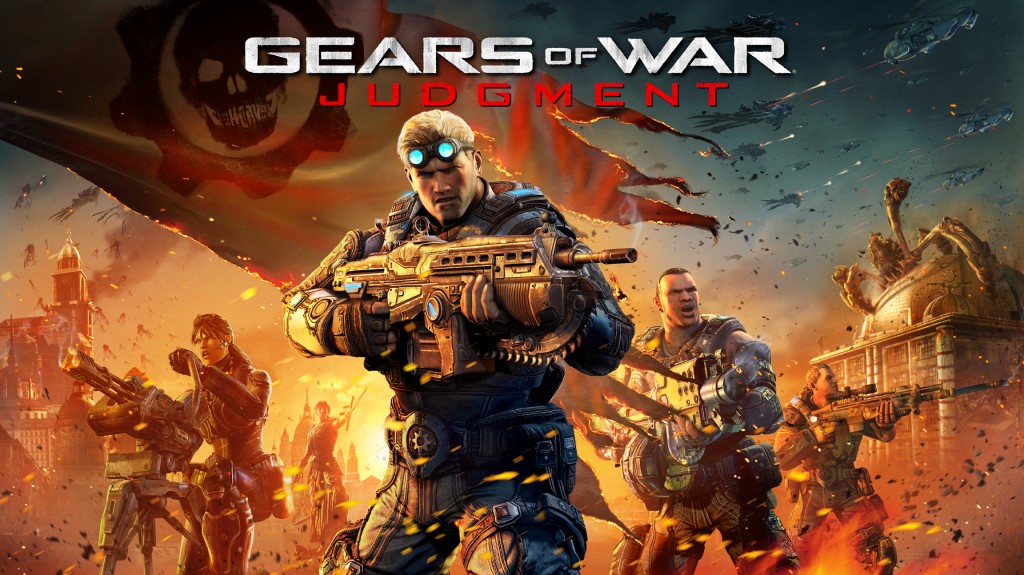 Today we’re taking a look at the latest Gears of War Judgment Call to Arms DLC in our video review.

Gears of War: Judgment’s first premium map pack has emerged, and while we’re only several weeks after the game’s launch, many of us playing competitively have likely grown tired of the handful of launch maps for versus play – though we have had Haven – a free map sponsored by Maxim to ease our pain and suffering, as well as the return of the classic Execution mode.

The Call to Arms add-on is the first premium map pack, and it’s available now to VIP Season Pass holders, or a week later via. the Xbox Live Marketplace. Like the full game, given its hefty price-tag, even this add-on is a little light on new content.

As a standalone purchase at 1000 Microsoft points, Call to Arms consists of a brand new FFA versus mode, two returning classic versus maps, and one new map for Judgment’s class-based OverRun and Survival modes, as well as unique character and weapon skins.

Master at Arms – If you thought Judgment took some inspiration from Call of Duty previously, then it’s done it again. Much like CoD’s Gun Game mode, Master at Arms sees you starting with a specific weapon, and on gaining a kill with this automatically spawns the next weapon in your hands. The goal is to be the first player to score a kill with all 20 of the game’s weapons. It’s surprisingly more entertaining than it sounds, and forces all to get well accustomed with the game’s vast arsenal, as opposed to leaning on the Gnasher, which has long proven the weapon of choice.

Boneyard – otherwise known as Mausoleum, a classic map from the Gears original, and a map that’s not seen the light of day since. Whilst a remake with a new name, it’s also vastly more unique than its classic counterpart, and showcases how a classic map can be revitalised for a new game. Mausoleum was rather a restrictive map, with a bottleneck down the central bridge housing the Boomshot, though with Judgment’s more vertical approach, and being able to mantle over almost all cover, Boneyard is much less restrictive, and certainly much more broader in scope with additional locations and structures housing the power weapons.

Blood Drive – An iconic Gears classic, Blood Drive will offer some fond memories for many a Gears player, although its premium addition to Judgment comes as somewhat of a surprise. While the previously mentioned Boneyard has been altered, it’s also the first time Mausoleum has been brought back in a sequel (or prequel) – the same can not be said for Blood Drive however.

Blood Drive is clearly a fan favourite, though it has seen some alterations for Judgment besides some basic extensions, most noticeably the back of the spawn areas have been opened up giving players quick access to drop down on the rear of the map – catering all the more prominently to Free-for-All – as opposed to being forced to charging down the all too familiar steps.

Blood Drive’s first appearance came as a retail map on-disc in Gears of War 2, and then again in Gears of War 3 it made a return as part of a premium map pack, and now in Gears Judgment’s first premium map pack, it’s back again… something about that is just off, especially considering the rather inflated price point. It’s addition for a fee is illogical, all Gears of War games have some iconic maps that could be brought back without the need for a triple drip; if there was one map that could get away with it, then that would be the iconic Gridlock, though much like Mausoleum which has re-emerged in the form of Boneyard, there too are many other great classics that could fit the bill for Judgment – Rooftops, River and Sanctuary spring to mind, to name but a few.

Terminal – A single new addition to Judgment’s unique class-based modes in OverRun and Survival, and the one map in Call to Arms that can be considered as brand spanking new content. After some good time invested in both OverRun and Survival on this new map, it’s quickly become my favourite map, now whether like Versus this is due to a general lack of maps or not; either way, it’s certainly been entertaining, and while still very much class-based, the section where you have to hold down the arcade store and main stairs very much makes me reminisce of the classic Horde mode that Gears of War pioneered. While I am still left perplexed at the absence of Horde throughout Gears Judgment, needless to say, Terminal certainly provides similar thrills as the Locust come flooding in through so few directions.

Whilst skins may be rather insignificant, one stands out from the crowd – an all new Locust skin – clearly this is a response to the fans demanding the Locust’s return to multiplayer, though I doubt this is what many had in mind. Though hopefully this is not so much a joke or a solution, but an indication that the Locust are due for a comeback to versus; although it’s perhaps best to be less optimistic.

Naturally, there’s a DLC Playlist present so VIP and DLC owners can get stuck in on their new maps, though rather frustratingly the DLC Playlists do not restrict access to just DLC maps, but rather – all maps. Judgment’s multiplayer offerings, in comparison to past Gears releases, it’s clearly significantly lighter on content. This no doubt is the reasoning behind the DLC Playlist including both the original launch and DLC maps, even so, it makes for quite the frustrating experience as many have been playing on the same handful of maps since release.

It literally is quite the chore to have to work through the cycle to get to play on the new content – especially considering that the new achievements can only be acquired on specific maps. This is more so frustrating for OverRun, given that the match times are much lengthier, besides playing Private with friends, Public play forces you to plough through the existing 4 maps before getting to the single new map.

Besides some playlist grievances – which we expect can be easily adjusted, Call to Arms’ biggest fault is its pricing. Even with the COD-inspired Master at Arms mode present, 1000 Microsoft points for three maps, only one of which is brand new, is frankly absurd.

Bearing in mind that the VIP Pass, which is 1600 Microsoft points gets you Call to Arms, and another premium map pack upon release, as with all Season Passes, it’s clearly better value – though one could argue that the Season Pass is not so much a saving, but what the standalone pricing should otherwise have equated to anyway. Regardless, ultimately the VIP Pass gets you the best value, let’s just hope the next map pack; packs in even more fresh, new content, instead of focusing on regurgitating classic maps.

The Call to Arms map pack is not an easy recommendation, it’s clearly over-priced for the content included. That said, as part of the VIP Pass at 1600MSP, it becomes much more palatable, and certainly more in-line with the pricing that we have come to expect from such an add-on. If you’re looking to beef up your Judgment multiplayer experience, then investing in the VIP Pass looks to have you covered right now, and for a second premium map pack in the near future.