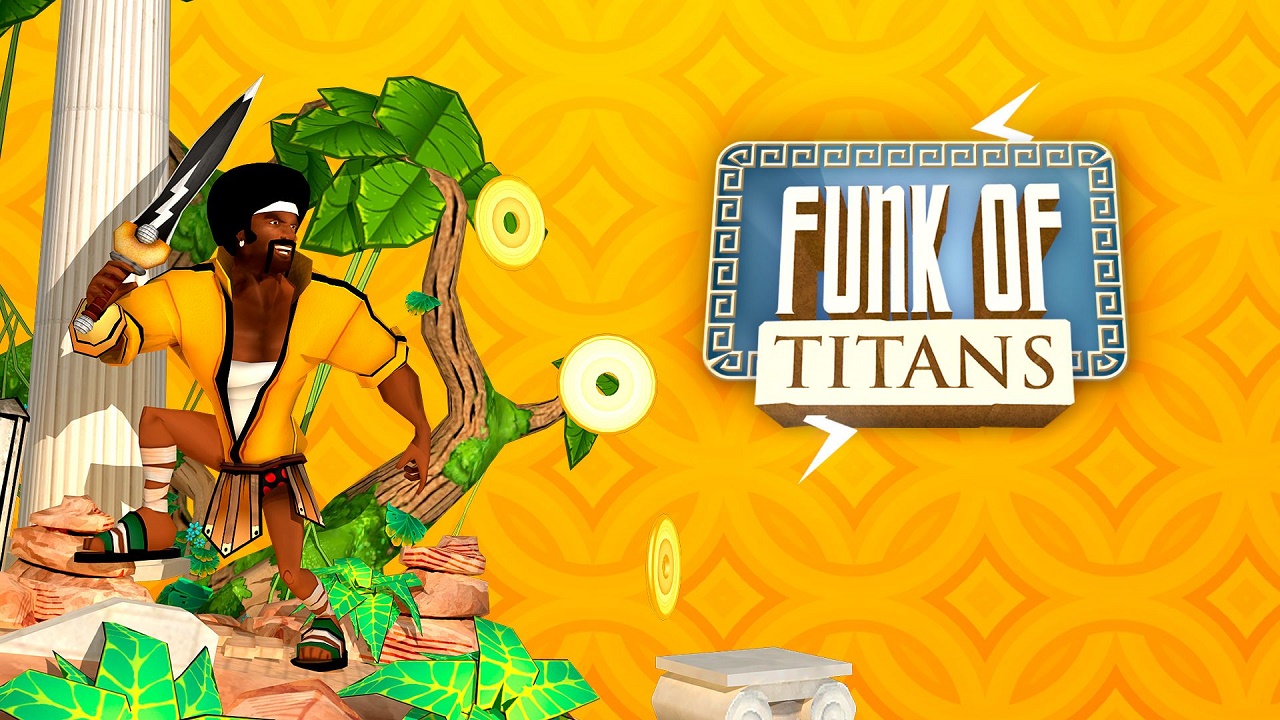 We take a look at this ID@Xbox game that has funk-ed its way exclusively onto Xbox One – from A Crowd of Monsters – comes Funk of the Titans. The game’s essentially an on-rails platformer with its story combining both (extremely loosely I might add) Greek mythology and musical themes all rolled up into a rather bizarre adventure. You fill the boots of the cool afro-wielding Perseus whom with the blessing of his almighty big-daddy Zeus must travel through three worlds and spread the vibe of Funk; the end objective being to defeat the Pop, Rap and Rock titans at the end of each respective world – and there’s plenty of distractions along the way.

The game’s main hub is the level select map where you progress through levels and can talk to Zeus and keep track of his optional objectives that level up Perseus. The heroically-tubby Hercules and extremely keen love-interest Aretha are also available for a good old’ natter throughout, all the while gaining some bonus coin in the process.

As you gain coins and acquire new new weapons, and less vitally new masks from the store, there’s incentive to revisit stages with different weapons which are required to obtain sealed off collectible Idols – rather disappointingly though there’s not much in the way of flashy moves, though running around as Darth Vader with light-sabre or Jason Voorhees with machete (take your pick) will undoubtedly bring out your inner nerd. 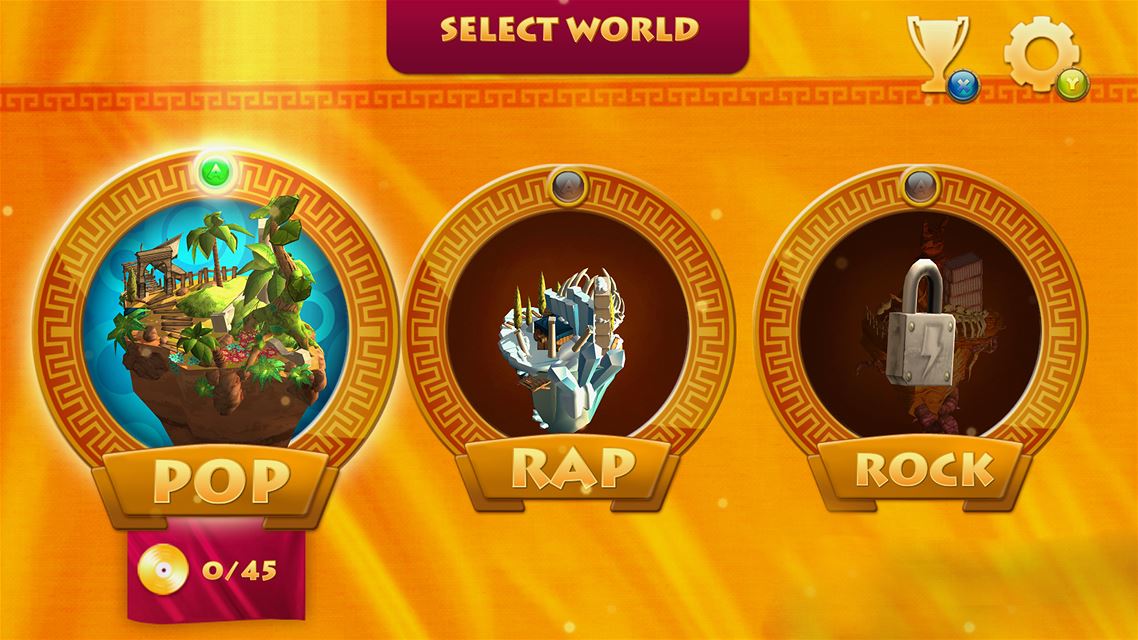 The core gameplay experience is broken up into three chunks; first and foremost Funk of Titans is primarily an on-rails side-scroller. Though initially peculiar, it feels very much like a port of a tablet/mobile game – with your character constantly charging forwards you are left with just the A button for jumping and X to attack, with some optional wise-cracking dialogue via. the left stick.

There’s three stationary enemy types holding their ground and occasionally they require you to think quick on your feet, one of which can be jumped onto to gain extra height for coins or a collectibles hidden location – an Idol, while the remaining two types have either a spike helmet or shield requiring a more delicately timed leap or attack. While the mechanics are literally as simplistic as described, there is some small and welcome degree of challenge presented as Perseus can only take two hits before restarting the level is required; the first hit knocks his clothes off (don’t ask), and the second hit deals the killing blow. The stages are relatively short averaging about 1-minute thus encouraging a quick restart if preferred.

Progressing through these into later levels introduces some intricacy into the gameplay with switches and grab rails which typically can head into a misleading path and not always in the direction of the perfect clean sweep. Though entertaining, the gameplay is certainly repetitive, and in a further attempt to spice up Funk’s offerings the constant running and jumping is broken up with a rather amusing, but soon to be irritating Pegasus bonus levels. This is forced upon the player as a reward at the end of each stage provided you have obtained the hidden Idol collectible. There is no choice, you can not go immediately back to the level select map – you must start the bonus mission (quitting and and/or committing suicide are otherwise valid options).

It’s quite amusing to begin with and all good humour as you press and hold the A button to gain height and let it go to fall further, all the while collecting coins and avoiding obstacles at an increasing speed. Sadly it soon grows far more tedious than the main bulk of the game for the simple fact you have to initiate the bonus mission whether you want to or not.

Grunts and Titans – these few encounters are more interesting and in-line with Funk of Titan’s basic gameplay premise in always requiring a speedy input at the right moment, as such these QTE battles match up remarkably well with the theme, all the while still providing something fresh. Each of the three worlds will have you do battle against a Grunt and Titan wedged in-between all the side-scrolling adventuring. First up is the Grunts, which are literally a brawl where you press the on-screen button prompts in-time to trigger Perseus unleashing his inner Funk-Fu and annihilating his opposition, then it’s back to business as usual. To close out each world Perseus must face a Titan god in a dance-off QTE battle and score more successful moves than his rival to become the ultimate Funk on the dance floor. 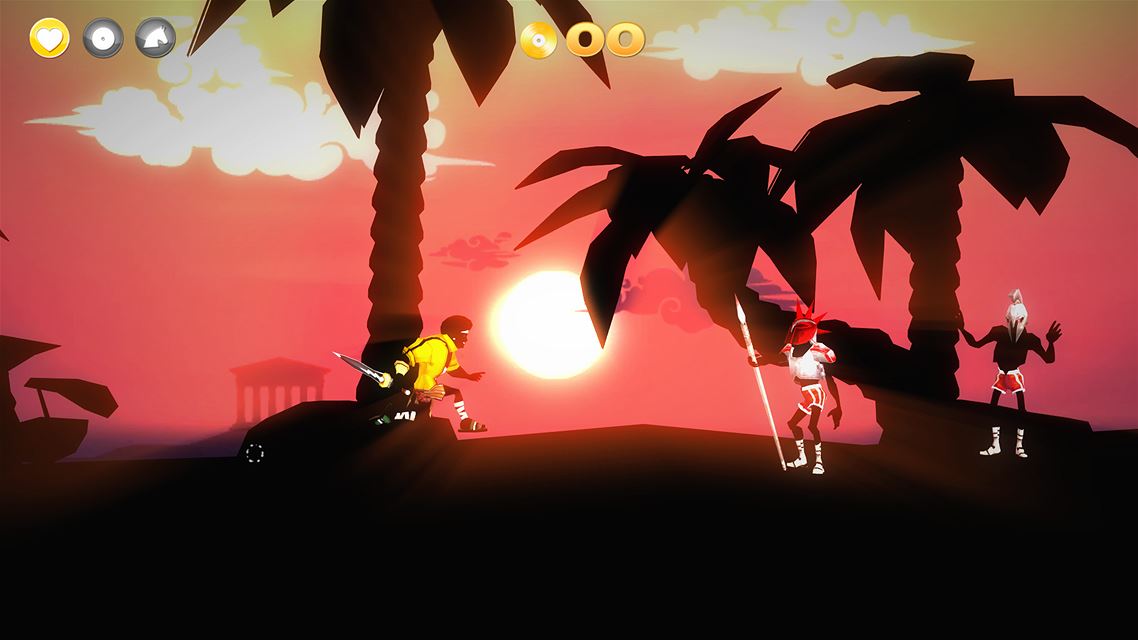 Whilst the traditional running and jumping stages are the most appealing aspects of the game, the QTE battles are very much a welcome reprieve. However, when unwanted, the same can not be said for the Pegasus bonus levels which serve more as a grating nuisance than a reward.The replay value is really on achieving a perfect run; collecting all the coins, capturing the collectible Idol and getting through without taking damage to bag all 3 medals per stage – which is certainly entertaining, if a little short lived.

Despite the game currently being Xbox One exclusive, the gameplay mechanics are certainly best suited to mobile devices although the price-point does not reflect this, it’s a bit expensive for what I imagine would be a much cheaper game on mobile. Funk of Titans is by no means too strenuous, and while there is some challenge presented, it’s all rather mild and quite addictive fun to simply jump in and out of in shorts bursts if you’re looking to kill a few minutes and minions along the way.