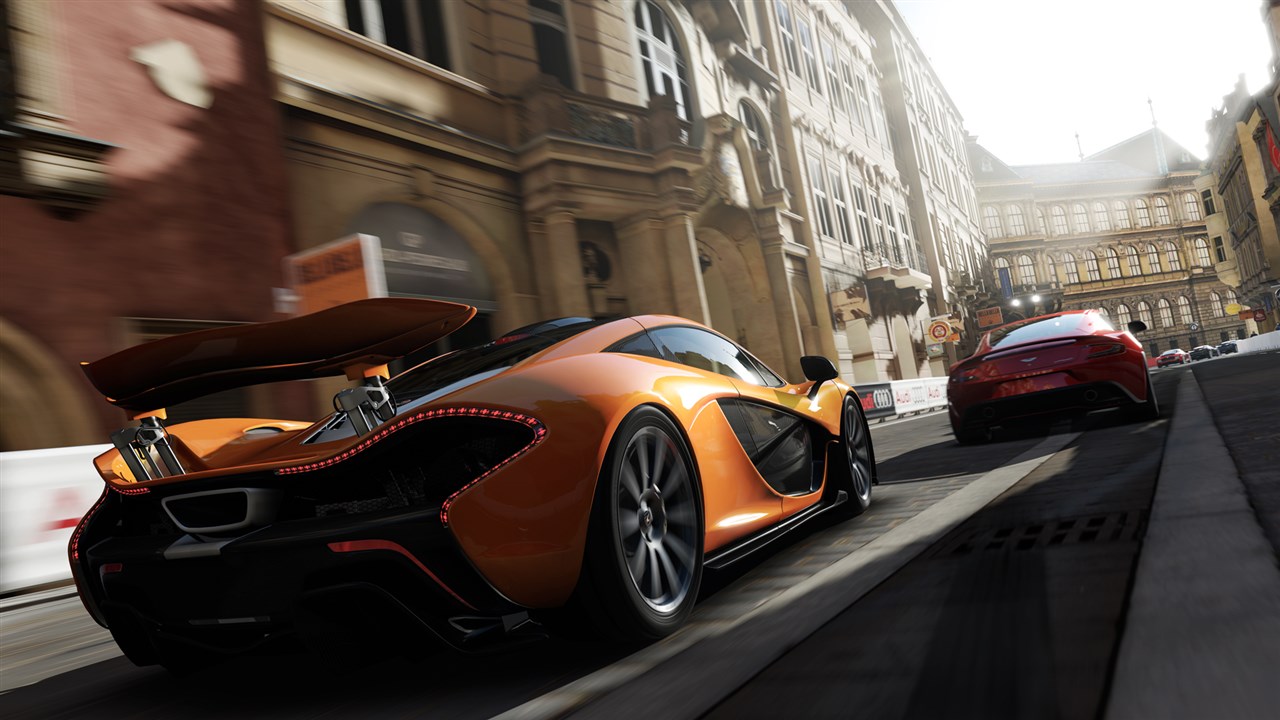 Turn 10’s racing game makes the jump to Xbox One as a launch title offering more of the same racing hi-jinx as its predecessors. However, there’s more under the bonnet this time which translates to a more furious game. is it worth the upgrade though? Take a look at our Forza Motorsport 5 video review for the full low-down.

Today we’re taking a look at Turn 10’s Xbox One exclusive racing game Forza Motorsport 5 which  sits at the crest of a series that’s well cemented within the Xbox games library over the years.  Not including the rather cool spin-off Forza Horizon, the fact that this is game number 5 says a lot about the passion and longevity Turn 10 have with their simulation racing game.

To begin, the front end retains its flashy visuals and introductory sequences, to the point of almost being of showroom quality. With its narrated intros, and easy navigation, there’s familiarity reborn under a slightly different guise compared to its predecessors. From the offset, players can jump into quick races with rented cars, or partake in the extensive career mode to make a heady start with what can only be described as a really long haul. Forget unlocking everything in the game in a few hours, and be prepared to race until your thumbs and fingers need to be prised away from the controller using a pair of plyiers and a crowbar.

Forza 5 retains the same formula it’s well known for where players select a specific event and then choose from a number of vehicles that are suited to that event only. These can range from mum and dad hatchbacks to dream-like super cars. What has to be noted here is the way the game’s progression is tailored to provide as much driving experience through various vehicle classes as possible. So, starting in the lower leagues and levelling up by winning races provides credits which can then be spent on more cars. Players have a choice of staying with the lower performance vehicles and hammering away at obtaining gold medals for each event to build up credits, or gradually work their way up to more powerful motors. It’s a decent system that rewards persistence through longevity more than anything. For the impatient, the choice of saving up the credits to snag that overly expensive Enzo Ferrari is an option, but does take time, and so the rental option in quick race is the best way to go here if you just want to experience the faster cars from the get go. You’ve really got to work at this game, and shouldn’t expect to have everything handed to you within a few hours play and rightly so considering how long it will be before we see the next Forza game. There are micro-transactions available which can speed up the process somewhat for a monetary fee, but these are an optional extra that simply pander to those who don’t have the time to work their way up through the career at the pace dictated by the game. In many ways, the hardcore nature of time investment is a good one, and means that players can sink many hours into the game and still have lots to strive for, even months after the distant memory of the first race.

In terms of the core driving gameplay, the game feels as slick as its predecessors which were already of a high quality representing the physics and traction of the vehicles. Unless you’re a real gear head, it’s unlikely you’ll see or feel much differences. However, the racing has been given a massive injection of uncertainty and realism in the sense that when connected online, players race against the ghosts – or Drivatars – of other players. This in itself creates a double edged sword in terms of enjoyment. On one hand, the thrill and exhilarating moments of having unpredictable opposition feels fresh and wonderfully balanced,  and has to be commended for bringing something new for the series. On the other hand, something is lost when racing in a more serious manner as other cars deliberately ram into you, or nudge you off the track at crucial moments.

That said, the drive is highly entertaining, and retains the same customization options seen in previous games. Hardcore racers can still manually shift gears, and those experimenting can use rewind when things don’t go according to plan, turn off things like the racing line , ABS, TCS and assisted steering. There’s something here for every skill level, and what’s startling is how these affect the drive and ultimately the race.

As another layer of interaction with the wider field, players can race against friend’s drivatars and those of similar skill, and are constantly pushed to beat their times. After each race there’s an option to jump into a timed run with the chance to continually move up the ranks minus the other 15 cars that normally hamper any speedier runs. This constant connected approach works well here and when playing offline, makes the game feel a little bit devoid of character.

What’s interesting to note is the influence of the original Xbox racer Project Gotham Racing, where some of the development team who worked on Forza Horizon have most likely put their input into the game, namely with the inclusion of the BBC’s Top Gear challenges. These break up the standard racing and make for welcome elements to master as players drive through gates, overtake slower cars and smash bowling pins.

In terms of looks, the visual upgrade from Forza 4 is apparent and is noticeable not only with the slick and almost sexual renditions of the vehicles, but the track side details have been given more prominence. There’s an overall sharper look to the game that serves it well, and the impressive framerate which never falters keeps the game running ultra smooth regardless of what’s happening on and off the track. Most notably the lighting is much improved with some impressive glare from the sun making one almost squint when looking directly into the sunshine on a mischievous bend or straight. The sensation of speed is also very good, maintaining a realistic pace, even at the upper levels of intense speed.

The audio retains its high quality with the Top Gear team adding their two cents before each event, and a pleasant sounding narrator for everything else. The cars and ambient sound effects are excellent and are only marred by the menu and in-game music which luckily can be switched decidedly OFF in the options if desired.

Forza 5 is a long game, made so by way of its design, which might annoy those who want it all right away. There’s days,  weeks  and months worth of racing for those who have to get every vehicle, and just enough leeway for those who save up for that one desirable car. The online element is well featured here with its constant challenges in the single player game, and for those brave enough to head out to the online multiplayer will find plenty to mess around with there as well. The only limitation here and when compared to open nature of Forza Horizon, are the number of available tracks which are repeats from the past games and could have offered more diversity. There isn’t the transitional day and night as seen in Forza Horizon or things like dynamic weather, and whilst not necessarily expected, could have made for a more encompassing game beyond what it already achieves rather well.

To conclude, Forza Motorsport 5 is an excellent start for the Xbox One but perhaps plays it a bit safe in terms of branching out to other forms of racing – namely the lack of night racing and weather effects as seen in other games. As it stands though, it’s one hell of a piece of software that ticks all the right boxes  that will appeal to casual and hardcore gamers alike. It certainly has to be praised for its online interactive qualities which propel the game way beyond its predecessors and give it, and the genre some much needed personality without opting to go fully arcade. There’s great value for money with this game, and although at a glance the core racing is similar to what we’ve seen  before and there’s perhaps less content than its predecessor, it’s a grandiose showcase for the Xbox One and the abilities of Turn 10. If you like racing, sexy cars or just want to drive, then this is a must have game and a neat upgrade from the last gen game.