Far Cry Primal is the latest of many spin-offs to Ubisoft’s iconic first-person open-world series. Instead of the futuristic/retro tech of Far Cry: Blood Dragon, this latest entry dates all the way back to 10,000 BC. It’s a period that works well, naturally Primal takes the tried and tested Far Cry formula that works for the time-period, and moulds it into something rather exceptional. Gone are the guns, cars, gyrocopters and even online co-op gets the chop. Far Cry 4’s Kyrat map however is still very much present, though that too has seen some drastic changes. Unfortunately the locations are completely different from one another, though it could have made for an interesting link between the games besides the method of aiding speedier development.

Primal sees you fill the role of Takkar the Beast Master, whom can tame deadly beasts to act as his companions in the wild. Though like Far Cry 4’s elephants – it is possible to ride larger animals such as mammoths, bears and even sabre-tooth tigers, thus enabling you to cover ground much more quickly and fill the absence of vehicles. As the first Far Cry outing to completely abandon guns, the entire pacing of Primal is much slower. Despite the lack of fire-power there are several ways Primal addresses these issues that are fitting for the period. For one, there’s the trusted make-shift bow for ranged attacks, and clubs and spears for close-quarters melee strikes which can also be thrown or set on fire to keep dangerous beasts at bay. Takkar can also sound in his trusty owl to scout the area – from here you can tag enemies, signal your beastly companion to attack, the owl can even drop crafted fire, berserk or bee bombs on enemies, and also swoop down to attack an enemy before retreating. The owl is simply a feathery hooting drone. 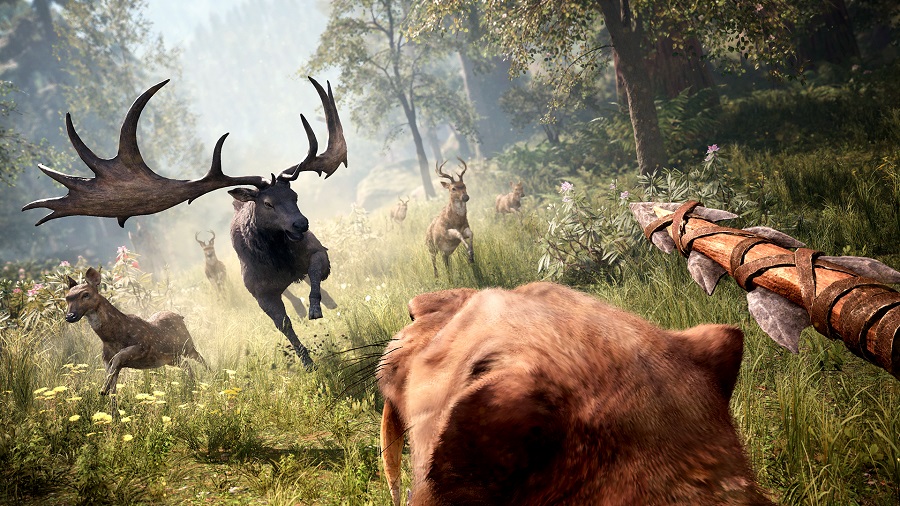 Takkar’s primary goal is to head out into the wild and bring back key characters who will provide further specific story missions. There’s also plenty of rather brief and tedious side-quests to further increase the Wenja village population in addition to unlocking skill-points for Takkar to gain more advanced abilities. These are very much akin to Far Cry 4’s unlocks, and if focusing on Primal’s story many of the better skills may not come until after completion. As a long-time Far Cry player it can be rather irritating not having the skill-set that you’re accustomed to – but mileage here will vary depending on whether you focus on the repetitive side-quests first to unlock abilities. 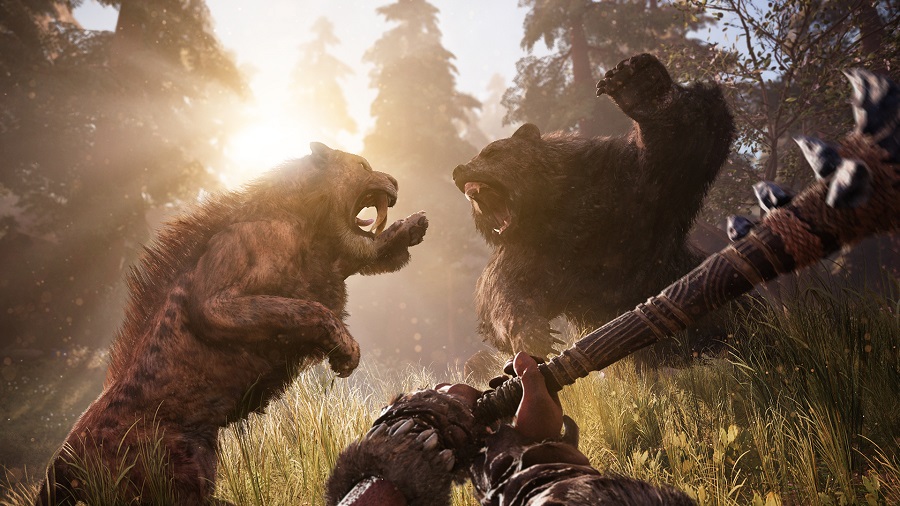 One of the biggest aspects to Far Cry in recent years has been great characters and Primal certainly has some wacky and fitting personalities, all with incredible attention to facial detail during cutscenes, and surprisingly believable banter with English subtitles to match. In particular it’s the villains that have proven to be a highlight of the series and it’s this key aspect that is rather disappointing in Far Cry Primal. While Ull and Batari do attempt to fill this void, it’s Ull that I would have liked to have seen more from as he has the sadistic presence that is reminiscent of bad-guy Vaas from Far Cry 3. Sadly this is not exploited to that same level and I feel Primal ultimately doesn’t make enough time for either villain to really shine through. However, in retrospect the beast missions do go a considerable way to fill the absence of such an anticipated villain. 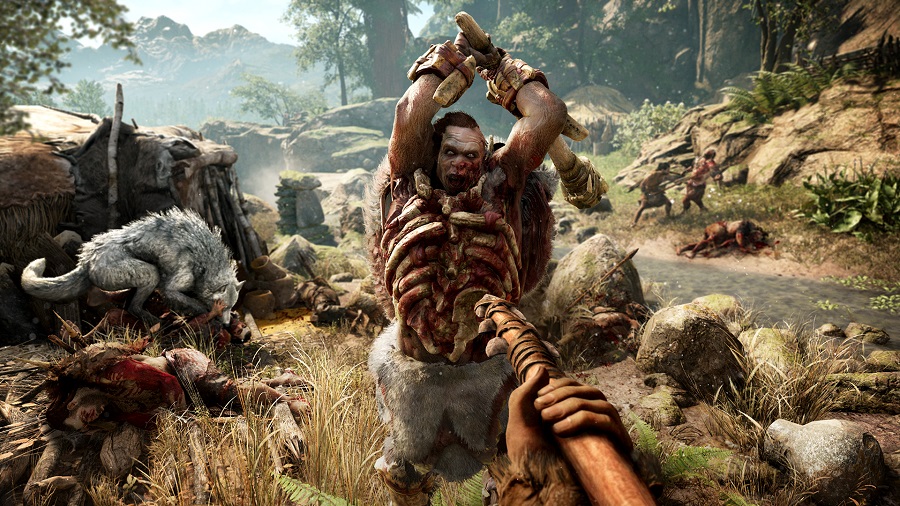 The beast tracking missions are by far the most intriguing and tense aspect in all of Far Cry Primal, and better still, they’re rather lengthy, gruelling encounters too. Moving from one area to the next looking for clues/footprints, chipping away at a great bear or mammoth’s health etc., before it retreats to the next area and you and your trusted furry companion pursue, battling anything else that gets in your way. It’s incredibly tense, yet conquering and taming the beast to add to your collection of companions is immensely gratifying.

It’s hard to be overly cynical with Far Cry Primal, as long-in-the-tooth as it may get in regards to repetition, it’s re-assuring that the game was lengthier than anticipated, and does fall in-line with its price-tag – which was an aspect I was initially concerned about with it being a spin-off. It also doesn’t hurt that the locale in the game, Oros, looks rather stunning too. Far Cry Primal is a real graphical showcase and performs exceptionally well, further highlighting just how far consoles have moved on from the previous generation. 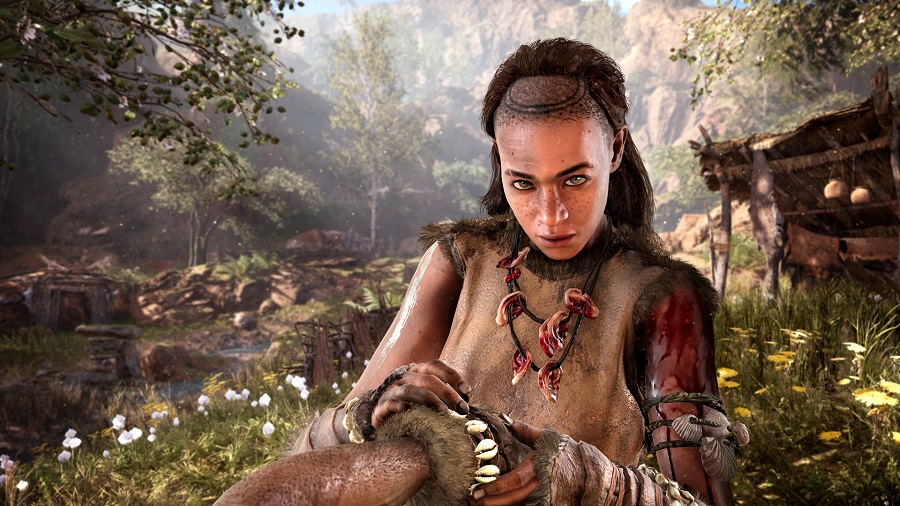 While falling a little short (by the rather high Far Cry standards) Primal still succeeds in taking the tried and tested gameplay mechanics and putting a huge emphasis on your beast companion, and doing so in a unique time-period not often explored in games. It really feels like a highly polished, modified Far Cry 4, which is no bad thing at all. If you’re after a break from the running and gunning and looking for something a little more mellow in comparison, then go right ahead and sink your teeth in.