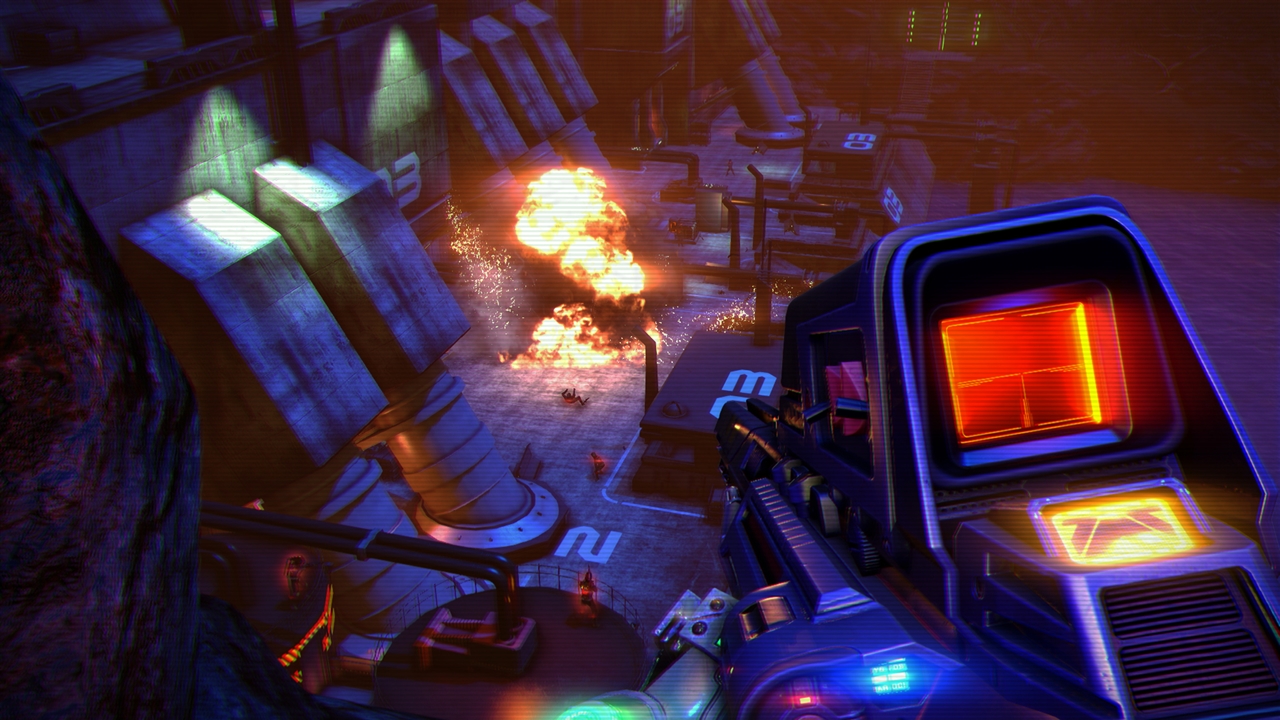 Today we’re taking a closer look at Far Cry 3 Blood Dragon from Ubisoft which hit the XBLA and PSN Steam networks today and is yours for around twelve quid.

Now we already previewed the game some weeks ago, but now having sunk more hours into the game and its crazy retro world and completed the campaign the verdict is here on whether Far Cry 3 Blood Dragon is worthy of your time or money.

The bottom line is, the story is fairly inconsequential as players assume the role of cyborg Rex who basically replaces Jason from the original game, although there’s no Vas to get in the way and instead the game’s story at least goes back to very basic principles of shooting first and not even bothering to ask questions later. This in itself works well, but does become a little repetitive, although thanks to the convoluted and awe inspiring 80s styled story and quips keeps players well on their toes. The combat feels very precise with its remastered weaponry and ultimately satisfying as players aim for headshots and special kills to earn experience points – the splattering of blue blood from headshots in particular is deliberately gratifying for all the right reasons.  In terms of the gags younger gamers might not get the complexities of them, but then again, they are not conducive to enjoying the game – although having a few laughs does make it all the more meaningful. Most gamers regardless of age will enjoy the simplicity of the approach of not taking itself too seriously and offering a more accessible jump in and out gaming experience compared to Far Cry 3. In a nutshell, as a fan of the original, it makes pleasant viewing just to see what Ubisoft has managed to conjure from its inner core into this seemingly different and highly stylized game.

At its heart, Blood Dragon pales in comparison to its father in terms of complexity, and yet many of the features remain intact. Players can still free roam, hunt and skin wild and reformed animals, capture optional outposts using either stealth or action approaches, execute side characters, collect hidden items and delve in a spot of hostage rescue. It’s all tied up rather neatly and in a way where players don’t have to think too much about what’s going on behind the scenes. For example, the skill system is automatic and simply provides particular skills as players level up. This is actually a good thing as it steers players away from spending too much time fiddling about with menus – although there are still plenty of those too.

Blood Dragon features a backwards step in terms of graphics, but in many ways the simple flat textures and neon lighting makes for a refreshing change from all the over exposed bright details of the original game. Sure, the post apocalyptic sky is either blood red or dark blue, but it all seems fitting and on occasion there are spots of the excellent lighting and shadow effects still being used.  Whilst the world does look samey, it is condensed enough to remain fresh and interesting as players venture between open land, sea and air to tight and brightly colored interior locales.

Audio is perhaps an acquired taste, even for older gamers as the electronic heavy soundtrack fits the mood of the 80s 90s period and creates some chilling and often fitting sounds. The actual sound bites from Rex and his compatriots are cheesy as can be and are well performed, but the comments from the grunts in their Cylon style voices (that’s the original Battlestar Galactica TV series for those who don’t know) are awesome as are the meaty sounding weapons.

On the downside, our game ended the campaign in just over four hours according to the game’s stats and this was after liberating all outposts and completing a few side missions as well. It’s not the longest piece of dowloadable content, but players can expect to sink some 5 – 7 hours if they want to get everything done.  Players cannot replay missions, but can mop up anything missed once the end credits roll, plus there’s the always available option to up the difficulty to prolong the experience or replay again.

Far Cry 3 Blood Dragon is an excellent reinvention of Far Cry 3 and for its brave move in creating a retro game, it succeeds on all levels and gets a positive thumbs up. At 12 bucks its a steal although could have been a little longer or had more stuff to do post game such as resetting outposts or doing something more with the wildlife. If you’re a fan of Far Cry 3, then this no nonsense package is well worth checking out to extend the life of the game. If you’re just after a crazy shooter and can’t be bothered with the original, then this standalone game should be right up your street.