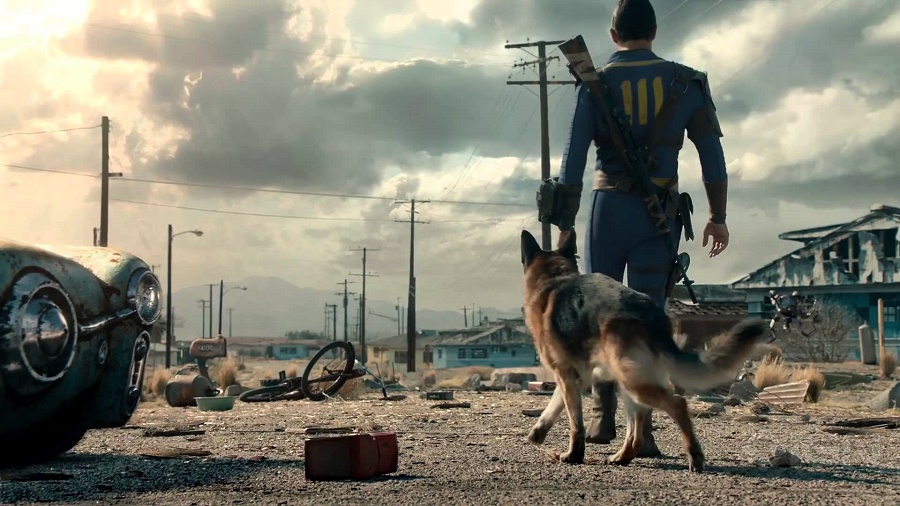 Bethesda recently released an update to their Fallout 4 VR which allows for the Oculus Rift with Touch controllers to be used making this another notch on their 2D games to VR transitions (what’s next, Dishonored?). Not that there should be any complaints about this because after the success of Skyrim VR, moving into a more modern post apocalyptic setting makes for a welcome change to all of the fantasy role playing stuff. We found Skyrim VR a magnificent game when a ton of mods were added and would say it was an essential purchase for any VR gamer despite the age of the base game. So, does Fallout 4 VR command the same accolade and considering the original released in 2015 the gap isn’t so great this time. 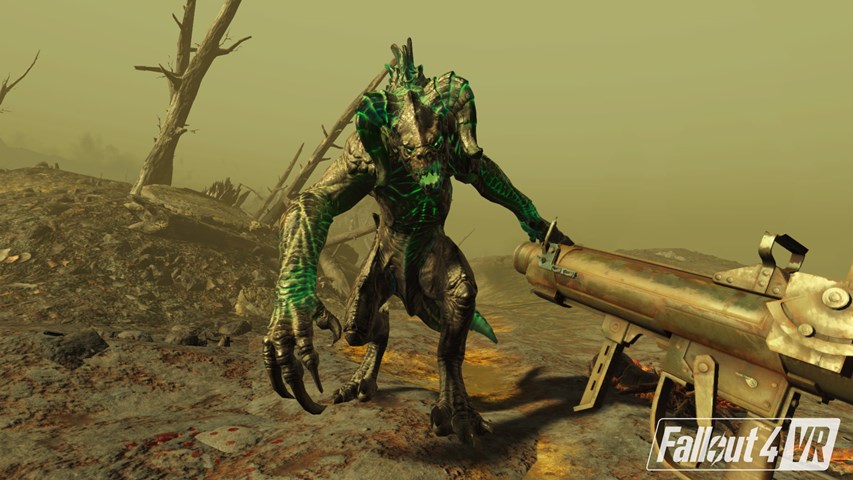 It’s likely most gamers will be familiar with the premise of Fallout 4, but for those who have been living under a rock it’s basically set in a future USA after a nuclear attack many years earlier. Thanks to cryogenic sleeping in an underground nuclear shelter, the lead character surfaces years later to find the world a very different place, except someone has killed his or her partner and kidnapped their son – that’s right you can play as either a male or female character. Upon starting the first person adventure, there is a lot of discovery on offer in the wastelands, with players able to choose their own path so to speak. What makes Fallout 4 such a joy to play is being able to build up communities of survivors with a set of handy customization tools at your disposal. Of course there is an underlying story to follow here revolving around the investigation of your lost son and finding your partner’s killers, but this can largely be ignored as other distractions come into play.

Fallout 4 VR brings the entire world into contrast as characters come to life and locations begin to show off their scale such is the beauty of the VR transition from the 2D plane. Although the world is barren and as suggested more tarnished than in Skyrim, it does hold its fair share of points of interest. Fallout 4 offers a far more detailed landscape which in itself translates well to VR as you move through broken and dilapidated ruins of former towns to makeshift houses and abandoned roads. There is simply a lot to take in making the landscape interesting to travel across. 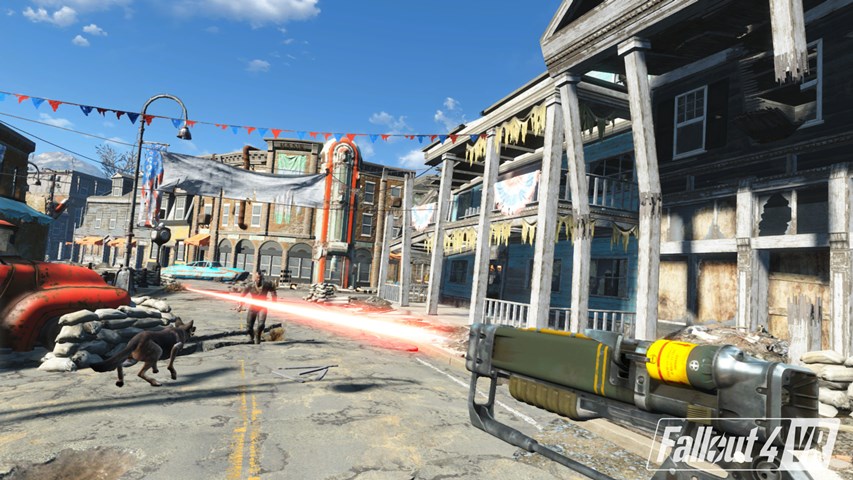 The characters you meet are much more interesting as well because of the idea that everyone is out for survival and your input into their plight can have a direct impact on what follows. As mentioned, a key part of the gameplay is being able to interact with pre-existing settlements or build your own in selected areas. Once this aspect is mastered it’s rather neat watching things grow as you spend time in the field gathering the required parts to build more stuff back at base. Once certain particulars are in place then people will come which is satisfying and made all the more engaging when you issue them specific duties around camp. The general interface works well here in VR allowing you to move items around before placing them, but it’s not quite perfect and sometimes you will have to move out of the place mode, shift position, then move back into place mode to get things right. 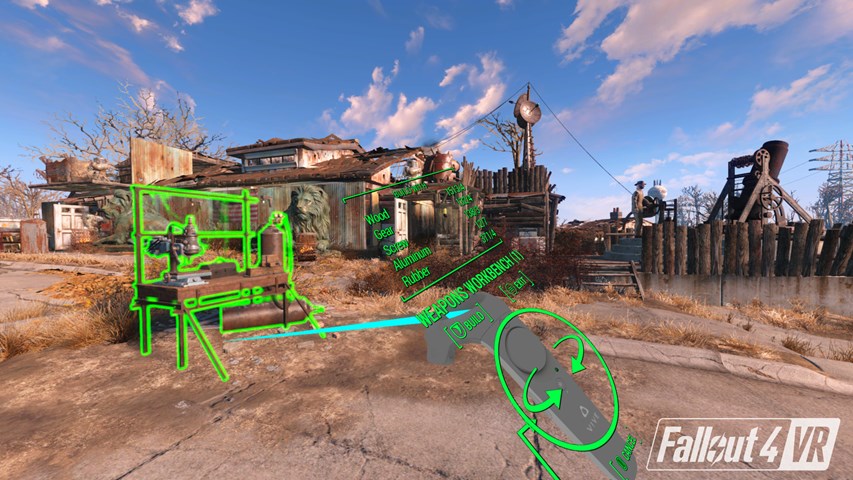 So let’s talk about the controls here because this is a big factor in owning this version which was previously limited to the Vive wands. Some serious tinkering was needed to get the game working with the Touch controllers but that has now been addressed. Using Touch and the controls now are very similar to Skyrim VR as you would expect (which means teleportation and free-movement options are available), but this time you have the pipboy – your gateway to all options and menus – resting on your wrist. As you play, you can raise your wrist closer to your eyes to navigate the menus. It’s a clever way of presenting menus without pulling you out of the experience but is not all rosy. Due to the rotation of your wrist the map in particular is quite hard to navigate, as is moving through all of the sub-sections. It’s all a bit fiddly and cumbersome which then requires a bit of patience. Once mastered though after some hours then pipboy actions become second nature, but still could be a little more user friendly or at least offer customization to suit player preferences. Combat is pretty easy with the choice of using real-time shooting or swipes with melee weapons against the more turn based VATS system. Unsurprisingly the shooting works really well and in VR you feel rightfully involved with every encounter whether that’s against man, robot or beast. 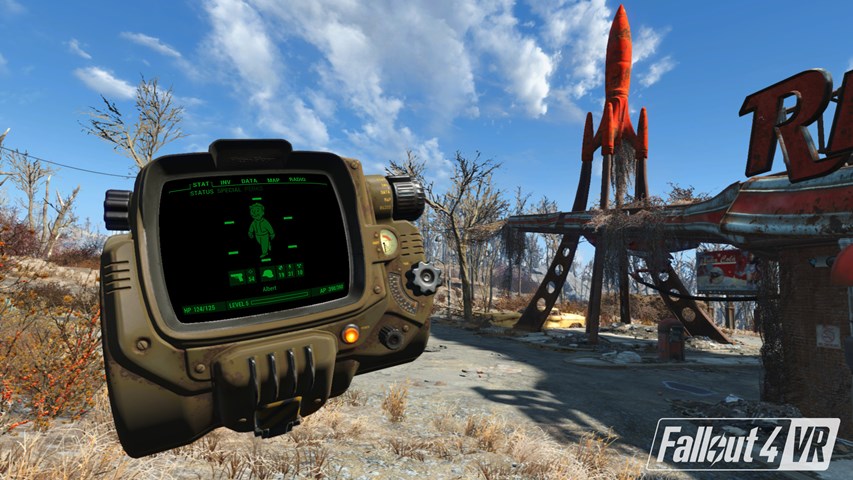 The world of Fallout 4 feels more detailed than Skyrim which means there is a lot to take in with various outdoor sections and gloomy interiors. In this regard there are expansive views and more enclosed items to look at. The more distant objects do suffer from overall loss of clarity which is a given due to the limitations of current VR headsets, but the reality is Fallout 4 looks better than Skyrim, even when using the basic vanilla version – perhaps this is obvious given the game’s age. naturally, those with more powerful systems can mess around with the super-sampling to make the image a little more sharper. Sadly though Fallout 4 VR in general isn’t as well optimized as its VR predecessor and suffers from fluctuating frame-rates. This can detract somewhat from the experience especially as there are times when the game feel like it should not dip frames in interior locales compared to more expansive sections outdoors. 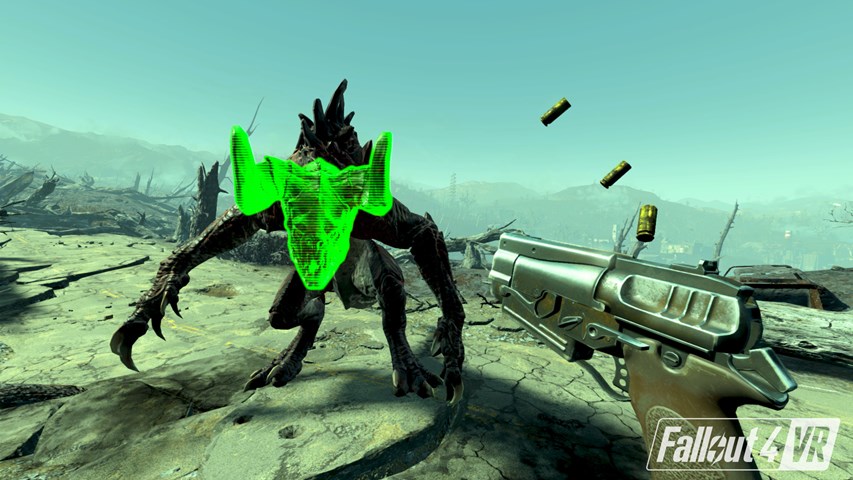 There is no denying that like Skyrim VR before it, Fallout 4 VR is a very much welcome addition to the VR roster of games that have come from 2D. Again, hats off to Bethesda as one of the few developers/publishers taking the time to make these conversions. It’s a big name franchise and therefore can only spell good things for VR adoption. That said, there are plus points and niggles here. Fallout 4 VR can be more readily played as a vanilla game although there are many mods available for those who would like to tinker with things to their heart’s content. Everything works as it should despite some obvious control scheme issues which rest on the side of fiddly. However, the game’s biggest challenge comes with the performance which can seriously hamper the experience at times to the point where only the determined will overlook these dips in frames with the knowledge that when it does work it’s a reasonably smooth ride. Those with less patience might begin to struggle a little – again this is subjective – depending on what spec PC is used, but even with a top end rig there are still moments of lower than expected frame rates. All things said and done though, Fallout 4 VR enters the fray as a commendable accompaniment to Skyrim VR and is certainly worth a punt considering the many hours of playtime one can have here. Whilst not as smooth as Skyrim, or as essential it comes recommended for those who want a little more meat on their VR experience of which Fallout 4 VR offers in spades.