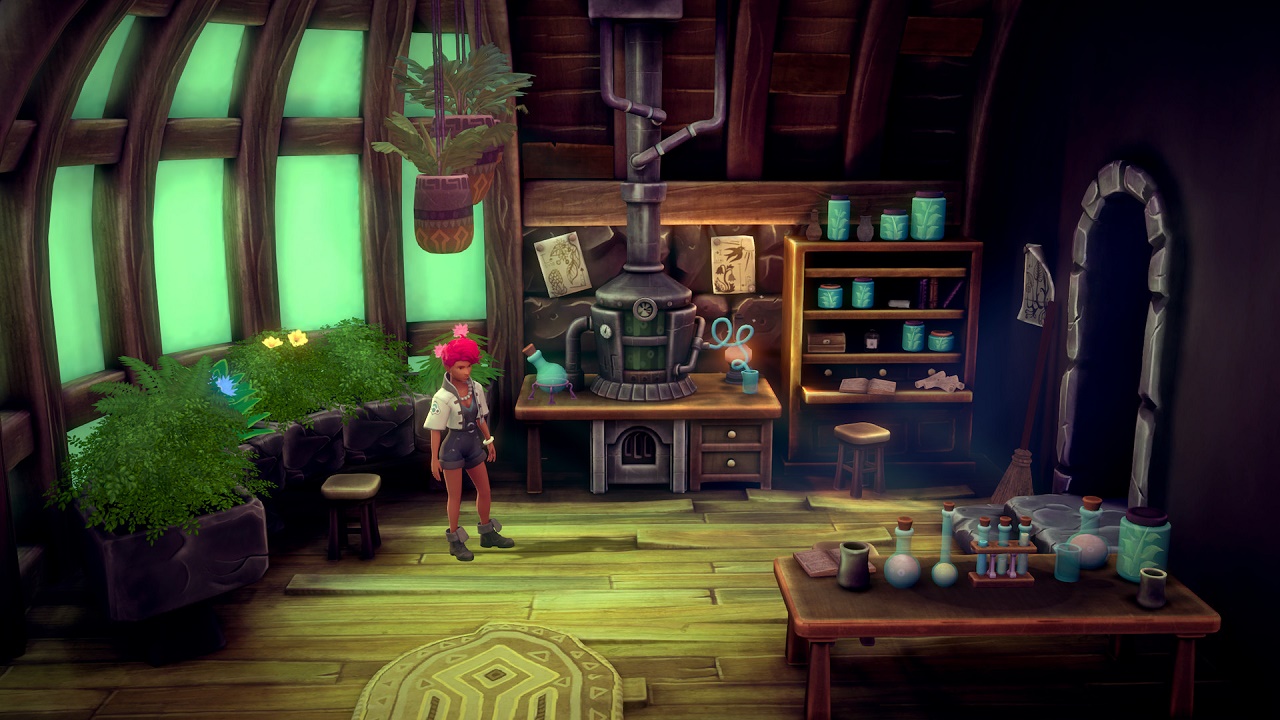 If you’re like me and you grew up playing classic RPGs like Breath of Fire, Chrono Trigger, and Final Fantasy IV and VI (originally, as most people know now, titled II and III in the west), then Earthlock: Festival of Magic will probably catch your attention as soon as you see its art style and discover that it’s a turn-based RPG. Yes, in many ways Earthlock is a call back to classic RPGs of yesteryear, built to delight those of us who may have drifted away from what passes for an RPG in recent times. If you’re happy to read that Earthlock doesn’t feature a single character clad primarily in buckles and leather straps, then read on – this may just be the game for you. 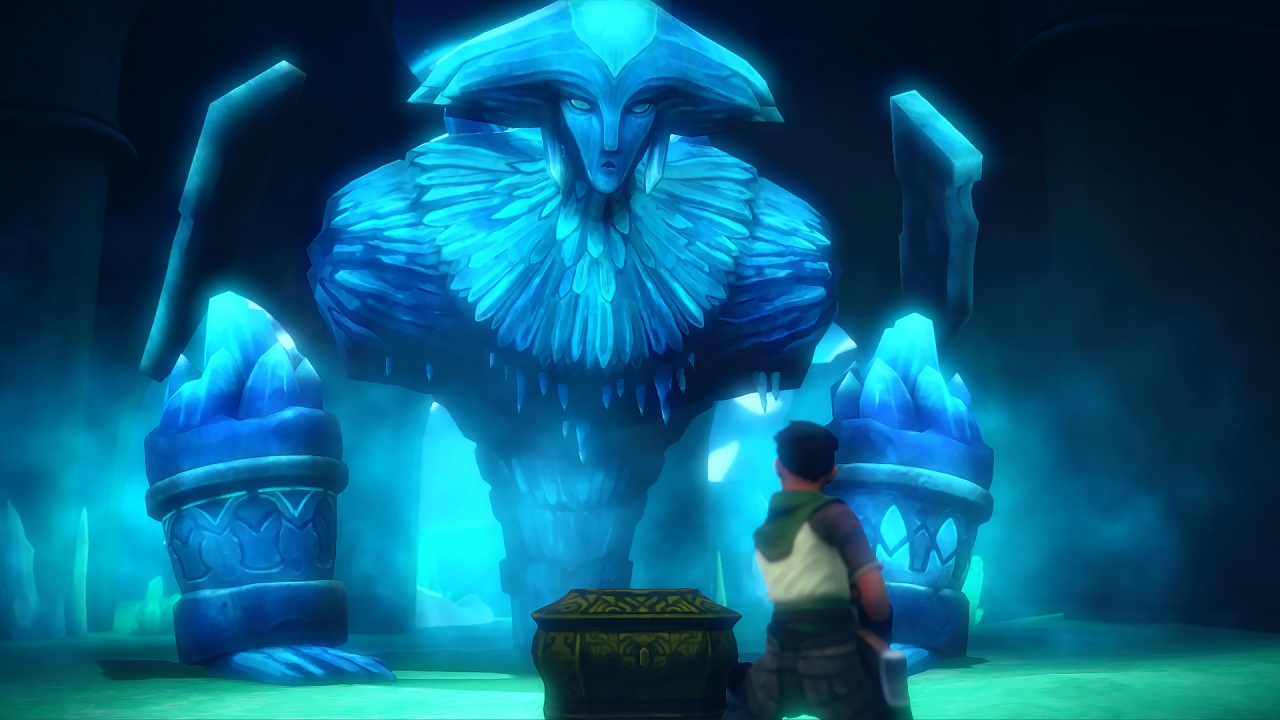 After a quick explanation of the universe in which the story takes place, Earthlock opens with a few bits of dialogue and a tutorial battle. Wasting little time, you go from one protagonist to the next as the story proper settles into its reading chair and prepares to guide you along your journey. You play primarily as Amon, a scavenger/treasure hunter/possible scoundrel who is trying to make his way in the world with his presumably adoptive uncle, since I can’t imagine the family tree that would exist between these two if they’re related by blood. His uncle Benjo is an anthropomorphic hammerhead shark, you see, and Amon is, you know, a human. This is a great example of the diversity of races and characters that exist in Earthlock, though. In fact, one of your companions you soon meet after beginning your adventure is a “hogbunny” named Gnart, an adorable magic user who resembles a pug-nosed moogle in a dapper little suit. Earthlock is certainly not lacking in design and style. 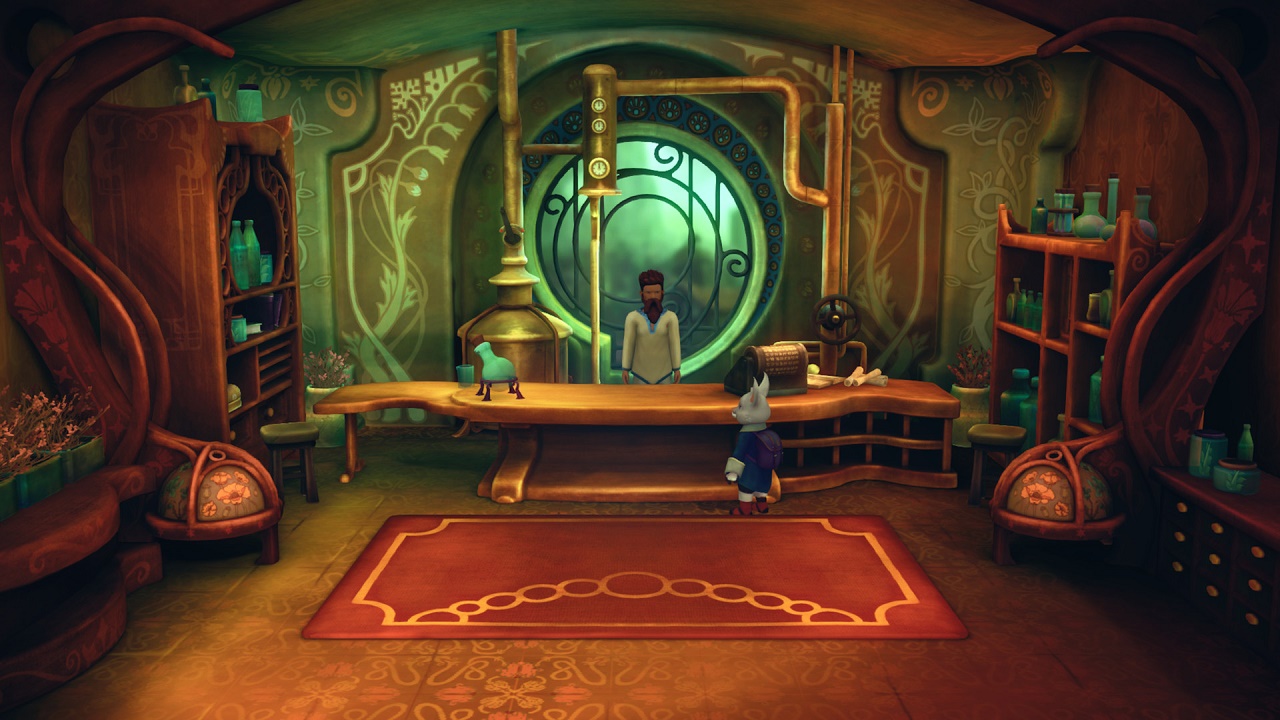 Each character and the backgrounds they traverse are rather beautifully drawn, using a soft color palette that reminds me of watercolor tones. While I’m sure the budget of the title influenced the artistic direction somewhat (since not everyone has Enix’s budget for style over substance), Earthlock serves as another example of a developer using their “limitations” as a strength and working within an art style that suits the game instead of focusing on hyperrealism or adding every bell and whistle possible.

Gameplay itself takes a traditional RPG approach. You spend time exploring in the field – both across a good sized world map and within dungeons – and battle monsters and general bad folks on a turn based battlefield that you whoosh into upon initiation of battle on said world map and dungeons. While exploring, you sometimes have to switch which character you control to use their abilities or stature to reach different areas. In battle, characters take turns according to their speed, with an indicator on the right side of the screen showing who will be going in what order for the next several turns. Your party has a variety of skills to employ in battle, ranging from attacks to magical skills to buffs or debuffs to protect you or hinder the enemy accordingly. Many of the buffs I found to be quite useful, especially elemental barriers, while I found that many of the debuffs suffered from the same problem that every turn based RPG has – the debuff that would actually help you in a situation never works. As an aside, what is the point of giving me a silencing spell to use if the magic-using enemy I try to use it on is immune to silence? I don’t need to cast silence on the brutish cave beast trying to smash me with a rock, developers. Surely you all know this, but I digress. 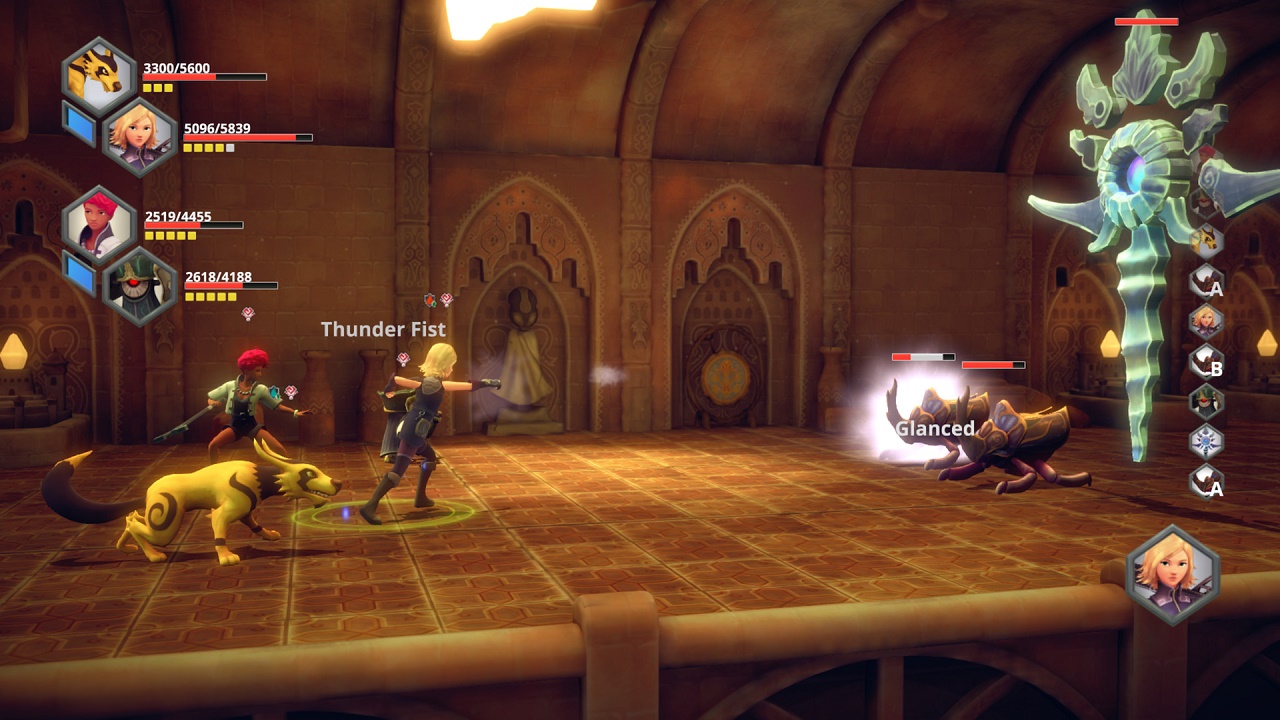 Gaining experience points and, thus, levels, will increase your HP and unlock slots on a tile-based skill system. By inserting cards that grant abilities, perks, or stat boosts, you can fully customize your characters to fit any role you’d like them to fit. Do you want to make someone balanced, nimble to avoid damage and attack quickly and often, or just a glass cannon that can knock enemies out in one or two turns? You can do it. Best of all, you can do that all on the fly, as once you’ve dedicated a slot to a perk or stat boost, you can swap it out with another tile whenever you’d like if you’ve got other tiles to use. You can even swap them between party members. It’s a very cool and unique system I haven’t seen before, that seems to borrow inspiration from other games, and a system I would like to see expanded upon.

Adding further depth to the combat is a stance system, where each character can change stances mid-battle to change up your tactics. If you need to take out a flying enemy, a few of the characters can switch from their melee stance to a ranged attack stance and attack with guns or crossbows. This also gives each character two sets of skills, meaning that each battle can be approached multiple ways using multiple combinations. Your party is also divided into pairs, meaning two people act as partners in combat. Practically, it only has two functions, though. 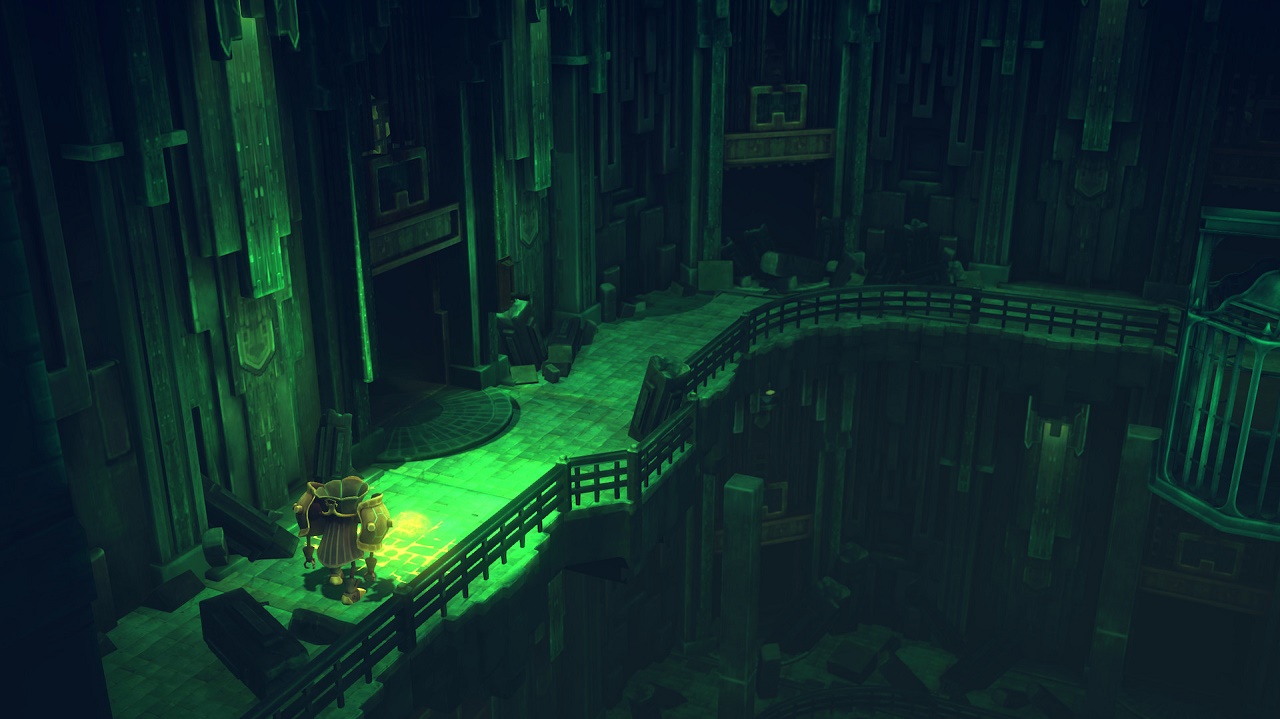 The first is super abilities (or limit breaks or whatever you would like to call them) and super stances. As your characters battle, their super meter builds until it is full and can be used. Once used, your character enters a super stance and can use powered up versions of their abilities to do tons of damage or restore tons of health. The second function is passive perks that you unlock by building up your trust level with each partner. Each pairing has different perks, meaning that some characters may have passive health regeneration, and others may have a better critical hit rate. It’s up to you to decide which is best, but unlike character stances, they can’t be changed until you’re out of a battle.

Entering and exiting battle has one of the smoothest audio transitions I’ve ever experienced, as music flows naturally from one situation to the other. While the sound effects are standard fare, they are serviceable and fit comfortably within the game world. Nothing seems jarring and everything helps to flesh out the experience of the game. The music in general is quite good and very enjoyable in an old school way, meaning that you will hear the same tune on repeat for quite a while without it ever becoming tiresome – perfect background music, in other words. There is no voice acting to speak of, but this is only an observation, not a criticism. Not every game needs Nolan North in it and it’s nice to have games incorporate some reading in them for storytelling every once in a while. 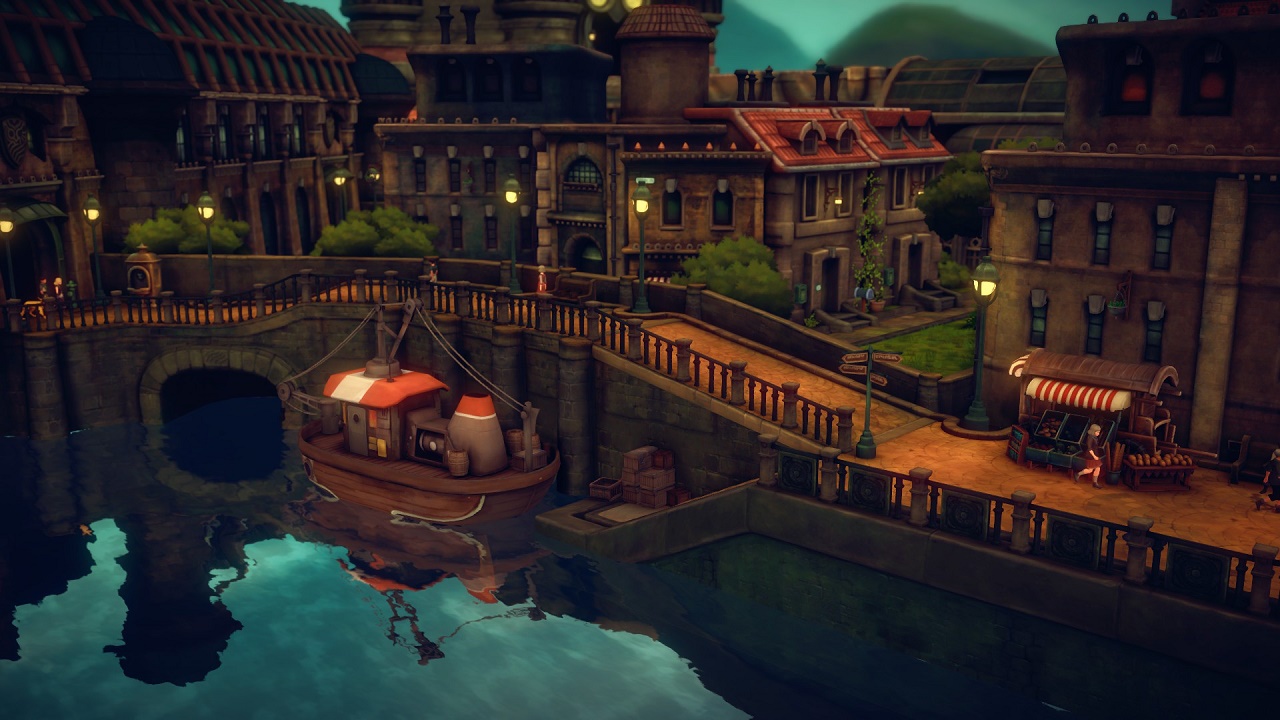 My criticisms for the game are mostly that the game world feels less fleshed out than I would like. That isn’t to say that I feel like any aspect of the game is mechanically under developed, simply that I would like to see more of the world. I would like to have more towns and cities to visit, shops to peruse, inns at which to sleep, just more interaction in general with the game world itself. There is an island that serves as your main hub between battles, and before I levy any sort of criticism at it, I want to say that the horticulture minigame is actually incredibly fun. Being able to grow your own ammunition and plant flowers and fruits and vegetables to harvest for potions and special items is wonderfully engrossing. That being said, this island hub is really the only place where you can sleep and shop, and does little to make the world of Earthlock feel like a real living place. The entire experience feels less like you’re exploring a world and instead just taking a guided tour through one.

I think if there were more hub areas to explore and visit, if the game took you through more cities and towns, you would have more opportunities for the cast to interact and give you more reasons to care about them as characters and the world in general. None of your party is unlikable, or worse, bland; there’s nothing so egregious holding Earthlock back. There is a modicum of character interaction here and there throughout the experience, and a good bit a dialogue. I would just like to get to know the cast of characters more, especially when I’m going to spend hours on end with them. To use a food analogy, if hours were portion size, Earthlock is a big meal. It’s presented on a dish of colorful graphics, and your dinner is being served with lovely music being played in the background. Where the gameplay is a delicious steak, however, the sides of your story, character growth, and immersion don’t quite match the quality of the rest of the experience. They aren’t at all bad, they just don’t match the rest of the experience.