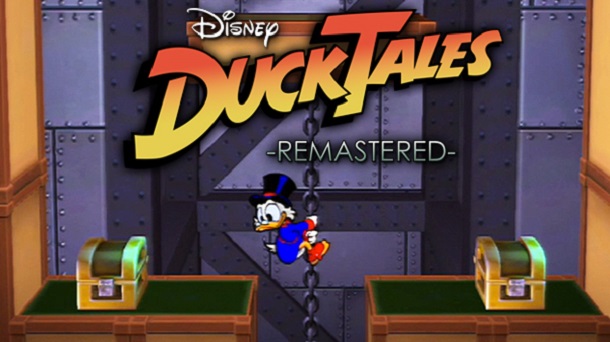 Take a look at our DuckTales Remastered video review to see if Capcom’s overhaul is a worthy venture for PC and console gamers.

Today we’re taking a look at Capcom’s remastered version of the NES 1989 DuckTales which was spawned from the animated TV series of the same name. Featuring Scrooge McDuck, his nephews and a whole host of likeable duck characters, the game offers some accessible platforming adventure. In a nutshell, the Scrooge McDuck character has one thing in mind, and that’s money and wealth. This is very much evident in the TV series as he strives to maintain being the richest duck of them all. However, as expected, with all that glistening gold readily available, gives cause for a number of undesirables to make themselves known.

The game attempts to offer some semblance to proceedings by a way of a story as opposed to simply entering its levels and collecting coin. The story, whilst mildly interesting somewhat gets in the way of the action, as at first, it seems every two steps and there’s another piece of dialogue to listen or skip past.

Aside from the story – which we won’t spoil here – Scrooge is armed with his walking stick as he travels through various themed locales including, The Amazon, Transylvania, Africa and even the Moon. From his palace, he can select which location to visit first, adding a bit of free choice to proceedings.

Gameplay consists of using Scrooge’s walking stick as a pogo stick to bounce to new heights, smash blocks and bop enemies on the head. He can also use the stick to whack items such as blocks and containers – normally reserved for progression or hitting troublesome foes.

The game on easy is fairly simplistic, requiring deftly jumps and timed runs through and around various hazards. There’s even a map available to highlight where everything you need to collect for progression is, and bosses which take far fewer hits to demolish. Pump up the difficulty, and the game begins to add a bit more challenge, and on the toughest setting becomes an exercise in patience and pad throwing! It’s one of those games were death and restarting is inevitable, but at least for those who look around and can memorize the locations of hidden areas will find upgrades to Scrooge’s life which come in handy as the default three are not enough to survive the horrors.

In a way, despite its simplicity and kiddie look, there’s a decent offering of challenge which will suit seasoned gamers and younger gamers looking to see how far they can go.

DuckTales Remastered has given the old 8-Bit game a new lick of paint and now looks very much like the animated TV series and is fitting for today’s gamers who expect a bit more from downloadable games. Wayforward has done a grand job in all departments, creating likeable renditions of duck characters to jump on or rescue. However, as mentioned, there are a lot of still scenes involving talking characters whose beaks don’t move at all when speaking which is somewhat a shame considering the levels of polish in getting the game’s animated look just right. It somewhat takes you out of the experience and just feels like a relic of the old 8-Bit game still present.

The audio is of a high quality,with the Scottish sounding Scrooge and side kicks being voiced by their original actors for the most part. For fans of the TV show, this is must and it’s good no expense was spared in this department.

DuckTales Remastered isn’t the longest game and if perusing the leaderboards, can be completed in under 30 minutes for those doing speed runs. A reasonable time is between two and three hours with replay value being determined by how much you care for unlockable art and movies or simply besting ones own (or friends) times for game completion.

For gamers looking to spend a few hours jumping around with familiar looking characters, then DuckTales Remastered is very much an enjoyable game that looks and plays nice. However, for the asking price, it’s perhaps a little two shallow in terms of overall content, and if you’re a one play deal type of gamer, then two or three hours might leave you feeling short changed. On the other hand, if you’re a perfectionist, then replaying the game adds much more entertainment value.