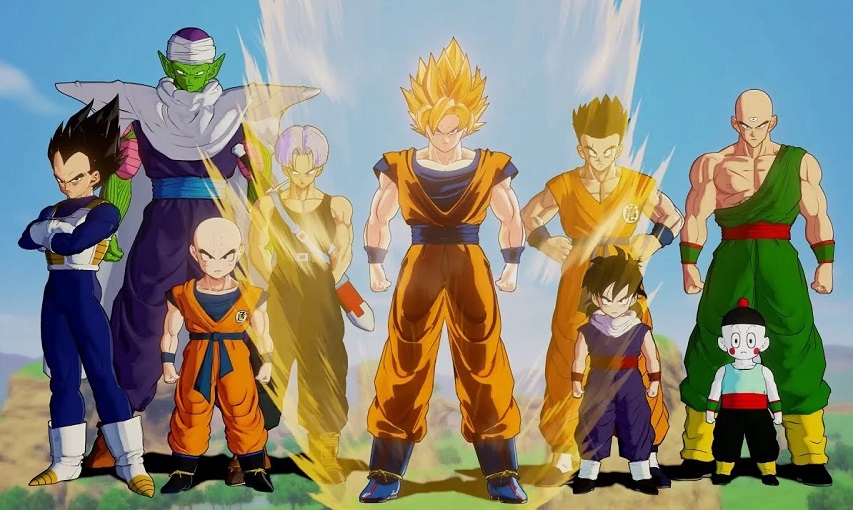 Bandai Namco and Cyberconnect2 released their eagerly awaited fighting role playing game Dragon Ball Z: Kakarot. The game follows the story of all-round good guy Goku (AKA Kakarot) from the Saiyan race who comes to Earth to take it all. However, being the good guy he becomes embroiled into the ways of Earthlings and leads a humble/normal existence. That is until his dying-race and sibling Raditz comes to Earth to find out what happened with the take-over. Cue lots of fighting, screaming and transformations as the story follows the anime plot.

Small disclaimer here, we haven’t watched the anime and aren’t familiar with all the characters. We’re looking at the game with fresh legs so to speak.

Cyberconnect2 presents an open-world type experience but you can clearly see a similar template used here as with their Naruto games. Effectively players undertake a variety of optional menial tasks such as fishing, eating and collecting to aid in having a better set of characters to play with. That said, the combat itself (more about that in a moment) is so basic that with skilled fingers it’s quite possible to ignore all the extras and just fight your way through the key story sections.

Perhaps that’s not doing the game any justice, except the extras don’t amount to much that will hold interest. Take the side-quests for example which have you interact with various characters from the series. It’s nice to see them here but effectively you’re repeating fetch quests or beating-up enemies to fulfil the goals. It’s not particularly inspiring for an open-world experience.

Players can customise their characters specials and such-like by collecting orbs littered around the maps. This is a nice distraction whilst sprinting or flying around where the upgrades actually helps in battle. But it’s a little tedious to spend time focusing on when better use of ones time is spent fighting or continuing the story. For us, we simply used the moments going from A to B (of which there are plenty) to grab any orbs en-route. Another layer comes in the form of community based stats where placing characters met in the story or in the field ( soul emblems) on various grids increases stats such as extra attack power, HP and recovery etc. Players can level-up here in line with how they gift their community characters which is neat but not entirely necessary initially. It sounds complex but isn’t really.

As mentioned, players assume the role of Goku as the primary character, but also control several others like Piccolo and Gohan, even Vegeta at times, which is a nice touch. This means spreading the upgrades across all the characters to get the most out of the game. That said, the differences between each fighter is rather minimal during combat aside from their special attacks which is a shame.

Looking at the combat then, and it’s a button mashers paradise with little in the way of tactics. Players can dodge attacks, counter-attack, charge-up power and unleash specials which is great. However, the basic one button attack is simplistic and somewhat repetitive. When you couple this with enemies who have elongated health-bars it makes each battle a little too drawn-out at times. Aside from the basic attacks, players can also set two other team-members to aid in specific battles and random encounters in the open-world. Combo attacks are an option, as well as support attacks. Again, the similarities with the Naruto fighting game is quite obvious here. Overall, the fighting looks dramatic, has great presentation but as mentioned rests on the repetitive side especially when fighting back-to-back. The saving grace here is anyone can pick-up-and-play without too much knowledge of fighting games or learning combos.

In terms of visuals, this is a colourful game which sports wonderfully crafted cutscenes and direction. However, some cutscenes are in 30 fps rather than 60 fps which is immediately noticeable. Still, fans of the anime will lap-up the dramatic moments and those unfamiliar can sit-back and feel like they are watching an entertaining show. In the field, some asset pop-in occurs which is a shame, especially on PC. However, the game just looks colourful and fresh at 4K resolution with few dips here and there.

Audio is of a high quality with a choice of Japanese or English dub with the original voice cast. It’s excellent and when you couple this with some great dialogue (in the simplistic sense) players will be entertained. The only gripe is some repetition of quips during the fighting.

Spanning many episodes of the anime, this game offers great value with the playtime running well into double figures. With some side-content as well, players should get their monies worth and more if they aim for full completion.

Dragon Ball Z: Kakarot will appeal to fans of the series without a doubt despite the familiarity of events. However, if you’re like us and aren’t overly familiar with the wider DBZ story then this serves as an entertaining ride to get up-to-speed. The RPG elements aren’t so interesting here although levelling-up moves and the community board is welcome. The fighting works very well and despite some repetition is the main event here. Can we recommend the game then? Well yes it serves as a decent offering for newcomers and younger gamers especially. However, it could improve in some areas such as a more adaptive combat system that allows for advanced players to shine. The open-world content could be a little more diverse as well. With this in mind though Dragon Ball Z: Kakarot is a neat game to sink your time into but might be a little shallow for those looking for a more complex fighting/RPG experience.