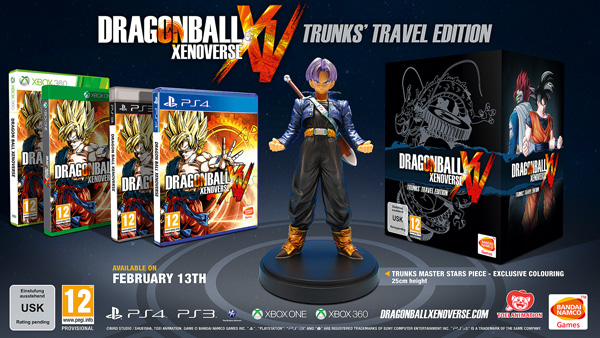 Bandai Namco Games announced the Truck’s Travel Edition for their forthcoming fighting game Dragon Ball Xenoverse which marks the first time the series will appear on Xbox One and PS4 consoles. The “Trunks’ Travel Edition” for consoles only includes a beautiful Trunks Master Stars Piece 25 cms Figurine with exclusive colouring. The game releases on PS3, Xbox 360 PS4, Xbox One on the 13th of Feb 2015 and the 17th on Steam for PC. For more information head on over to the official website.

Pre-ordering the game for consoles at participating retailers will get you:

• An amazing Shenron Black Metalcase
• Super Saiyan 4 Vegeta as a Playable Character
• 2 exclusive Frieza Soldier’s Battle Suites to customize your avatars.
Pre-Ordering the game digitally (STEAM, XBL and PSN) will get you all the above amazing items, minus the Metalcase! All of those won’t be sold afterwards!