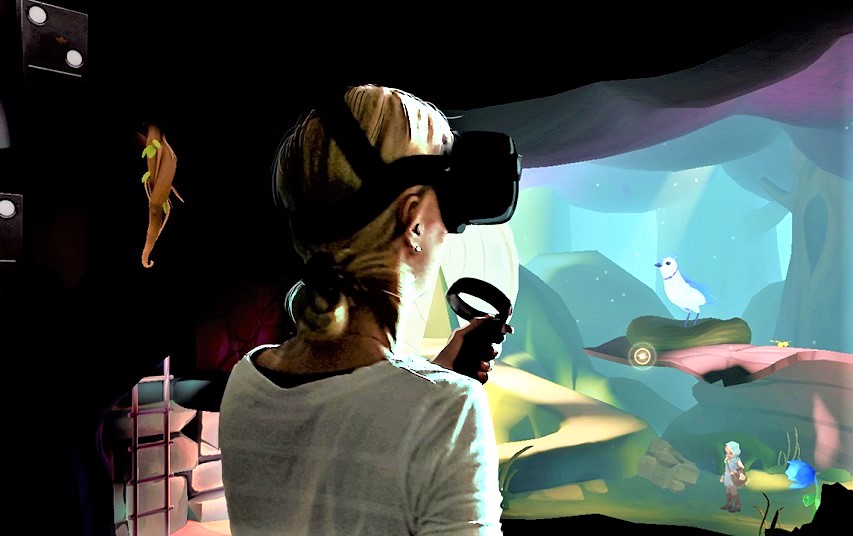 Cortopia Studios revealed a new VR game during Gamescom 2019 with the announcement of Down the Rabbit Hole. We played the demo and found a likeable relaxing adventure experience that draws you into its characters and story. You assume the role of a girl and the four-and-a-half of spades playing card. Swapping between the two at the touch of a button.

The story rests inside the realms of Lewis Caroll’s Alice in Wonderland but isn’t directly related aside from some familiar characters and themes. The game opts for a doll-house side-on view which shows-off some great 3D depth effects and allows players the chance to move closer to see what’s happening in each area (especially when using Oculus Quest). Interestingly, grabbing various roots or branches allows you to pull the whole play space around offering a neat way to get a better look.

The short demo presented a few puzzles such as finding butterflies for the Cheshire cat and ringing bells to unlock domino themed doors. There’s some navigational puzzles as well in terms of making sure both characters traverse the level.

Down the Rabbit Hole is a charming VR experience with great voice overs and a relaxing flavour. We would imagine this is suitable for those with less VR experience and younger players alike, although vets can have some adventuring fun here as well. The game plans for a December release and aims to come on PSVR, Vive, Rift, and Oculus Quest.