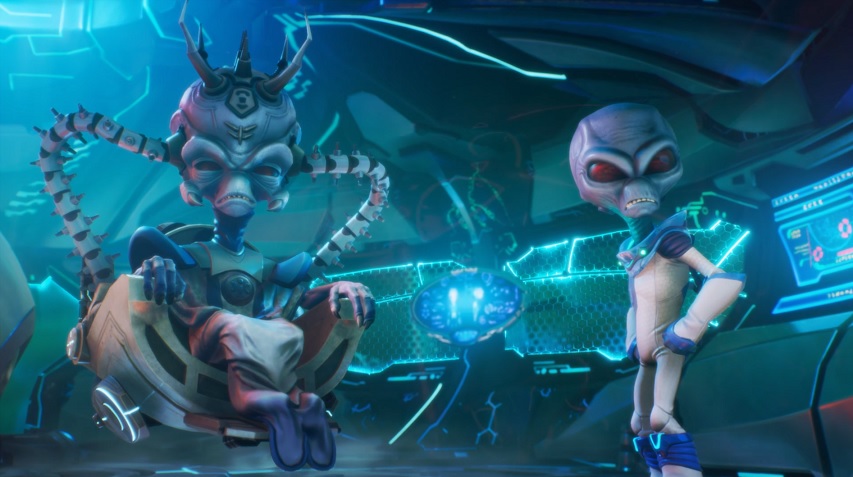 Black Forest Games present a return to the 1950s with a remake of the Xbox and PS2 classic Destroy All Humans. Some 15 years later are the jokes still funny and the B-Movie approach welcome in glorious HD/4K? Take a look at our Destroy All Humans review.

Today we’re taking a look at Black Forest Games remake of Pandemic Studios 2005 Xbox and Playstation 2 action game Destroy All Humans. The game offers a complete remake for a new generation of gamers.

Cutting-to-the-chase, Destroy All Humans is a comedic action-game which references the 1950s B-Movie era with witty jokes and remarks. The story is pretty simple as players assume the role of alien and clone, Crypto 137. His task is to head to planet Earth and discover the fate of his predecessor Crypto 136, who on a mission to the planet went dark. Having found humans residing on Earth, Crypto is tasked by his leader to harvest the human brains for Alien DNA and as the namesake suggests “Destroy all Humans!” Well not quite.

Interestingly, the gameplay isn’t just a one-trick-pony though, because whilst there is quite a lot of wanton destruction and players are free to cause quite a bit of havoc, some levels require more sneaky actions. This is where stealth or subterfuge come into play. These moments are perhaps just as enjoyable as the destructive action orientated gameplay moments or at least offer some diversity. It’s here where players can take on human forms by jacking into their victims head and then resume wandering around undetected using their form. It’s timer based which means players need to constantly scan NPCs to remain hidden in this way. If you’re seen taking over a body, or performing a suspicious activity then your alien form is revealed and cover blown. It’s a neat mechanic where in some missions becomes a requirement to remain hidden to avoid failure. Crypto has options to control humans as well as make them forget what they have seen. Alternatively, you can simply pop their brains before they raise the alarm.

The aliens have quite a few neat tricks up their sleeves as the game progresses, with Crypto able to upgrade his weapons, shields and abilities for himself and his saucer with collected DNA. However the humans wisen-up throughout the campaign and begin to adopt counter-measures making Crypto’s job far more challenging. What starts-off as humble infantry with the odd tank here and there, becomes full-blown men-in-black style agents with alien busting weaponry. That said, the game is ,mostly pretty easy to play if you’re mindful of your surroundings. However, at times the difficulty ramps-up quite substantially, such as when facing-off against bosses.

In terms of shooting and generally having fun with the game then it accomplishes this core mechanic very well. It can become full-on when the game’s “wanted” meter reaches its limit. What’s neat is being able to return to completed areas for additional challenges or just free-roam mayhem. It here’s where Crypto’s vulnerability shows once all hell breaks loose where perhaps death is inevitable when a constant stream of attackers spawn all around you.

In terms of visuals, Destroy All Humans looks great where the make-over really shines compared to its original which appears bare bones in comparison. You can now look at building interiors (but not enter them unfortunately) and environments generally feel more lived-in. Destroying buildings also feels more visceral creating a far more enjoyable romp. The update certainly feels fitting for a game in our current times. That said, this isn’t another HD remaster but a complete visual overhaul and looks all the better for it. On PC then, there are quite a few options to tweak and if you’re running on a top end system, then it sticks comfortably to 4K 60 frames per second at max settings.

Audio is a massive plus here with great performances all round accompanied by an eerie soundtrack. Some of the NPCs repeat phrases when you scan them but that’s a minor niggle. The humour is pretty much on-point though whether that’s the B-movie loading screens or voice overs and will raise a smile or eyebrows in equal measure. It’s very much fitting of the 50s period, so some players will need to bear in mind references to sexism amongst other things.

The Destroy All Humans story takes around 8-10 hours to complete or less depending on your skill with some 20+ missions. You can also mess around with each level for additional challenges and free-roam. Therefore, player mileage will vary especially with things like collectables to find.

Destroy All Humans comes across as a neat throwback game from 15 years ago where much of the dialogue and humour still works today. The gameplay offers a fair amount of variety despite some minor glitches here and there, and the visual overhaul is a real treat if comparing to the original. As a game though, it’s quite simplistic where its story is the main driving-force. It’s also fairly easy to wade through each mission (aside from the frustratingly cheap end-boss). If you’re looking for an entertaining non-taxing third person shooter with some stealth elements tossed-in and where you play the villain, then this is neat game to pick-up-and-play. If you’re looking for something a little more intelligent then this might not scratch your cerebral itch.