Bungie’s online shooter Destiny has seemingly gone offline for gamers playing via the PSN and Xbox Live. If you were playing, then you would have been booted from the game world to the main menu where attempting to login again presents an error message. Bungie hasn’t commented on this yet, and it’s not clear whether this latest disconnection will last minutes or much longer, however it isn’t the first time this has happened. 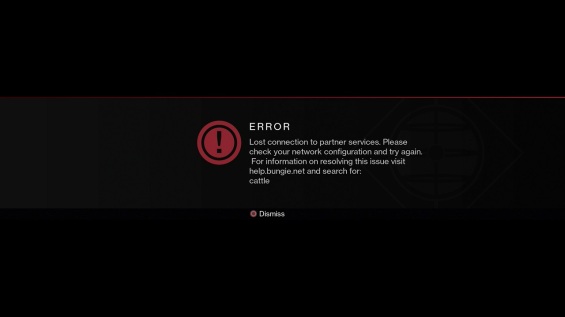 Meanwhile, Destiny offline as a game means it’s completely unplayable when these issues occur, where there’s nothing to see or do other than trying to reconnect or go outside and get some fresh air. Some have suggested hackers (Lizard Squad) were at work in the most recent outage earlier today (which has since been corrected -Ed.) causing a DDoS attack for maximum disruption according to these tweets, but this might not be the case. Either way, a number of gamers were probably pretty annoyed during the disruption and what’s really sour is the fact that a lot of the game’s content (Grimoire cards earned from completing tasks in-game) is tied to the external Bungie.net website instead of being accessed via an incorporated encyclopaedia and stats. Imagine how downtime could have been spent going through the wealth of information contained within the cards. The Grimoire cards and their details can be easily overlooked, but with a bit of investigation there’s some neat info and bonus progress to check out as well as lots of information about the Destiny world and its inhabitants. It’s understandable why Destiny is an online only game, but does that always have to mean all or nothing?