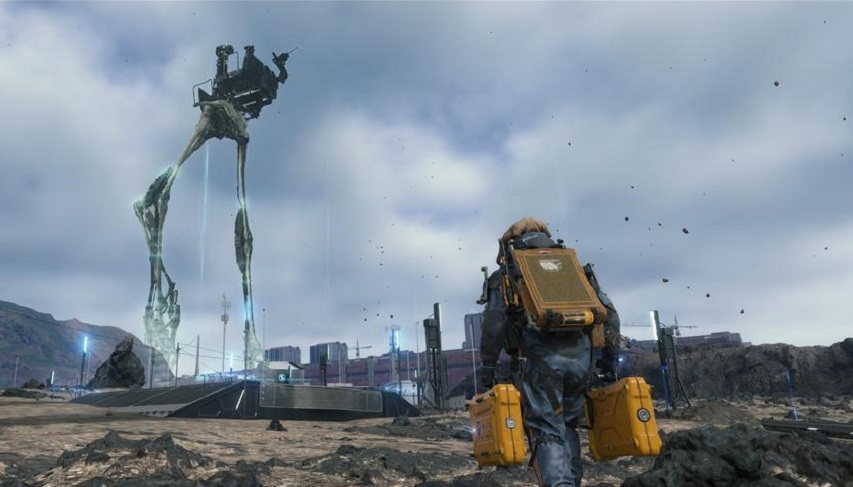 Hideo Kojima’s Death Stranding released on PS4 back in November 2019 with some mixed reactions from the gaming community and media alike. Fast-forward to now and the game released on PC. It’s essentially the same game with the added bonus of native 4K support, widescreen support and some additional Half-Life themed extras. For PC gamers then, is this worth a look-in? Find out more in our Death Stranding PC review, bearing in mind we played the game on the PS4 Pro when it released.

Today we’re taking a look at Kojima Productions divisive open-world, asynchronous online multiplayer, stealth-action, horror, survival, walking simulator, RPG…ok you get the point. Death Stranding comes from the adventurous mind of famed Japanese video-games producer Hideo Kojima, famous for the Metal Gear Solid franchise of stealth-action games. This is the studio’s first independent outing since leaving Konami back in December 2015. The game released on the PS4 in November last year and just over six months later appears on PC with some additional features expected of the platform. Most notably, higher resolution at 4K 60 frames per second (more about that later), widescreen support, visual enhancement features such DLSS 2.0 tech from NVIDIA and six new Half-Life themed missions.

So what is Death Stranding about without going too-deep into the story. In its basic form, the plot sees players assume the role of Sam Bridges (played by Norman Reedus) in a post-apocalyptic United States as a freelance porter. The world has become torn between the living and the afterlife after a devastating “Death Stranding” event. Basically it means ghosts or invisible entities called BTs roam the lands, neither on earth or in the afterlife. These events give rise to Sam’s porter skills, because the surviving humans remain dotted about in colonies unable to step outside due to constant rain that speeds up time and decay upon touch (Timefall). Then there are the aforementioned BTs, alongside bandits and other unsavoury types. Luckily, Sam has the ability to detect the BTs which gives him an edge in the porter business. So, for the entirety of the game, Sam runs errands for the vast bunch of misfits who reside in their safe houses across the United States.

During the game’s opening , the company Bridges approaches Sam (the same company he previously worked for prior to becoming an independent). His sister asks him to connect America by connecting the Chiral Network across each state from east-to-west coast. Whilst initially reluctant, Sam agrees. And that ladies and gentlemen is the crux of the game. For the next 20 hours or more, players speak with key-characters who push Sam further into more delivery missions for the colonies, all the while with the grand goal of re-connection. It’s fetch quest galore here. Collect items from point A, then walk, drive or scooter to point B, drop off the goods, followed by a rating for your effectiveness, then do it all over again to somewhere new on the map. The more people Sam interacts with, additional items become unlocked to help him complete his tasks easier. That’s power legs upgrades, vehicles, weapons and extreme gear for the more hostile environments you encounter later in the game.

In its basic form the game sounds rather dull, and to a degree in the traditional gaming sense it is. Cleverly Kojima productions turns what players normally ignore or mentally bypass into a game itself – that’s the simple act of walking/running. Where Death Stranding works as a walking simulator then is how players help Sam navigate the varied terrain. It’s not all flat plains but rather natural looking areas of mountains, rocky formations, rivers and steep slopes. Whilst perhaps easy enough to navigate as a sight-seeing tourist, for a porter who often carries a heavy load on his back becomes a minefield of possibility.

Players look at what is ahead and plan the best route taking into consideration not to slip, fall-over and damage, or worse lose the cargo. You can immediately sense the deliberate game design which beckons you to attempt the most direct route, but in the long-run it’s more hazardous and might actually end-up being slower than if you took the longer way around. It’s this toying with your sense-of-adventure and understanding Sam’s abilities that works well here. Normally in games players press up on a thumbstick or button, and aside from a bit of jumping the rest is an automated process. In this game, players need to be mindful of every single step. That’s impressive and bold then, to make a game about one of the basic fundamentals of video gaming. Move too fast and Sam might lose balance and fall over, too carefree and the elements might destroy your cargo. Players can use tools such as ladders and ropes to navigate tough terrain, but as the game progresses Sam can build helpful structures such as generators, bridges and zip-lines. Interestingly, the online connected world means once inside the Chiral Network players can help each other out without direct interaction. That means you might lay down a handy bridge across deep waters and that same bridge appears in other players games and vice-versa. Not only that, due to the constant erosion from the Timefall, means other players can aid in its upkeep. It’s a pretty cool system marked by player icons and a social media inspired “like” system. You’ll be constantly notified when another player interacts with your handiwork which is a neat feature and the option to dish-out likes is present at every turn. The interactions don’t stop there either, as you’re able to deliver lost cargo from other players as well and trodden paths by the many show suitable erosion making the terrain easier to navigate. The asynchronous online play is pretty neat overall and fitting for this type of solitary feeling game.

Death Stranding doesn’t necessarily leave players in the great wilderness, alone all the time though. Players need to be aware of Sam’s health, stamina and effectiveness all the while not only battling the Timefall but gangs of raiders and the BTs. It’s here where Kojima’s stealth antics come into play allowing players the choice of sneaking or engaging full-assault. Early-on Sam’s offensive capabilities are quite limited where stealth is the only favourable option, but further into the story he can dish-out some punishment with an assortment of rifles, pistols, grenade launchers and such like. Interestingly, there are specific ammo types for the BTs and Human enemies as you would expect. The combat mechanics work well, but the most rewarding moments are when you’re sneaking around avoiding combat. In the case of the BTs these play-up to the game’s horror element because they can be a pain-in-the-arse. Not only very difficult to see (even with the help of your BB unit (that’s a baby attached to your front) which highlights the BT’s general proximity to you), but can ruin your day and drag you into a battle with a tar-covered monster! Losing cargo is no fun either, and if completely damaged or lost means a trek back and start again, or at least a reload. Sam doesn’t really die in this game and gets KO’d and his stuff stolen, or he’s warped to another realm where he can reconnect back into the game. The combat works and in certain sections is the mainstay but generally the player chooses how to tackle each delivery.

Looking at the game’s visuals on PC then and it’s obvious the graphics look fantastic running at max settings in 4K. It’s a lot sharper looking and in some scenes becomes far more realistic than its PS4 (Pro) counterpart, that’s not to say the PS4 version is lacking. It’s a neat visual upgrade but pretty much plays the same with some additional assets thrown in for good measure. The boost in frames per second is nice also with 60 being preferable over the PS4’s 30. Our RTX 2080 Ti was able to run the game in 4K max settings with 60 fps throughout which is great. Death Stranding is a pleasant looking game whether you’re admiring a valley and its meandering waterways, or up high in the snowy peaks looking down. The Decima engine really shines wonderfully here.

Audio is also of a very high quality with its haunting soundtrack that kicks-in at opportune moments. There’s some great tunes on offer which you can play in the music player or listen to as a bonus for this version. Voice acting is also on-point with Reedus providing gravely tones against the rest of a somewhat cameo cast and Troy Baker acting the villain. The modelling of characters is top-quality making each cutscene impressive viewing in its own right.

Death Stranding comes in with many hours of play and with its online component and the option to undertake non-story based deliveries means there’s plenty to do here. There are six bonus Half-Life themed missions here as well which is a nice extra for PC players (we won’t spoil those for you here other than you’ll need to hunt down various items without the aid of markers).

Right-off-the-bat, it’s clear Death Stranding isn’t a game for everyone. The walking simulator aspects, whilst clever still leaves a lot of time doing very little in gaming terms. Not everyone is going to appreciate that and if you’re looking for a horror stealth game, whilst it’s buried in here, it’s not the entire focus. So we’d suggest those who are after a more stealth-action game to perhaps look elsewhere. Gamers who have an open-mind will find an interesting outing into Kojima’s crazed mind and if you “get it” then there’s some liberating moments. At times the game is draining by-design but that’s also its defining feature. You can feel mentally exhausted by its systems but the reward is worthwhile in the end. We can’t recommend this game to everyone but for those who know what they are getting into will find a game that seems to fit it all in without excelling in any particular field, aside from the walking that is. Death Stranding is just weird whilst presenting familiar gaming ideas drawn-out into its dark and twisted depths. If that sounds like your kind of game, the go-for-it and don’t look back. if you’re looking for more immediate gratification then simply avoid this.