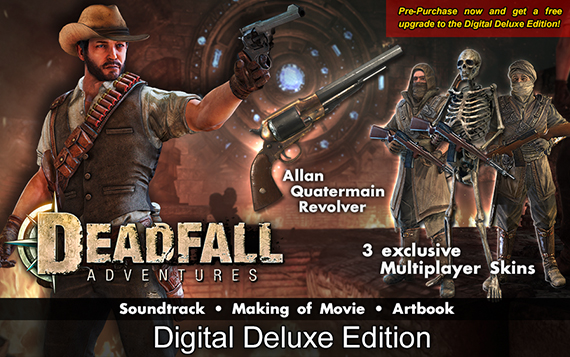 Nordic Games released a new Deadfall Adventures CGI trailer as well as some new images from their forthcoming game which is available to pre-order via Steam for £39.99.

Gamers who pre-order Deadfall Adventures now on Steam will receive a free upgrade to the digital deluxe edition.

In Deadfall Adventures, players take on the role of James Lee Quatermain, as he and Agent Goodwin strive to be one step ahead of the Nazis and the Russians, one step closer to obtaining the “Heart of Atlantis”. Deep in the temples, where age-old guardians awake from their eternal slumber, James soon learns that his great-grandfather’s stories are not as crazy as he had always believed. For all things live forever, though at times they sleep and are forgotten.