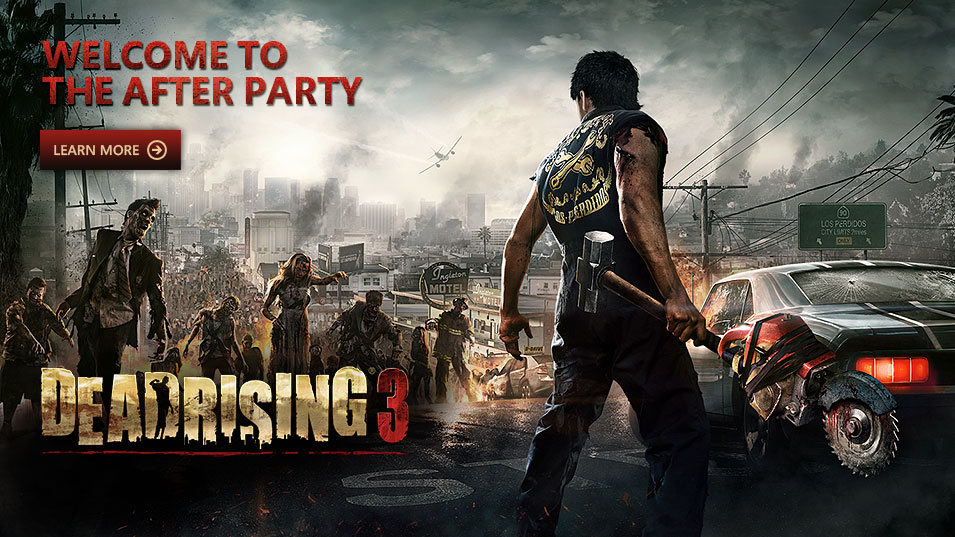 Dead Rising 3 launched alongside the Xbox One games console and showcased what can be done with a bit more power under the bonnet in terms of rendering lots of characters on-screen at once.  Whilst the game sports some impressive looks, the gameplay has seen an overhaul making for a less frantic game despite the premise of more zombies. Take a look at our Dead Rising 3 video review for more details.

Today, we’re taking a look at Capcom’s first game on Xbox One and the next in the Dead Rising series, in Dead Rising 3 which sees players assume the role of handy mechanic with a dodgy past Nick Ramos, a cast of survivors and a sinister plot involving moody and somewhat typical bad guys that look to profiteer from the now third zombie outbreak ten years after the last game. The location of  Los Perdidos is new, and is split into four areas which can be explored at will and offers a much larger sandbox style playing field.

Getting down to the nitty gritty and at a glance it is business as usual, except, Capcom has decidedly toyed with the core ideas of the other games and tweaked the gameplay to be a little more forgiving in pretty much every area. For newcomers, the ease of play will be quite welcome, but for those well in tune with past mechanics will probably find the dumbed down approach a little too easy.

From the offset, Nick can now craft weapons and vehicles at any time as opposed to having to visit the work benches of the previous games, this keeps the flow of the game as focused as possible without the need for any backtracking as a result, some of the tension is lost. In addition, the singular safe houses of the other games is ditched in favour of several which when accessed  can be used to change clothing and change weapons. This is where the games scavenging becomes a moot point because once an item has been picked up, it will immediately be available to spawn in at a safe house, this includes all the combination weapons as well, and means players no longer forage to survive and merely return to a safe house to resupply. Again, some tension is lost here and changes the core gameplay considerably. Nick can also carry books outside of his regular inventory, and can only equip one at time until the skill to use them all is gained at level 50.

Players gain points each time they level up and are given a choice in how to develop Nick’s abilities rather than them being automatically assigned. Whilst it’s good there’s some choice here, it doesn’t change much considering, it’s easy to work out that things like inventory space is a priority over some of the other skills.

The survivors make a welcome return, but their inclusion is also tainted with accessibility. No longer are players required to escort them back to the safe houses, and instead once their associated task is completed become yours to command and fight alongside you. They automatically return to the safe house if you move away from them. What is good is how you can now call on saved survivors to help out and take them into the zombie filled streets for some team based action. Players can give them weapons and food, but are generally a bit smarter this time and come with their own stats.

The core story is fairly tame and won’t provide too many surprises as the initial group of survivors make their way out of the city before the big bomb drops.  There is a time limit for the overall story spanning several days, but it’s the side missions which are time based, and there is a chance of running out of time overall if you take too long messing around. At a steady pace, there’s plenty to not even worry about, and if problems do occur, there’s a handy chapter select option which retains all of Nick’s attributes and items.

The whacky boss encounters make a return here, but are relegated to being optional side objectives rather than part of the main story. There’s an assortment of crazy individuals who offer no real back story and become fodder for Nick’s too powerful arsenal of weapons.

The driving has been given a major boost, and rightly so as the city can be explored fully without any loading times and with interconnecting highways making getting from one locale to another rather easy. The larger play area makes driving a necessity, and with customizable vehicles, and lots of zombie obstacles is fun and full on for the duration. The car handling could have been a bit tighter, but works well enough in context of the rest of the game, and then there are easy to control motorbikes if those are preferred.

In terms of looks, Dead Rising 3 ups the ante quite considerably with not only a higher zombie count overall, but an impressive lighting engine and better texture detail all round and much more detail on the character models. There are some moments where the Forge engine struggles and the frame rate dips, but these don’t impact the game too much. On occasion there are areas where the textures take time to load in, but again, these don’t hamper the game play at all and simply look a bit messy for the split second they appear.

Audio is of a high standard as expected with some good performances from the main cast and plenty of other sound bites which add lots of atmosphere to the city. It’s a shame the script isn’t better thought out, as instead opts to sit on the side of predictable cliche more than venturing out into something a little more meaningful. That said, there’s some solid spot music, and colourful almost pantomime characters, that keep the city alive and kicking.

Kinect is used frequently here to either shake off zombie attacks, shout at bosses to create openings, navigate the survival menu, or command survivors. It’s a welcome inclusion but is entirely optional which is good thing in some cases. What is annoying is how the game unpauses itself when a noise is heard and can result in a game over screen if left alone without going to the Xbox One home menu first – whether this is an intended joke or not, isn’t clear, but seems a royal pain in the rear.

Dead Rising 3 offers many hours of entertainment, despite being a little on the repetitive side in terms of what players end up doing in game. There are optional side activities to mess around with, collectibles and challenges to best, but nothing that mixes things up a bit more which is a shame.

There is two player co-op to mess around with as well with the wider field being able to drop into your game, but this requires some good team work lest the game becomes a split adventure and somewhat pointless with two players not working together. That said, for those wishing to play solo, there are options to prevent others from joining your game which is good.

For players looking for a more classic version of the game, there’s a more challenging Nightmare mode to mess around with which adds more strictness to the time limit and ditches saving game anywhere.

To conclude, Dead Rising 3 offers a more accessible game than its predecessors and provides plenty of opportunities to kill and maim the un-dead with its assortment of conventional and fantastical weapons. It’s  a lesser thinking man’s game than before and in being  less regimental, piles on the action in spades which is good. As a result, there is a loss of tension which makes the game very easy to pick up and play without having to think too much on what to do next. Purists might not gel so well with this simplistic approach, but there’s still a solid game here that works well under its new guise. If you like action games and are a fan of the series, then Dead Rising 3 is likely to be well received, if you’re a newcomer, then there’s lots to see and do with little learning required.