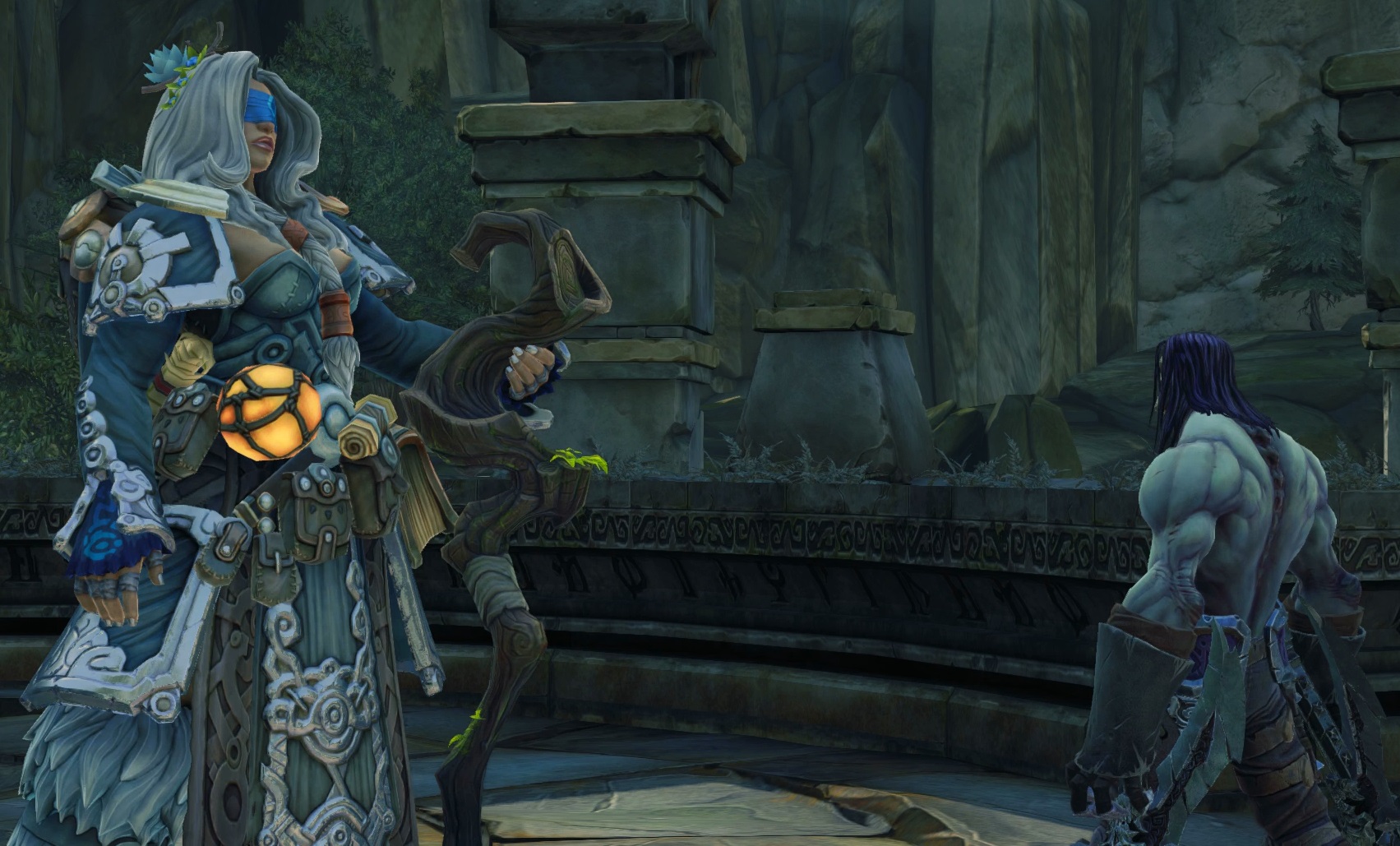 Gunfire Games revises Vigil Games 2012 release of Darksiders II with their Darksiders II Deathinitive Edition which offers the game on Xbox One and PS4 for a new generation of gamers. We thoroughly enjoyed the fantasy romp as a playable Death character on Xbox 360 and so to see it again in many respects feels like a good move – especially if you missed out on the fun and games the first time. However, three years after the game’s original release and expectations have changed which means last gen games getting a makeover are having to compete with games being designed for current systems directly. In its defence and before we go into any specifics here, Darksiders II Deathinitive Edition is cheap coming in at under £20 and offering many hours of gameplay making it a worthwhile package for console gamers. PC heads will no doubt be able to pick up the original release for small change via various deals but this is strictly aimed at Xbox One and PS4 audiences. So is the game worth the investment? Take a look at our Darksiders II: Deathinitive Edition review for the full picture and you can check out our review of the original Darksiders II game in the video below for a more in-depth look at the gameplay.

So, what do you get for your investment? Well the story is pretty straight forward as lead character Death seeks to free his brother’s name (that’s War from the first game) of his crimes as he was blamed for the everything bad that could possibly happen in the universe and the fall of humankind. Death’s aim is admirable for such a dark character but as you would expect when Nephilims are concerned there’s twists and turns and many tasks required before this plan can be deemed successful. Basically it’s great excuse for Death to maim and kill at leisure undertake some fiendish puzzles and interact with a strong cast of (well performed) mystical characters.

The gameplay feels tight as Death can climb up on walls, run along them, grapple and all sorts of other skills which are granted as the game progresses. What’s clever about the gameplay but also a hindrance in many ways are the puzzles which can leave players stumped but are fairly easily solved with a keen eye looking around the environment for clues and a bit of lateral thinking. Once the solution clicks, it’s pretty satisfying and shows how well the game levels are designed as they interlock with each other across multiple floors and rooms. For action gamers they can intrude quite a bit on occasion but as mentioned persistence pays.

A great feature of the action is how Death can equip various bits of armour and weapons which means there’s a meta-game of collecting upgrades and new loot as you play whilst it’s quite easy to fall in to sticking with reasonable gear, the quest for something better always looms and provides a more engaging element to simply killing the masses of enemies over and over for the sake of it. With its wide open interlocking expanses of play areas and tight dungeons there’s a fair bit of variety across the free roaming lands. Throw in some larger than life boss characters and you’ve got an massive adventure filled with wonder to explore.

So the main point of the Deathinitive Edition it seems is to provide an overhaul of the visuals whilst keeping the core game intact. In this regard Gunfire Games has succeeded as there’s no differences in the gameplay compared to the original release. However, the changes come with the game’s graphics where there’s a distinctive sharpening of the textures although there’s a change in the game’s colours as a result. We’re seeing more detailed textures which is great, but on the other hand there’s a slight loss of colour. You can see our comparison video below to see those differences in action.

It’s perhaps personal taste as to whether the increased resolution at 1080p and sharper textures are better than the original’s more colourful looks but what does come as a disappointment is a locked 30 frames per second rather than going the whole hog and offering 60. During play there are even noticeable dips below 30 which means the PS4/Xbox One hardware still struggles to keep up with the game’s demands which is a shame. Still, it’s an improvement over the last gen offering with no screen tearing this time but just could have been a bit better to warrant the upgrade for those who already rinsed out the original release. 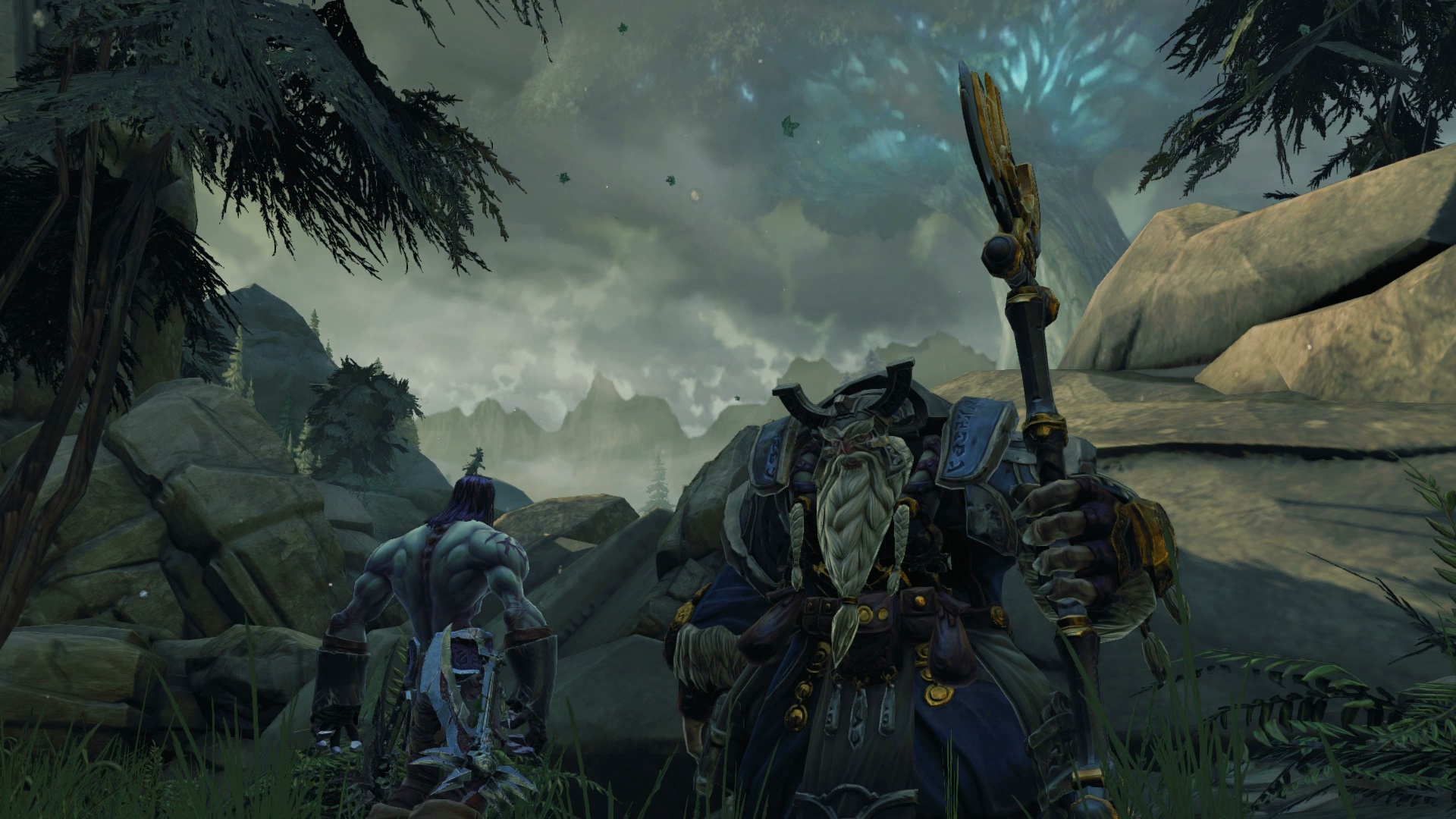 Darksiders II: Deathinitive Edition is a welcome addition to the current gen systems as the gameplay is top quality and holds its own rather well against today’s offerings. The only negative here is that the visuals haven’t aged very well despite the touching up of textures and the lack of a bump in frames per second which leaves the conversion lacking. So, if you’ve already played to death (pun intended) the original release back in 2012 then there’s no real reason to gallop back into the game once more. However, newcomers will find a rather cool game with excellent characters and a great story to envelope their play time for a number of hours (well over double figures) – and who can really argue over that rather attractive price tag for what you’re getting here.