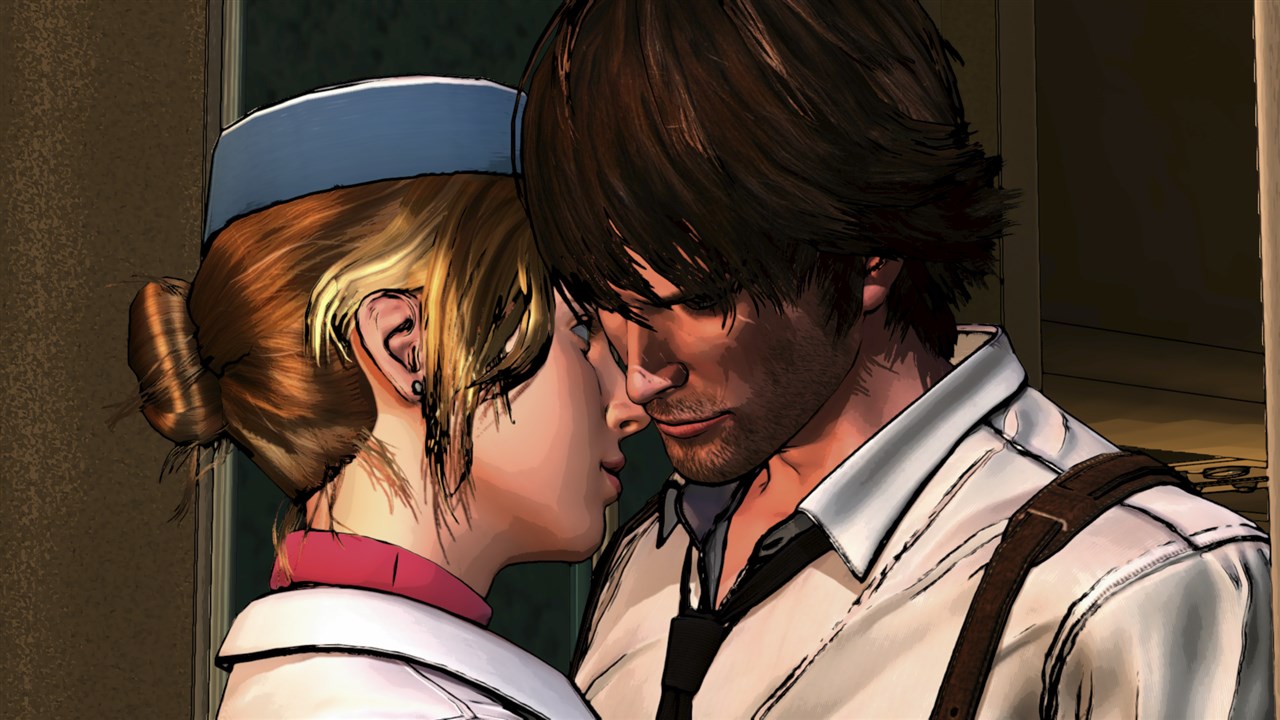 Today we’re taking a look at Access Games’ Xbox One exclusive and Kinect enabled D4 Dark Dreams Don’t Die which tells the story of supernatural time bending detective David Young and his quest to find the identity of his wife’s killer. He’s given some clues from an old friend which leads him to the letter ‘D’ and thus begins the wonderful journey into the past in an attempt to prevent the wrongs from ever occurring. It’s a cheesy story that doesn’t reach any notable conclusion due to the game being episodic, yet the cliff hanger ending only offers a lead rather than closure for the episode. Before then, players can work their way through an introductory prologue, episode 1 and episode 2 which offer equal amounts of jarring and obtuse conversations fused with basic interactive elements and over the top quick time events. Players can spend their time moving freely around enclosed areas, which in this case is set within the confines of a passenger jet flying from coast to coast over the USA. The game does a fine job of keeping the player involved amongst its many cut scenes such as performing simple swipes if using Kinect, voice commands and gestures to mimic David’s actions. It works well whether using a controller or kinect, but has to be stated that there’s very much a disconnect when using a controller as this game is clearly designed with Kinect use in mind. That said, the game is well playable with either method of control, but does actually feel much better with Kinect this time – a claim that actually holds true for once.

It’s perhaps hard to go into too many details about this game due to the fact that it really needs to be experienced first hand. You’ll either get the nonsensical dialogue, odd characters and story progression or be turned off entirely left confused and not really sure what the point is. But the saving grace here is when players gain control of David and can interact with objects, look for items and rank up by gaining lots of cash. There’s a bit of challenge thrown in where every action uses stamina and means players have to make sure to keep it well topped up before inquisitive poking gets the better of you – and can mean game over too. But this is rather easy to overcome with careful warping back home when things get scarce on the passenger jet.

In terms of looks, D4 opts for a popular animated look which works well although if there’s one big complaint and that’s the lack of variety in the locations. David visits his home, the passenger jet, a frozen lake and that’s it which feels a bit confined overall. With the obvious imaginations at work here with the characterization, it’s somewhat disappointing to roam tiny game play areas that become a bit dull after so many hours of rummaging through them. However, the characters are fairly interesting and the obvious showcase here, but the game just feels like there’s too much riding on future content to flesh things out a little more making what’s on offer feel very much like an introduction to greater things.

D4 offers several hours of play with the choice to drift through the story solving puzzles and piecing together the evidence, and spending time investigating everything in each area and exhausting every conversation arc. There’s a lot to miss if simply playing through the basics and with a score board post episode means there’s always room for improvement, especially during the excellently implemented quick time events. Players can expect up to five hours playtime if they are thorough which calls into question the value for money for a game costing £15 which isn’t bad. There’s choice of replay, collectibles to find and unlockable outfits to purchase for all the cast which adds more to do for completionists. Sadly a random bug which halts progress can rear its ugly head for some players which seems to corrupt the save file and require deletion from the Xbox One cloud and console. The error occurs between the first and second episode and is a bit of a pain that it exists in the first place as all progress is lost. Hopefully this will be patched soon.

D4 Dark Dreams Don’t Die is a fun game that offers a variety of crazy moments that really puts the Kinect to good use making it much better than using a regular controller. However, as a game, D4 is rather awkward and somewhat slow moving at times with its long dialogue scenes and moments of inactivity. It presents a situational story in the loosest sense and whilst there’s an underlying goal of finding the killer D, it’s somewhat lost in all the banter and activities thrown at you at every moment. In this regard, it’s going to be hit and miss whether you enjoy the game, as it’s certainly an acquired taste. However, the interactive elements can be enjoyed by anyone and as they are so well done here.