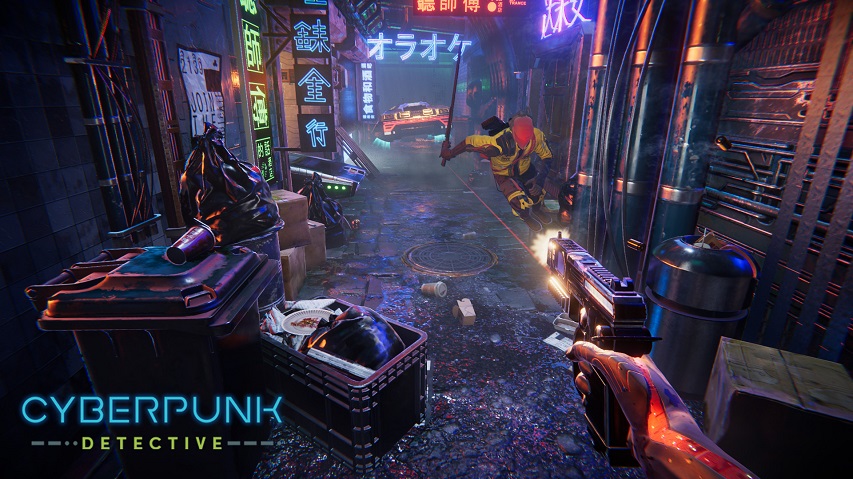 A new cyberpunk themed game in the works from developer CyberPsychos under Playway S.A. In this game you explore the city and solve crimes or prevent them. Take a look at the trailer and get more details from STEAM.

-Explore the cyberpunk city and traipse through its streets
-Make enhancements to your body
-Choose and accept the commissions
-Collect the money
-Solve the puzzles and crimes
-Fight and survive the fusillades
-Come across the Mob and get out alive
-Try to stop the crimes
-Admire the realistic graphic
-Establish a romantic relationship… or don’t
-Drink&walk&stare into the rainy sky. But don’t forget to watch your back!

Enter the cyberpunk City that buzzes with the technology. Walk through the alleys barely lit by the light of neon. Solve the mysteries that cast a shadow upon the innocents, and collect the transfer when the job is done. You say that it’s dirty money? I say – it doesn’t matter in this city of sin.
Feel the noir atmosphere and let yourself sink into this world of beauty and bestiality.

Rain is drumming on the roof. Your pitiful apartment is filled with pungency of decay and misery. You may try to get dressed, but you will only find one semi-white shirt, a pair of not-so-new shoes and a tattered tie. Nevertheless, inspecting the room can provide you with many intriguing details such as the empty glass lying on the table adjacent to the window. It is still smelling of whiskey and if you lift it up, the round stain will remain on the wood.
Always try to move objects and ferret through the stuff – the clues may be hidden right under your nose!

Markets, suspicious shops and dark corners stinking with sewage. All of these are crawling with drug dealers, hookers, cyber gangs and young hackers. Walk by them or interact with them as you traipse through the city. Either way, all roads lead back to the familiar, eye-catching neon. It’s always nice to spend some time in a pub, drinking to the point that you no longer remember about this wicked town.
While strolling, don’t forget to look into every nook and cranny of the City, even if it doesn’t seem plausible. You don’t want to miss a hidden opportunity!

Life is filled with serendipity. How else could you explain waking up next to the beautiful woman covered only in sheets, combined with fact that she’s just given you the commission? How did you ended up here? And does it even matter? The only thing you have to chew on is this woman’s tragic story. It is filled with love, affair, money, abuse – and is just like the ones you’ve heard before.
Choose the job and mystery that appeals to you! Hear the stories of the people and get to know them better.

The feeble scent of the woman’s perfumes is still palpable on your stained, old shirt. Are you going accept her commission, or will you resist those large, mournful eyes? You have to remember that the amiable intentions are one thing, but another are high-stakes – people can offer you really good money. If you agree, then the only thing left to do is to start the investigation!
Solve the mysteries and watch all pieces of puzzle fall into the place.

Some things should remain unspoken. The corruption, murder, prosthesis’ dark market – these are the foundation of this heinous city. Nevertheless, you are dead set on finding the suspect. You have to question them all – the kingpins with sordid intentions as well as the vagrants that were in the wrong place in the wrong time.
Interrogate and collect the facts. That’s the only way to learn the truth!

You may be lured into the traps! Find cover from the fusillade of bullets and deftly escape from the bad guys. Combat is unavoidable, but you have to be wise. There are many enemies and simply not enough ammunition. You may start to doubt yourself – why were you so diligent to accept the commission? Never mind, now you just have to bring it to an end.
Survive the firing and punish those who deserve it!

Let’s say that you managed to find out who the killer was. Now, all you have to do is to choose whether you want to expose them and collect the remuneration, or let things be. Is this worth messing with the most powerful persons in the city? Will this satiate the blood lust or just make everything worse?
Decide and live with the consequences (…or don’t?). You choices have impact on the game!

This was just a beginning, and there are many more stories just waiting for you in the dark alleys of the City. Evolve from a wreck to a true detective that knows the true and manages to live with it. Stroll through the city, fight the bad guys, romance with beautiful ladies, meet shadowy liaisons and decide whether someone is worthy of your trust. Feel the vibe of this cyberpunk city that never sleeps.
And nor will you, until you solve its mysteries!