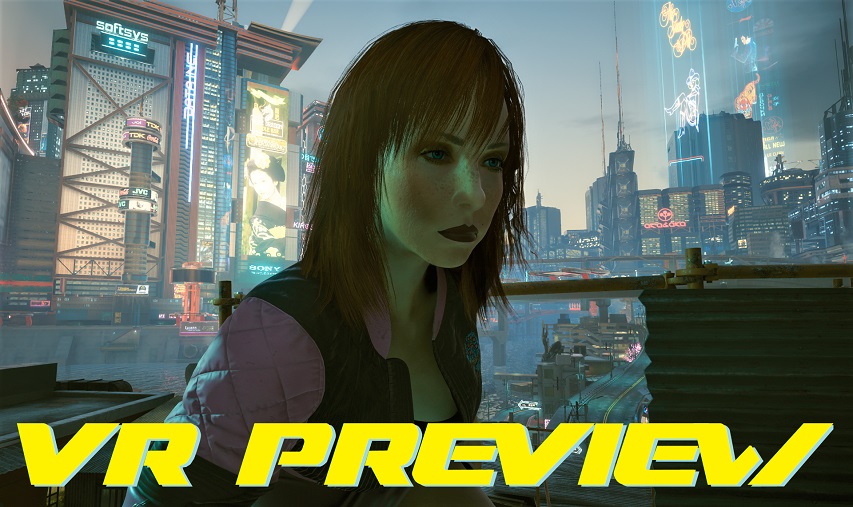 Let’s get this out there right away shall we. A lot of people loved Cyberpunk 2077, ourselves included (see our updated one year later review here). Yet, due to gamer high expectations pre-release, CDPR not being clear on the final offering, a lot of bugs and terrible performance on last gen systems Cyberpunk 2077 received a mixed response from gamers and gaming press alike. However, despite being fans of CDPR’s game, we’re not blind to the fact it could have been better in many ways. One of those is the interaction main character V has with not only the NPCs of Night City, but basic things like side-activities allowing players to feel more immersed in the fantastic world CDPR created. Cue then lots of mods from the PC community where things like a metro system, additional billboards and even gameplay rebalancing have surfaced. However, the latest offering from Ralf (the developer of VorpX) has gotten us all dizzy again. He released a standalone Cyberpunk 2077 VR profile for FREE and we’re very impressed with how it turned-out especially as we tried a VorpX profile early last year where it showed promise but was barely playable. Take a look at our Cyberpunk 2077 VR gameplay impressions to see and hear what we thought of this new offering.

For those not interested in our ramblings in the video, all we can say is using our RTX 3090 driven PC with a HP Reverb G2, this 3D/VR profile makes Night City come alive. We’re in awe at the potential of Night City and although the mod does not provide motion controls like other more recent conversions such as the Resident Evil VR mod, it does allow us to move around and play within the game like any other VR title. This is simply awesome, the 3D depth, the sense of scale and the close-ups with the NPCs. Shooting is handled with head aiming or gamepad and it just feels fantastic however melee combat can look a bit jumbled.

It’s not all rosy though. Whilst the standalone offering means you don’t need the VorpX software, there is some tweaking to be done to suit your system (this is pretty intuitive in-game though). As you might expect, it takes quite a beefy card, to the point where we have lowered the overall settings down to Medium for example, removed motion blur, depth of field, film grain, DLSS and chromatic aberration. Also the screen quality varies depending on how you have configured the profile. We found the perfect settings for us at higher resolutions, but used a letterbox aspect ratio instead of the full VR view. We still felt very immersed in the game world but had top and bottom black borders (which were easy to ignore). The full VR view quality wasn’t as sharp looking to our eyes but gives you the total field of view you might expect from VR.

This is really promising and hopefully when CDPR add some additional content to the game later this year, we’ll see some extras that suit VR even more. There is also a Cyberpunk 2077 VR mod from Lukeross this month hopefully. He uses a different technique. We shall compare and contrast when both are available. It’s a shame there aren’t more developers of these AAA games themselves performing the conversions because we strongly believe once the hardware is affordable and can keep up, AAA games + VR equals the future of gaming. There, we said it!