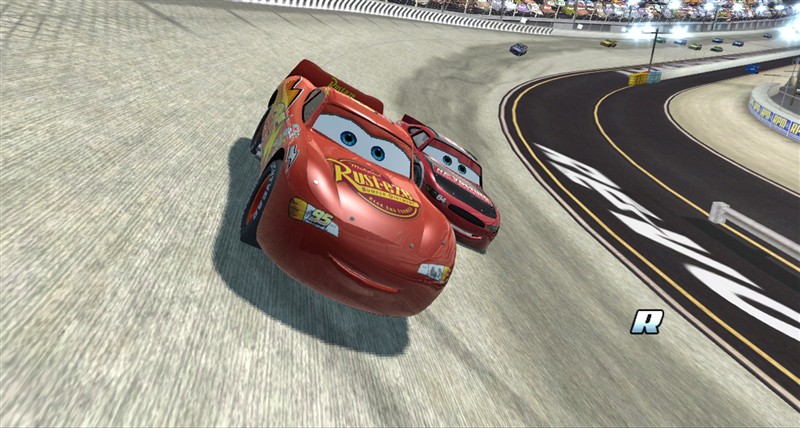 Cars the videogame is based on the Disney Pixar studios latest animated movie of the same name where you take control of leading vehicle Lightning McQueen. Set in an alternate universe where cars, trucks and other vehicles can all talk, have eyes and the will to live independently of any human interference. The game features elements from the movie and to be frank is something that is firmly aimed at the younger audience, and by younger I would say in the 10-14 age group. Yes it’s aimed at kids and yes it’s another movie tie in game; but is it any good and will it keep the young ones well entertained for your money?

Cars presents players with a free-roaming environment to drive around at leisure and within this area are a number of challenges to undertake. Completing these unlocks more areas and awards players with points. The general flavour of the game is competing in one of the major speedway races which require a certain amount of points before they become available. To gather points, players can drive around collecting icons which are scattered across the play area and also drive into markers to initiate one of the sub races or missions. During play, gamers will come face to face with the characters from the movie and so doing sub missions is a perfect way to meet them and undertake whatever task they lay out before you. Each time a mission is activated, players will be presented with a small movie sequence using the game engine and then have the task of either racing, chasing speeding racers, collecting things in a time limit or partaking in a little stealth. Yes, stealth. You might not think that cars are the stealthiest of objects but in the game they certainly can be, especially when combine harvesters are the patrolling guards! The missions are very simple and points are awarded for completion of set objectives to coming in the top three in races. An ongoing challenge is also available which requires players to hunt down twenty postcards that have been blown by the wind across the play area. These are well hidden and require some exploration to find which is a task in itself as some are quite reasonably hidden.

Once players have accumulated enough points to qualify for the speedway races then they can embark on what Lightning McQueen does best, which is Speedway. For those outside of the US, Speedway circuit racing sees vast numbers of tuned racing cars travel around an oval shaped track. The onus on these races is all about position and stamina as there are only two turns per lap. In game the same applies as players need to constantly weave in and out of cars, including ones already overtaken. Taking the best line around the two corners is also paramount to success. These races last around twelve laps and in the middle section of the race, players can pit stop where they are presented with several interactive actions they have to perform to complete. It’s a welcome addition to circuit race and a good opportunity to shave some seconds off your lap time (remembering that the other cars also have to pit stop at least once).

Controlling Lightning and some of the other movie characters is very simple and with arcade handling is easy to pick up and play. For the more advanced player there are things like power-slide moves, jump and turbo boosts which become available as the story progresses. Using these obviously will give competent players an advantage as the AI in most cases gets left way behind once these are mastered. It is nice to see that mostly there is no auto catch up feature, meaning players can feel rewarded for using skill.

The graphics for the most part are bold and bright and with some decent car models that look almost as good as their movie counterparts means that everything will be instantly recognisable if you have seen the film. The play area which is divided into three main zones is relatively small for a free roaming game and features a lot of sparse desert type terrain. The only real place that has much colour is the town in the first area from the game’s opening. The cut-scenes are animated very well and for fans of the movie these will come as welcome snippets to extend the Cars universe. I encountered no slow downs or issues with screen tearing, however I did find that invisible walls posed a problem at times especially when trying to drive over small raised areas. This wasn’t such a big problem but annoying all the same. For an Xbox 360 game don’t expect the raw power to be used as in this respect the game could be seen as under par graphically.

Cars features some standard tunes for its soundtrack including some tune from Los Lobos which has stuck in my head now. It’s all rather typical and I assume some of it featured in the movie. I wouldn’t class any of it to be pumping race tunes and more like Sunday drive music. The voice acting is of high standard and once again I assume features the same talent that provided the voices for the movie. Other sound effects are as you would expect and so overall the sound does its job of provided aural entertainment; just beware of that Los Lobos tune!

Well this is one thing that is rather subjective considering the ages that the game is targeting. For a 10 year old this game could last quite some time and some respects for older people too in regards to collecting all of the hidden postcards. For anyone with decent gaming skills, they will easily be able to beat most if not all of the game in a weekend. With my skills races and missions were pretty much a one time affair as I gathered 1st place on everything in the one go. The only trouble I did have was with the Tractor Tipping stealth mini game and perhaps one moment of cheating AI in one of the speedway races. Either way I think kids will be able to spend plenty of time with this game and feel suitably entertained, especially with the bonus un-lockable cars, movies, artwork and a two player race via split screen. I think the difficulty is perhaps tipped just right for the younger ones; although I’m sure there are several who already posses great gaming skills and will find the game perhaps too easy for them. One point of contention is with the navigation as a handy radar is on screen at all times, although at times a handy waypoint marker would have proved useful especially for younger gamers who might get stuck finding where to go next.

Cars, is an entertaining game and certainly holds true to the movie which will please fans no end. I encountered no real issues other than it was perhaps a little lacking in content, but that’s from an experienced older gamer point of view. Ultimately, Cars is aimed at kids and I think for the younger ones especially there is a lot of fun to be had here especially as it won’t induce fits of rage, tantrums and bouts of controller throwing. For any parent wishing to keep the kids quiet for a few hours then this game most certainly will fit the bill as there are no guns, blood, swearing or sexy babes to cause concern. It’s a fun peace loving game with themes about racing and that’s pretty much it. Is Cars worth a purchase? Well I would say yes for fans of the film or families looking to have some entertainment they can share, especially considering the Xbox 360 lacks games aimed at younger gamers. For anyone else I would say a rental is best and if you are an achievement hunter then the thousand points are well easily attainable in a short space of time. There is a marketplace demo available and so if you want to check out the game first then I recommend you do so.