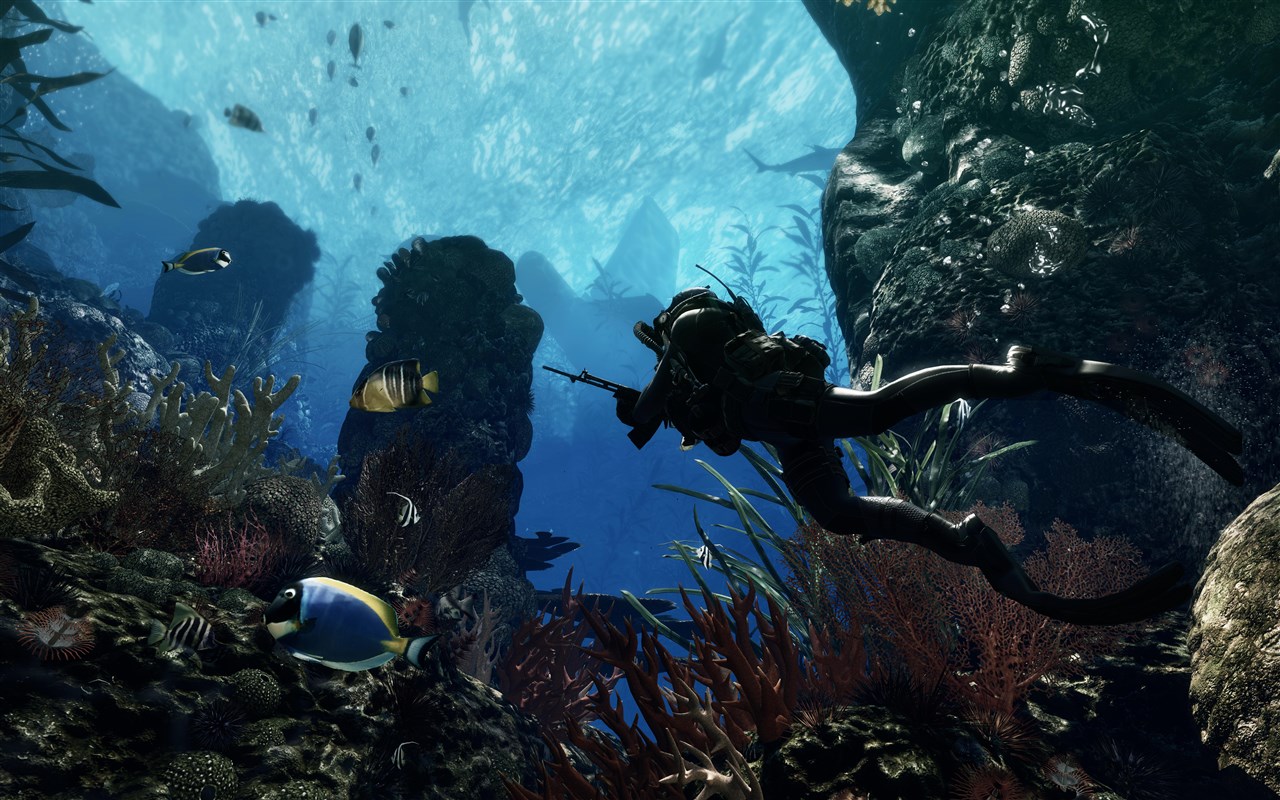 Infinity Ward released some new gameplay footage from their E3 2013 early access, this time showing off the new dog based gameplay and some underwater action. They also released  incredible imagery of their booth at E3 which houses a massive wrap around screen showing off Call of Duty Ghosts gameplay footage.

What’s interesting is the new Dog gameplay which see the dog itself – which has become somewhat of an Internet entity online – get into the action. Now for the first time, we can see how the dog acts in a more covert manner, setting up attacks and using stealth to spot targets. This extra mobility is welcome and makes for some interesting, albeit scripted moments as the dog sneaks through tall grass, tails a target, and then goes in for the take down. Rather than use a mechanical futuristic device for such tasks as we’ve seen in previous games, the dog makes the process feel more personal which is a good thing. The dog is set to represent a more emotive campaign, and having it as part of the focal point of the gameplay makes for what looks like a perfect way to affiliate with dog. It’s unclear how pivotal the dog’s role will be in terms of missions failures, blowing cover by mistake or even if it can die at all but  should make for some varied approaches depending on how Infinity Ward play it – but we shall have to wait and see some other integrations of the feature outside of scripted moments  to get a clearer idea.  How many missions the dog will appear in, is also unclear, but its usage in the level shown felt right and kept players in the game.

There’s more action as the demo plays and concludes, which shows off a more assault orientated approach to rudimentary entry and clear maneuvers. Rather than toss a frag or flash grenade inside a building, the dog can be used as a decoy which is certainly putting the pooch in the firing line. We’re treated to an ensemble of flailing bodies as the carnage unfolds and then as the two man team let rip on the unsuspecting. It’s all very Hollywood scripted as expected from the series and military shooters alike – but it’s commendable  that Infinity Ward are trying something a little different with the gameplay much like Treyarch with Black Ops 2.

The Into the Deep underwater section was a good example of looking at the physics effects of the new revised COD game engine, there are a lot of neat nuances and effects used throughout. Sadly, the gameplay follows the very scripted nature of the series in these sections which feel more like an interactive movie than an actual game. Still, if it’s immersion gamers want, then these sections are full of it.

Into the Deep definitely showcases  the visual element even though we’ve had similar underwater scenes in the last Modern Warfare game. What’s ultimately interesting is the battle will rage in several regions across the globe, hopefully tying together what is a decent script and story.  We expect more to be revealed in the coming days, but it seems Ghosts is shaping up to be a faithful shooter in the long running and yearly series.