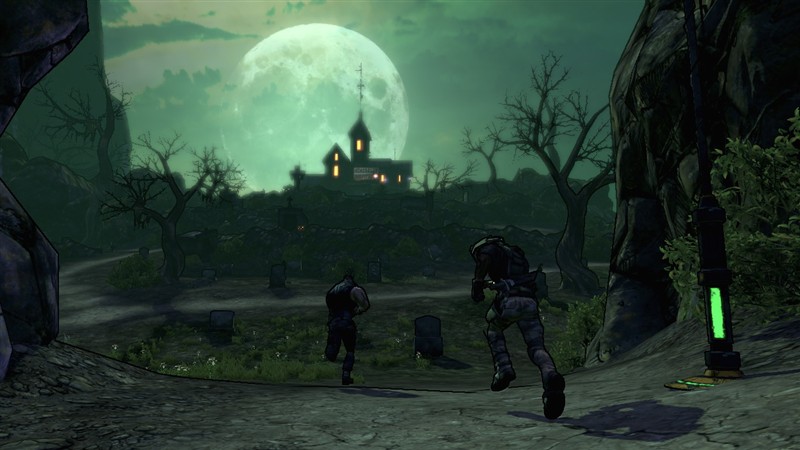 Borderlands is set in the fictitious wastelands of a ravaged planet (Pandora) filled with wild creatures and gangs of thugs looking for a fight. It’s a lawless place and one where people do what they can to survive. There’s a myth that a place exists on the planet called ‘the vault’ and it’s here where there are promises of riches beyond your wildest dreams and so this is where you or your team come in as you enter the world of Borderlands, fighting for survival and hunting down the illusive vault.

Borderlands is a first person shooter which allows gamers the choice to free roam across the lands and do as they please. Well within reason, as what you’re really good at is killing things. So you’re a gun for hire so to speak, a mercenary with a lust for power. You’ve heard the tales of the vault so whilst you embark on finding it, you might as well get paid in the process. The game’s mission structure is based around performing side quests and unlocking more of the main story as you clear out one area to the next. You’ll find an ever present number of enemies who’ll respawn quite frequently and so there’s never a dull moment or the feeling that you’ve cleared everything. In fact venture into one area get to the end and you’ll find more enemies have replaced the ones you’ve just killed as you make your way back. It keeps you on edge and means that there’s always something or someone to point the guns at and fill em up with bullets. There’s good reason for this over abundance of enemies because, other than a few populated areas, the barren lands are filled with cannon fodder of all shapes and sizes, why? Well the game is centered around guns, lots of guns.

The game randomly generates guns and adds various stats to them, meaning there are potentially millions of variations. You’ll get shotguns, pistols, SMGs, Snipers you name it, and what really propels the game is the way in which you acquire them. Basically you’re not only a mercenary but a a grade A scavenger which means find chests (or their futuristic equivalents) and you’ll be privy to some fine loot. With such a diverse random element to the game you’ll never know what you’ll get next, add to that the many weapons which you can scavenge from the fallen and you’ve got a recipe that just whets your gaming appetite. Naturally you’ll want bigger and better guns and so the quest is constant to check the pop up windows which show the stats of the weapon against your currently equipped gun and bingo, take or leave. You can buy guns and other bits and bobs from vending machines, but nothing is more satisfying than shooting up some punk or boss and grabbing the loot free of charge.

As a character of which there are 4 to choose from, each with their own preferred skills and unique combat abilities; you can level up and add points to a skill tree system to help make your life a little bit easier, although enemies scale to your level as well, so don’t expect an easy ride. The skills are pretty basic and generally add stats to your attack and defence with some being unique to your characters special ability.

Aside from running around various locales and interacting with droids and very few humans who don’t instantly open fire on you, you’ll get to drive vehicles which makes getting from A to B much easier, although in some regards you end up missing out on experience and items should you choose to just run over victims. There’s something about the great outdoors in Borderlands that has its appeal…probably those weapons.

The game changed its look half way through development from a more conventional FPS to the cel shaded look we have today and to be frank it works well and generates its own charm. It’s not cute and still retains an element of grit, but does feel more vibrant as a result. The violence is also rather comical as heads get blown off and limbs go flying. It’s welcome and makes the game stand out simply because it deviates from what’s expected.

The game world although largely barren, has enough character to keep you interested and although there are not so many enemy types as there are guns, it does feel alive. The day and night cycle is pleasant and the feeling of being in the open is well realised. The only gripes levelled at the game are the weapons stats windows which can sometimes obscure your view in the heat of battle, and the fact that to pick up items can be a little tedious even though there’s the option to hold down a button to grab more than one item at a time. The whole interface here could have been a little more user friendly. There are also some hit detection issues which can be a little frustrating at times when a head-shot seems to miss completely, but these can be overlooked.

The sound is pretty good and helps thrust the player into the game world. Although the annoying droid claptrap might start to get on your nerves as it sounds like a less cute version of Cid from the animated Ice Age movies. That said, the game does a decent job of offering loud and even louder gun effects and when you’ve got the addition of elemental effects such as fire added to your projectiles then hearing your opponents scream as they charge at you is most welcome. The voice acting as a whole is good and although the characters aren’t the most in depth, they certainly do the job they’ve been tasked to do which is guide you on your journey to find the vault and its treasures.

The game offers a single player game which can be rushed through or tackled at a more leisurely pace. The style of the game is all about levelling as opposed to following the story, so players would do well to relax a little and undertake the many side offerings before charging in to the main course. There’s loads of hours gameplay on offer here and this is extended if you carry on playing once the game is beaten (with tougher enemies to tackle). With the quest to find more loot and rare item drops on going, you could spend a long time in the world without tiring (that’s if you get hooked on finding more stuff).

The game takes on another turn once you add more players into the mix which can be online, system link or via split screen. This is mostly a co-op experience, and once more team mates are added (up to a maximum of 4) the game will tailor the difficulty to suit. Undoubtedly it’s a different experience in multiplayer as the goodies have to be shared, and so some communication is a must. it’s no good teaming up with random players who decide to steal all the good stuff and then leave. You need to build a solid team of trustworthy companions who will not only watch your back but put the greedy tendencies on hold in your presence.

Borderlands isn’t the most complex of games, in fact it’s quite simple as you’re not really interacting much with anything like it somehow feels you should be able to. However the execution in the areas it does well in are well polished and entices gamers who have gaming addictions. The quest for improvement is a good one to adhere to and in this regard the game’s design is well suited to the task. It’s accessible in nature, not too overbearing like some role playing games and generally provides enough action right from the get go to its conclusion. If you’re after a solid shooter that sports quirky graphics, a not too convoluted story and you’re into stats and gun porn, then this is certainly a game which should appeal to you. It’s different without losing the basic appeal and in this regard works well. There is room for improvement though especially in terms of the single player (where’s the AI team mates?) and interface (why no online hub areas for meeting adventurers and more diverse character customisation options?). Still, it’s a valiant effort from Gearbox and certainly a game that stands out from the crowd. If there’s a game to pick up and get addicted to this winter aside from the usual games inbound, then Borderlands should be placed on your shopping list because ultimately it’s fun, rewarding and full of unadulterated to the point action. Isn’t that what gamers want at heart?