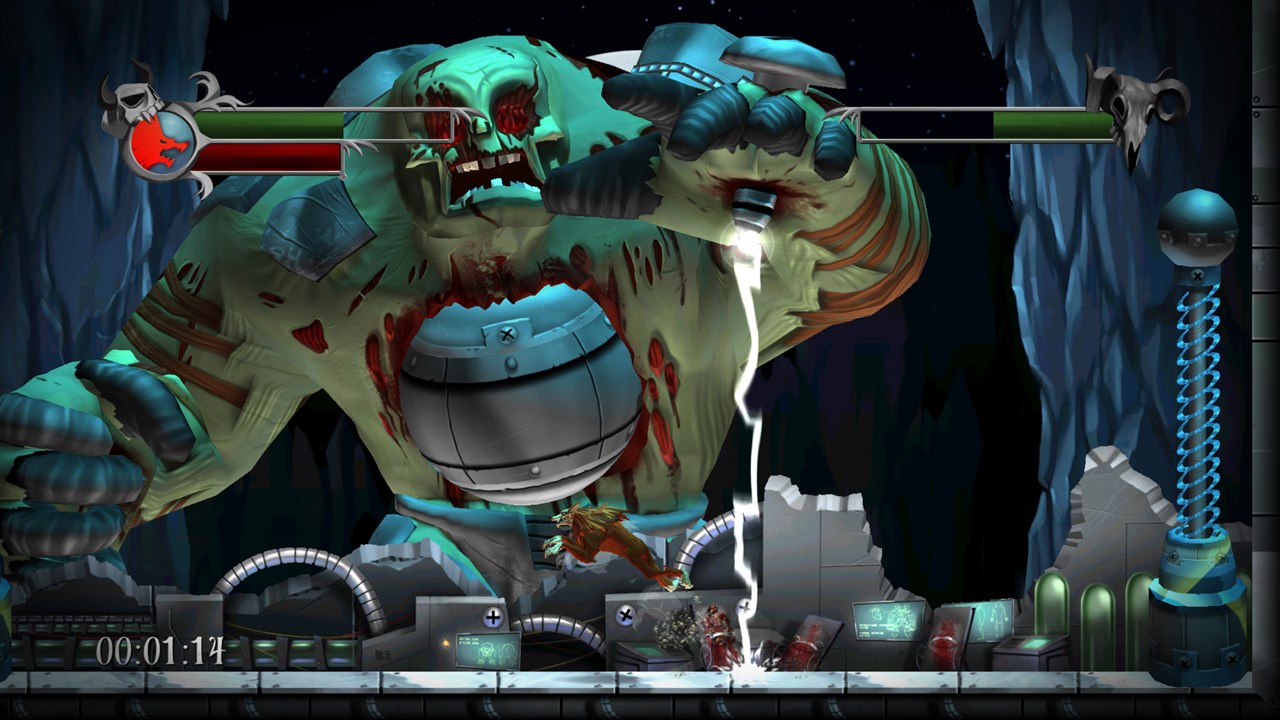 Blood of the Werewolf which is available now via Steam comes from publisher Midnight City and is developed by Scientifically Proven. The game puts players into the shoes of a female werewolf who sets out on a journey to rescue her son. The question is, should you release the £7 price of entry or give it a miss. Take a look at our Blood of the Werewolf video review for the full picture.

Blood of the Werewolf review:

Today we’re taking a look at Scientifically Proven’s indie platforming game Blood of the Werewolf which is available now via Steam for £6.99.  In the game, players assume the role of Selena, a werewolf and mother on a mission to rescue her son after her husband was brutally murdered. It’s a tale of a woman scorned, as she travels across many weird and wonderful levels filled to the brim with all manner of traps and strange mythical beings. Along the way, several key boss characters such as The Mummy, or even Dracula make appearances to slow ones progress, and slow they do with some unnecessarily drawn out encounters. The game presents some instant shape shifting moves into a werewolf when it’s dark, and transforming to a human when it’s light.  There are essentially two styles to play on offer with said boss battles sometimes requiring the use of both forms.

As a werewolf, Selena can double jump,  perform devastating attack moves, and for the astute, there are collectibles which can be discovered in hidden areas that add extra abilities for her wolven form.  As a human, Selena is armed with a bow and is limited to simple jumping and shooting.  The differences are quite stark, although playing with a controller at least, the jumping with the werewolf doesn’t feel quite right and often results in having to reattempt certain sections through poor realization than any lack of skill.

The main onus of the gameplay is simply to get from A to B in the quickest time, but this is hampered by the traps and enemies which litter your way from start to finish. Nothing is too simple, and when you are hit by enemy projectiles or attacks, there’s a knockback animation which can frustratingly push you to your death. The design, is quite rigid in this regard, and if a mistake is made, then starting the last checkpoint becomes a familiar experience.  On a basic level there are some fiendish but manageable areas to navigate, but then the game throws some tough spanners in the works which create some real hair pulling moments. This is perhaps the game’s biggest draw, but also its weakness. On one hand, the challenge is most certainly there  in abundance, and for hardcore gamers, the sense of accomplishment is great when a seemingly impossible area is bested after so many tries. On the other hand, in terms of being an accessible game as a result, it’s perhaps too hard and frustrating, that many will simply give up. There’s no real easing into the tough gameplay either, which leaves players at the start of the game already being dragged and bullied into submission.

Gameplay aside, Blood of the Werewolf sports some pleasant visuals which create a storybook type world filled with the weird and wonderful. Whilst perhaps lacking in animations in many instances and being quite simple, the game doesn’t really draw you into its world due its design. It’s only during  a few odd moments that a sense of scale is achieved, and its here where the game exudes a more vibrant presence.

Audio is pretty solid with voice acting during the cut scenes between each level, and some neat performances for the boss characters. The music tries to take on an old school vibe with a modern twist, offering some pleasing tunes amongst some that begin to grate – especially when attempting the same area over and over again.

Blood of the Werewolf offers a fairly lengthy campaign, but this is mostly due to dying frequently and having to restart checkpoints.  Some are quite widely spaced and will leave you chomping at the bit and perhaps a little red faced. Controller throwing is entirely optional. Players can adhere to leaderboards and compare their times with friends or those who perfect the game – or cheat. With the game offering plenty of close encounters and many moments where you barely scrape through, replaying each level with the aim of a smooth run will certainly take a bit of practice and leaves you on edge every time you play.

To conclude, Blood of the Werewolf is a decent game and worthy of  your time and money if you love to be challenged and punished in equal measure. Whilst there’s nothing really to dislike about the game aside from some cheap deaths, the game’s greatest challenge is being appealing to the wider audience. As it stands, the game’s steep learning curve and numerous retries, will turn some people off and in this regard lets the game down. A more natural progression of difficulty would have really benefited here. That said, for the asking price, the game is worth it and should be tried by anyone who likes a bit of old school platforming adventure.