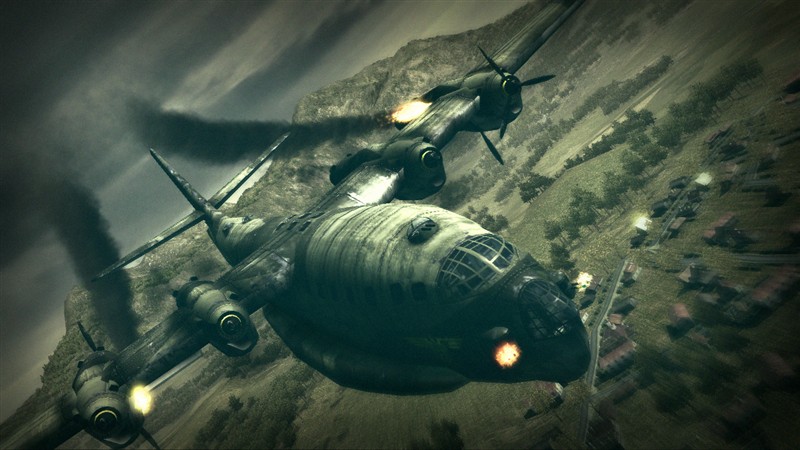 The first Blazing Angels offered us an arcade like approach to what many would consider a boring genre which simply involves chasing squares on an empty screen and waiting for a lock on. Well considering the series is set during World War II when no such technology was used in the field, Blazing Angels allowed us to get back to basics when it came to aerial combat – you know with rockets and guns at close range. This was actually a breath of fresh air and whilst the arcade approach lent itself well to the game, it was still quite basic and fairly easy to master.

Well that was last year and this year Ubisoft Romania has brought us a sequel which this time focuses on the secret missions of World War II. The onus is on the development of secret weapons using new technology and the fact that allied forces sent in a secret team to try and stop the development of such weapons. As you know Jet Aircraft were developed during the latter portion of the war but weren’t actually used, as the war ended before they were fully operational. I’m not sure how historically accurate the game is but in some respects there is some artistic licence thrown in for good measure.

Blazing Angels II plays pretty much the same as the first game and with two control methods being available means that players can opt to stick with the more arcade like control scheme or go for the slightly more realistic simulation settings. Controlling the various craft is a breeze and not something you are going to be struggling with especially as the lock on camera makes a welcome return. The lock on camera allows you to remain focused on your target whilst giving you the chance to line up your craft for the shot. It works really well for the most part although at times can cause some disorientation. Some self control is certainly needed especially when flying low or in built up areas where the camera lock on can sometime cause a death inducing crash into a building (because you weren’t looking where you was going).

The various craft are representations of real aircraft from the period and all have their own flying characteristics so you’ll get to fly attack craft to more multi purpose machines like bombers. There’s quite a variety and what is nice is being able to choose from a selection of craft prior to the mission rather than only being offered one. The weapons can also be selected to suit your tastes so if you favour rockets instead of cannons then by all means you are able to change them.

The missions themselves feel quite varied even though the game follows the usual formula of protect, bomb and attack missions that we come to expect from these games. The inclusion of a little more personality to proceedings in the form of a more cohesive story is welcome and so this certainly makes things far more interesting.

So what is new in Blazing Angels 2? Well, for starters this time you earn prestige points for completing mission objectives as well as for various kills you make. What is more there is a multiplier for more points if you can string kills together. This adds an incentive to do well as the points can then be used to upgrade various facets of your aircraft, such as aerodynamics to things like upgraded weapons between missions. There are even upgrades for making your wingmen more efficient. Talking of wingmen, this time they are back in force and in my opinion a lot handier than before. Not only do they have a little more personality this time they also can be ordered to help you out when needed (using the d-pad) using their own special abilities such as drawing fire away from you or going on an all out attack.

Other new additions to the game are defensive moves which enable you to use blinding flashes to make tailing opponents crash or things like smoke which blankets their vision. One of the more interesting defensive items is a tesla charge (electricity bolt) which although a bit far fetched works well within the parameters of the game.

Graphically Blazing Angels 2 looks decent enough although nothing mind blowing especially when games such as Ace Combat 6 are boasting photo realistic environments. That said, there is a lot of ground detail with buildings and other features adorning the landscapes. However some of the levels are rather bland and although through the game we get to visit many locations across the globe including San Francisco, The Himalayas and even Egypt there does seem to be a lack of something to make the game have more of a visual impact. The modelling for the aircraft is rather good and of course the dramatic lock on camera provides some rather impressive dog fighting scenes. Flying Fans moaned at the lack of a cockpit view in the first game and it’s good to see its inclusion here. The graphic novel type cut scenes between missions are also well done and worthy of mention here as they certainly add to the overall experience.

On a negative I did notice some horrid aircraft animations at times where planes would switch course in a jerky movement rather than smoothly. There were also some minor issues with screen tearing (lines across the screen) although these were not frequent. My other real gripe were with moments of slowdown where things would momentarily grind to a snails pace when too much was happening at once. Overall these moments didn’t happen often and hardly hampered my playing experience.

The sound in game is pretty standard fare although the voice over performances whilst typical were still pretty good overall. The sound effects are as you would expect with some nice engine sounds for the aircraft especially when performing tight bombing turns. There’s a lot of radio chatter during missions and as you can expect things do get a little hectic at times what with the music, sound effects and voices all playing at once. For me, the music was the least memorable aspect of the sound with some standard orchestral pieces being used that acted as background noise rather than putting me into the moment like it should do.

Blazing Angels 2 can be completed quite quickly if you play all 18 missions back to back. However if you can’t spend hours upon hours playing games then it should take a reasonable length of time to finish them all. The real replay value here is gaining the Ace rating for each mission which in turn unlocks more aircraft to use. Yes, you can replay missions you’ve already completed and so gaining the highest accolade should pose not too much of a problem – especially considering the requirement seems much easier this time round.

There’s also some multiplayer madness for local, system link and Xbox Live play and it’s here where players can team up and play adversarial modes as well as co-op skirmish missions and campaign. There’s a lot to keep you going here after the campaign has been exhausted in single player as the split screen local play is most welcome in this day and age of online focused games.

Blazing Angels 2 isn’t a departure from the original game in that they play pretty much the same. The added features and tweaks in Blazing Angels 2 most certainly make it an improvement and therefore worthy of a play, if you like flying games. There’s very little to fault with the game as it seems to tick all the required boxes for a game of this sort despite the few graphical hiccups I encountered during my play time. Sadly there really is a lack of ambition in the game and it’s not going to be remembered for anything other than providing a typical aerial combat experience. This isn’t particularly bad just a shame that the developers couldn’t have injected a little more “oomph”.

If you’ve not played a flying game before and have the impression that they are mind numbingly boring with added beeping then perhaps the arcade antics of Blazing Angels 2 could sway you. I recommend this game to anyone with an interest in flying games and obviously those who don’t should either rent first or try the marketplace demo. Although I must say there’s a lot more variety than the demo suggests.