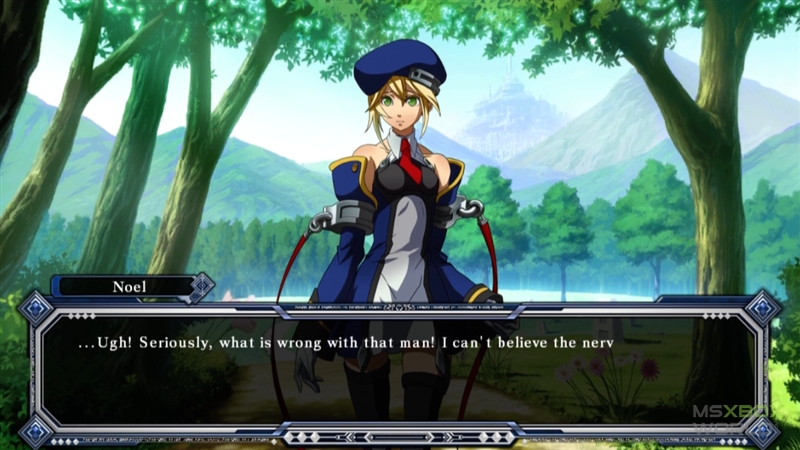 Developed by Arc System Works Blazblue Continuum Shift is the latest game in the relatively new series stemming from Japan. Calamity Trigger released in the west in 2009 and so to see another game a year later is great for fans of the fledgling series. The team at Arc were responsible for the more well known Guilty Gear fighting games and the recent Battle Fantasia. Featuring colourful old school 2D graphics, how well does Continuum Shift stack up against the 3D kings such as Vf5, Tekken 6 and Super Street Fighter IV and more importantly Arc’s other 2D Games.

A look at the main menu and you’re presented with various modes of play including a very extensive but long winded tutorial sitting atop of the list with a glowing pride. The reality is, if you’re to get the most out of the game then learning the hidden nuances to make your fighter all the more accomplished is key to success. There’s a lot more to the game than merely pressing the face buttons on the controller and performing simple combos – which you may not instantly notice if you jump right into the fight blind. You’ll possibly be patronised by your teacher during the training, but this is designed to be an accommodating lesson, so that complete newbies can learn the most basic of basics.

There’s a new Beginner option for those who really do just want to tap the buttons with less thought, but due to the relative simplicity of some basic moves, it is more rewarding to learn how to play properly.

If you’re the confident sort, or had enough of being lectured then the traditional Arcade mode is a worthy place to start your ventures, although if some real practice is essential to your plans there is a training mode where you can fight a dummy opponent and hone your skills.

There are some underlying themes with the story and characters which make themselves known as two opponents face-off; and so making a return to compliment the Arcade mode is the Story mode. Here you choose a character and once a section of their story is complete, another path with a new character is open to you. The stories intertwine and can offer a lot more depth to the characters on offer, however the presentation is pretty simple here, and you’ll be faced with lengthy conversations with some offering much about nothing.

Aside from the usual playing fields of versus for 2 players or versus the AI, there are a couple of extra modes to dip in and out of. The Challenge mode offers some intense additional training for your finger tips as you choose a character and perform various complex actions. The more interesting Legion mode has you fighting for supremacy on a board of sorts, but in truth is more like an extended Team Battle mode.

Whatever mode you decide to spend time on, the gameplay remains very solid with not too many moves to memorize per character, and ones that are easy to input initially and harder to get flashy and perform more complex combos. As with any fighter there are potentially days, weeks and even months of learning involved, and with 14 very different characters to choose from offers enough variation to keep things sweet. Novices can bash away with the new beginner mode and feel like they are making progress even against the boss characters who are a lot less powered than the last game. Whereas pros can up the difficulty and be truly tested against some remarkably adequate AI.

The game fuses meticulously designed 2D characters with spectacular 3D backgrounds, creating a lively and busy looking game. The menus do look on the dated side, but serve their purposes well enough. Character movement and those all important animations are spot on and will have you jumping around the screen with glee. There’s really little to fault here overall.

The audio features the original Japanese dialogue for the purists, but also English dubs for those not wanting to read the subtitles. Sadly there’s few FMVs but the story mode in particular will present plenty of talking. The oddball characters all have their individual quirks, and there are some definite laugh out loud moments for those who pay attention and endure rather than skip straight to the action. The game’s spot effects are all functional but the rock inspired music is very much an acquired taste.

With all that’s on offer there’s enough to satisfy the lone or local gamers. However, take the fight online and you’ll find some skilled opponents to face-off against. The community might not be as active as SSFIV but pick the right moments and you’ll find suitable challenges around every corner.

Continuum Shift might seemingly pale in comparison to the Tekkens and Street Fighters of this generation in terms of realistic and 3D looks, but as a 2D fighting game it certainly delivers a ballsy well rounded and expertly crafted experience. Its accessibility is very much one of the game’s biggest strengths and whether you’re new or well versed there’s something suited to all players. It’s hard to not like the characters on offer, because if you do delve beneath the surface you’ll encounter the wacky and the wonderful. There’s plenty of cliché, but that doesn’t stop the game delivering a ride worth taking although a few more modes could have been included. With fewer new 2D fighters on the market it’s great to upturn the stone that Arc have laid to find a classic 2D brawler in the making. Highly recommended if you enjoy fighting games.