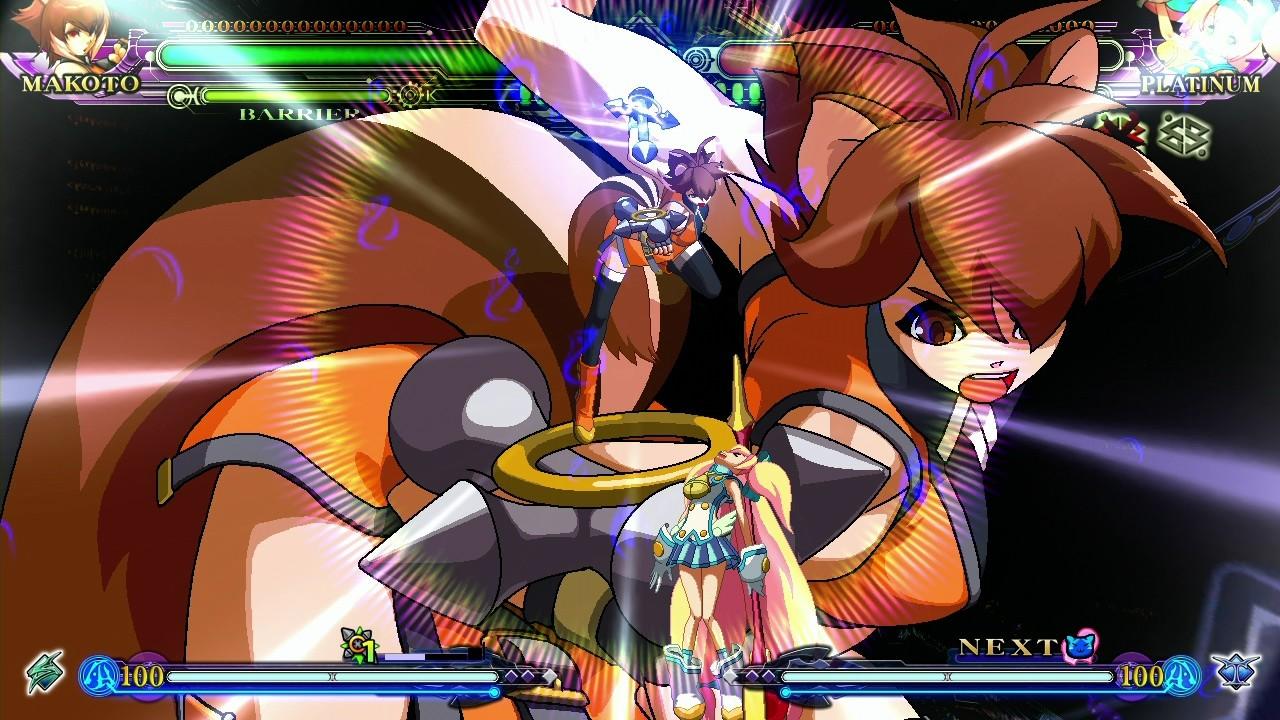 Arc System Works are one of the few developers clinging on to the now ancient art of providing gamers with old school 2D fighting games especially in times when the more established franchises like Street Fighter and Mortal Kombat have gone fully 3D. There’s a certain charm with 2D hand drawn characters that you can’t recreate using polygons, and so it’s welcome and refreshing to see that King of Fighters isn’t the only franchise remaining firmly in its 2D roots. Blazblue Continuum Shift launched on the back of Calamity Trigger and much like Capcom who rebooted its Street Fighter game with newer iterations the same is being done here. What this effectively means is, newcomers get the best deal, and fans who may already own the previous games might have to bite the bullet and trade the old for the new to get access to the new features on offer. Cue, Blazblue Continuum Shift Extend, a revised version of Continuum Shift but with a whole bevy of new content. Rather than talk specifically about the basic fighting game which remains largely unchanged bar of few tweaks here and there, we’ll look at what’s new and whether the package is worth forking out more money for if you’ve already gotten the original.

To begin, Extend features a new and improved story mode and what really sweetens the deal aside from some new anime cut scenes is the fact that the entire Calamity Trigger story is included as well. Make no mistake, playing through the text heavy and hilariously voiced story can take several hours and is well worth it to get the basics of what, when, and why. The Continuum Shift individual stories are also on offer in their full glory and feature new additions in the form of Sector Seven and Military Academy which need to be unlocked through regular progression of the other characters stories first. Including Calamity Trigger there are 22 story options on offer which is simply an awesome amount of single player content that really places you into the heart of each combatant. In addition there’s the Teach me Litchi story as well adding more whacky fun and games to proceedings. To make things a bit easier for newcomers, the stories can be played using the Stylish Type mode which is toggled on or off at the main menu and allows for flamboyant combos from simple button presses. If you’ve played Continuum Shift then you’ll be familiar with the presentation of each character’s story, but sadly you’ll have to replay them again as the game won’t use the same save progression from the previous games. Perhaps a complaint that has to be levelled at all the stories is the fact that you have to continually press a button to advance the voices/text. Having an auto option would have meant being able to sit back and watch.

Extend doesn’t just go all out with the story based content as some of the combos and moves have been changed, and what better place to practice or learn those is via the missions in the challenge mode which lets you see them in action and gets you pressing the right buttons to pull them off.You can play as each of the old and DLC characters on offer (a total of 19 characters). In case you were wondering, the new DLC characters include the likes of the rather vixen looking Makoto Nanaya,The small and annoying girl Platinum The Trinity, Rachel Alucard’s man servant Valkenhayn R Hellsing, the ranger looking u=12, and new character Relius Clover.

Once you’ve gained mastery of the new moves and how they work a new survival mode called the Abyss is included and is a great place to test your skills against increasingly difficult foes including boss characters. What’s neat is being able to level up your character between rounds to increase things like speed and strength, but you lose all upgrades should you fail. An interesting feature is having fights get interrupted by other combatants (CPU not human) but can get annoying if you’re suitably dishing out punishment only to have the match come to a halt. The general idea of the Abyss is to reach the lower floors in this mode from 100 floor intervals. It’s probably my favourite addition to the game as the RPG style elements make for entertaining gameplay.

The final mode and new addition aside from the online team battles which allow for 3 vs 3, 2 vs 2 etc. matchups is the Unlimitedmars mode which has you facing off against “ultimate” versions of characters. Unlike the standard score attack, these are extremely tough to beat, and means that you need to be a Blazblue god to stand any sort of chance. If you’re not, then prepare to be humiliated over, and over again.

To conclude, Blazblue Continuum Shift Extend is filled to brim with colourful features and additions, and if you’re a fan then this is the definitive version to own as it’s got it all. If you’re a newcomer then by all means you might be able to pick up the two other games fairly cheaply now, but then you’d miss out on the extra modes which really do make the package complete. This is generally a fun game that’s easily accessible for newcomers, and perfectly viable for the pros amongst us. It’s out in early March 2012 and well worth adding to your collection, fighting game fan or not.