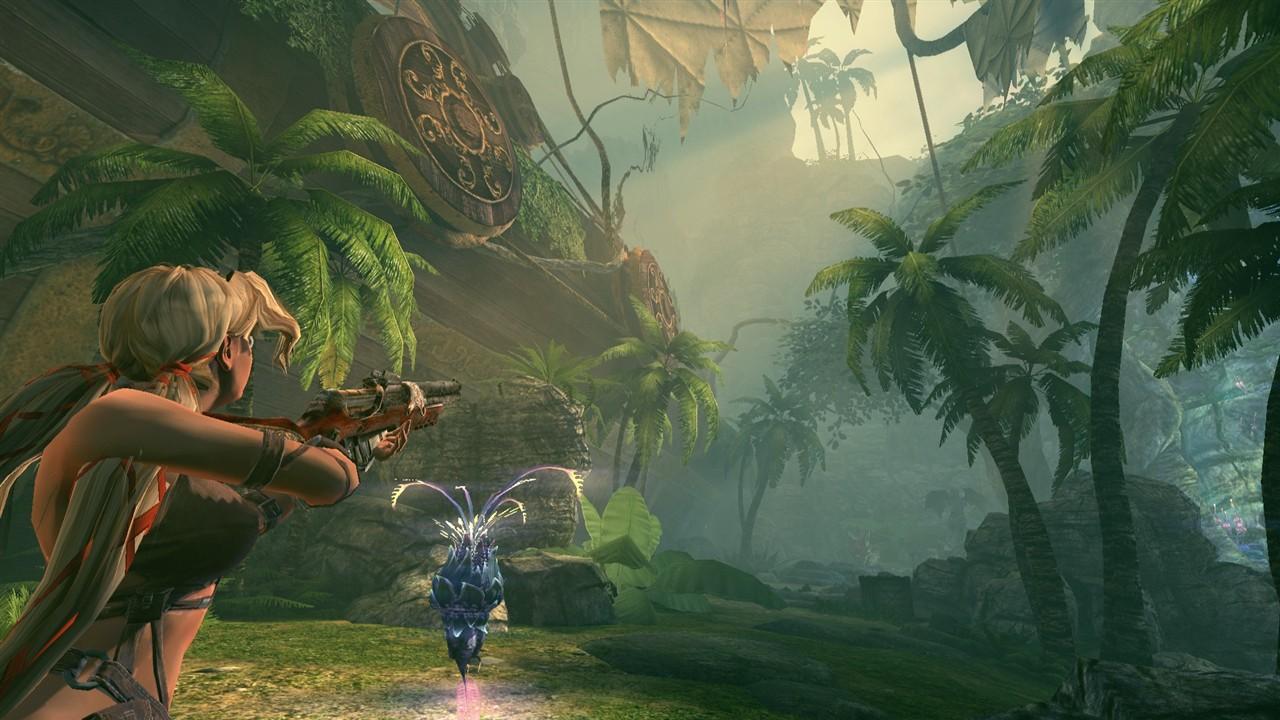 Blades of Time tells the tale of treasure hunter Ayumi as she seeks treasures in a mystical realm called Dragonland. The game has been developed by Gaijin Entertainment, and if Ayumi with her golden pigtails and red bands looks familiar, then you’d be right as she was also the star of Gaijin’s other game X-Blades. Blades of Time could therefore be considered a sequel, and although the game’s looks have gone from anime to more realistic, the hack and slash gameplay remains largely unchanged.

Blades of Time is very much more than its predecessor though, and when it comes to combat, Ayumi has a lot more killer moves at her disposal. She’s able to perform many more combos, but also several magic based attacks which she unlocks as she gathers souls via killing the game’s weird and wonderful enemies – which range from altered beasts to human. Ayumi’s special attacks are unleashed as she builds up a meter, which is tiered, and as you progress through the story, more powerful attacks are unlocked which require the meter to be filled a lot more. The trade off is delayed specials, but more powerful and impressive looking moves.

Ayumi’s main additional power unique to this game is her ability to rewind time to create a double of herself. This can be activated at any time as long as her gauge is filled, and makes solving the many puzzles a breeze – once you’ve worked things out. There are also enemy types and bosses which require her to tactically use her time abilities to get the drop on them. Some of the bosses are a bit vague, but once you’ve nailed the correct process they do drop fairly easily.

For the most part, the gameplay is pretty solid but there’s a real lack of impact when Ayumi strikes out at enemies. A bit of rumble on the pad, or better enemy reactions would have improved this. She also has access to weapons such as a rifle and machine gun (with infinite ammo) which add another slice to the gameplay – targeting ranged enemies but seems pretty weak against ground foes. Some enemies do get frustrating at times, and with the game’s use of pressing the d-pad to heal Ayumi, does result in more deaths than necessary. This could have easily been an automatic feature rather than requiring player input, especially in the thick of battle.

Ayumi gets to travel through various stages which can be replayed over and over, to collect hidden treasure and books. What’s neat is a compass which can be brought up at any time pointing in the direction of where she needs to go, and even highlights where hidden treasures are. There’s a varied mix on offer of combat, exploration and puzzle solving, and as she gains more moves the game opens up a bit more.

Dragonland is a pretty and varied realm to travel and retains a similar style as seen in X-Blades. There’s lots of colour and decent sense of scale. The general animations and design of characters are pretty good, but once you begin to tinker with the slow time, the game screen does tend to get a bit messy with an abundance of red resulting in a loss of clarity of what is actually happening. That said, overall, the game’s looks are pleasing on the eye but lacking in the finer details.

The game’s audio is a mixed bag, and although the British sounding Ayumi has a certain charm, the acting could have been delivered with a bit more gusto. Ayumi comes across as a tenacious killer of man and beast, but her voice and script portray her more like an innocent school girl. The secondary characters, are reasonably voiced, but don’t expect Oscar winning performances from what is quite a basic and non taxing script.The rest of the sound effects such as the music, sword clashes and gunfire is functional rather than standing out.

Blades of Time offers reasonable length campaign which can be replayed on tougher settings. However, there’s also a multiplayer mode which can be played co-op or solo or versus and has you destroying siege points on a map with AI whilst protecting your own. It’s a solid mode even when playing solo, and makes for a health and decent distraction from the main game. With lots to unlock and level here, it’s something that will no doubt eat up the hours beyond the single player story.

Blades of Time is very much an improvement over its predecessor, but in some ways this late in the life of Xbox, let down by a lack of flare. It does what it sets out to do, but is simply missing the polish of bigger budget games within the same genre. If you’re a fan of Ayumi and her exploits then this is a worthy sequel to sink some hours in to, but for anyone else, there are better offerings out there. That said, if you’re looking for something new that has some interesting ideas – like the rewind time feature – solid combat and some varied looks, then you would do well to give the game a chance. Ayumi is no Lara Croft, but she does a fine job of being an alternative.