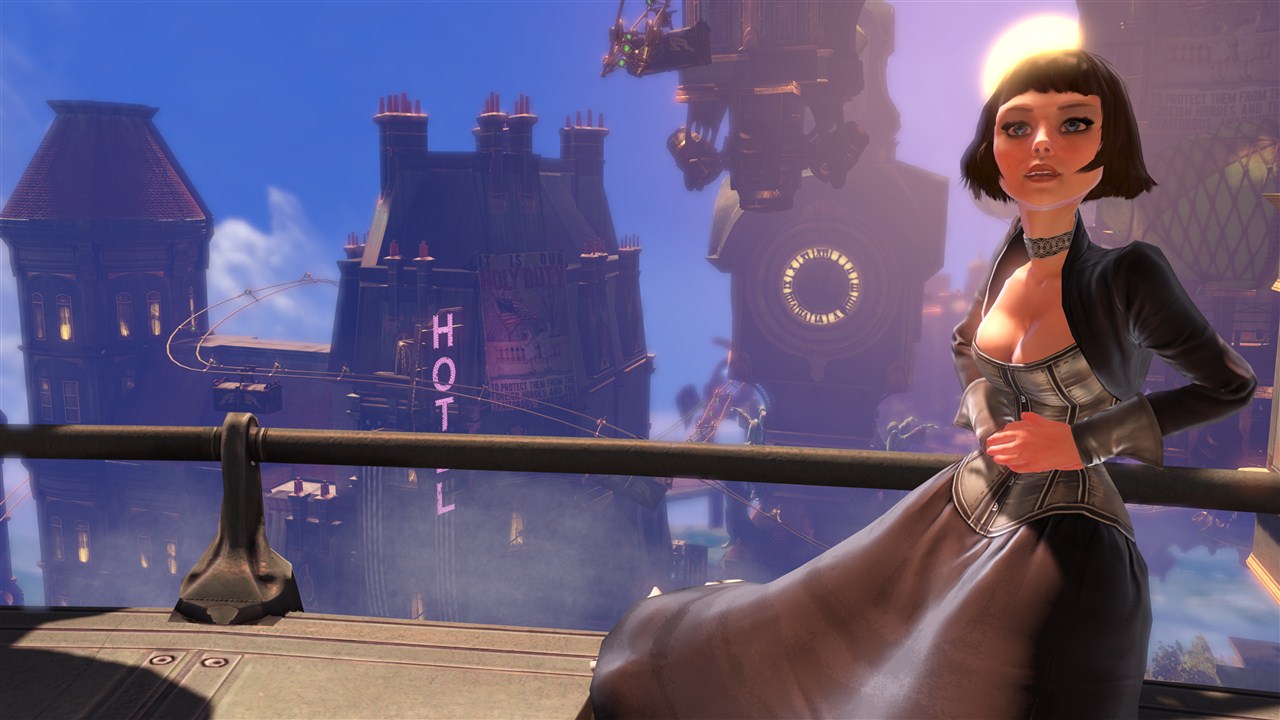 After eagerly playing through the game, here’s our Bioshock Infinite review which gives our opinion on one of this year’s most eagerly anticipated games. Has Irrational Games struck gold with their latest gaming magnus opus?

Today we’re taking a look at Irrational Games’ third current generation outing for their Bioshock series culminating with the aptly named Bioshock Infinite which has seen quite a number of delays since slipping from its 2012 release. The end product sits within a realm of distorted Americanisms and historical happenings coupled with a story about rescue and escape, littered with a hefty slice of no nonsense gunplay. Infinite is a bit of a departure from the confines of the underwater city of Rapture in the previous games, and in a way some of the horrific element takes a back seat in favour of less subtle shirt grabbing moments. The slow methodical creeping around is somewhat absent as players take of the role of Booker Dewitt as he rescues his side kick Elizabeth from the clutches of a stark and heavily stylized air based city of Columbia. It works, but doesn’t feel like the other games which can be seen as a good or bad thing depending on your preferences.

Without going into the plot other than mentioning the premise is quite simplistic until the full revelations of what’s actually happening are revealed in the last half hour or so of the game. Led like a lamb, players can meander in and out of the game with little regard to the overarching tales that accompany the adventures of Booker and Elizabeth and simply get stuck in to the point to point navigation and endless shootouts. The complications of the story merely act as distractions for the simple act of searching through rooms, looting corpses and finding the odd nod at the previous games in the form of vigors (or plasmids as they were called in the previous games). Whilst perhaps not as fun to use, these upgradable powers are useful when the masses of enemies begin to attack – and attack they will. There’s no stealth here, no capping foes from behind, because once one enemy is alerted the whole area simply turns against our hapless duo making for more staged and encumbering battles. Luckily the vigors, and neat selection of weapons and of course the ever helpful enigma that is Elizabeth all play their part in tipping the odds in your favour, and much like the previous games death is never really a problem – something that only gets explained at the end of the game.  That said, the combat is pretty tight verses a range of weird and wonderful human and mechanized opposition who adopt various tactics to keep players on their toes. Whilst fights are more like staged encounters the combat mechanics are fast and well suited to the game’s overall style that will certainly please first person shooter fans.

Bioshock Infinite comes into its own in terms of its visual elements which depict a religious and supremacist theme to suit the 19th century dating of the game. It works well and makes for quite a distinct departure from what gamers are used to despite lacking in some of the more detailed textures seen in more realistic looking games. The bright and bold visual styling really cements the game in its own sphere, and with a touch of steampunk thrown in for good measure creates a fantastical dream like playground to explore and cause havoc in. There’s very little respite for our duo, where when things do settle down make for a welcome break from being constantly assaulted offering time to take in some of  the details which sit more within an animated movie style than gritty realism. The game world is much less claustrophobic than its predecessors, offering a much more open and yet conjoined experience.

The game’s audio element retains a high level of aural painting whether that be from bellowing announcement over loud speakers to the various chatter from the NPCs during a number of scripted moments. However, it’s the constant dialogue between Booker and Elizabeth that becomes the main focus which creates a somewhat believable bond between player and sidekick. Whilst Elizabeth doesn’t need protection per se, the mere fact of rescue creates a nurturing element that’s rarely seen in today’s games, despite the fact that she’s never really at any risk aside from scripted moments in the story.

There’s some clever use of music from time to time to set the mood, and audio files once more can be collected and played on the fly to add a bit more depth to the story, and in some cases a bit of chilling atmosphere.

Irrational Games ditched the multiplayer this time, which is perhaps a good thing, as the single player does weigh in around nine to twelve hours depending on how much time is spent exploring. The game does beckon a second play through, especially with the much touted 1999 mode becoming unlocked once the game is bested and a whole selection of achievements to strive for whether your PC or on console. In this regard, there is certainly players monies worth and with the game pushing players forwards at pace, replaying to take things in a bit more is a welcome option.

Bioshock Infinite is a welcome addition to the series, but in some ways is less classy than the original Bioshock, and somewhat plays quite differently despite some distinct similarities. What is perhaps most notable about the game is the distinctive looks and overt messages contained within to really place players in a utopian world where there’s less horror and more social dysfunction. It’s perhaps more deliberately thought provoking, but in some ways the story can be largely ignored due to the heavy focus on large scale combat. In a way, the game feels less personal as a result but still retains a unique edge due to some fantastic artistic direction and well placed and performed audio both in the music and voice over performances.

If you’re a fan of first person adventuring, then there’s definitely lots to be enjoyed here although the lack of stealth is a bit disappointing as the full on combat can get a little repetitive and predictable at times. However, the game’s progressive style certainly lends itself more to those looking for a more action packed adventure which the game doesn’t shy away from at all. As a game in its own right, it’s big, somewhat clever, and most importantly well worth picking up and playing.