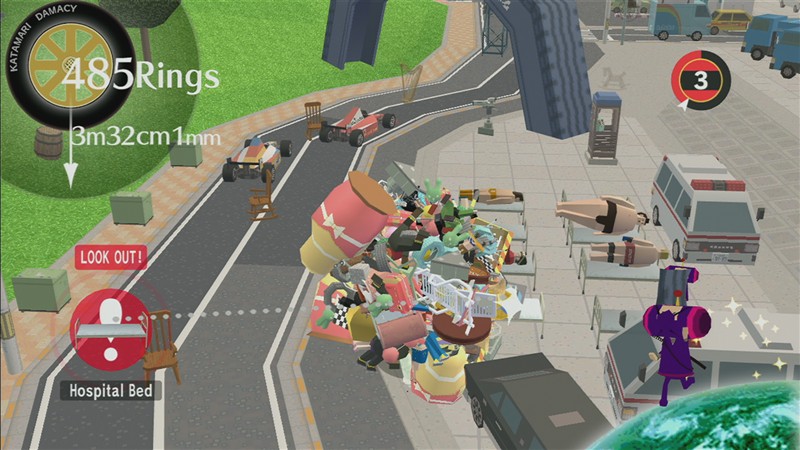 It’s interesting that Atari have brought the rather wacky and sublime Beautiful Katamari to Western shores, and more unusual to Xbox 360. Whilst the game started out in 2004 on PS2, the advantage the PS2 had was a diverse and huge fan base of gamers across the globe. Without trying to undermine the Xbox 360 crowd, it does seem that the system primarily caters to a more action orientated audience, which makes the release of such a strange game feel somewhat confusing. Either way, if you are after something different, then Beautiful katamari offers a gaming experience unlike no other.

The story is pretty simple and completely “far out”. There is a black Hole sucking up parts of the solar system and it’s your job to rebuild the solar system and stop the black hole from causing more problems. As part of a monarchy, you are commanded by a god like king who acts as a tutor and examiner of your skills. To begin, your task is a simple tutorial which highlights the game’s fiddly controls which use the left and right sticks to move. Once your tiny character has entered a level, you are left pushing a Katamari – a ball which picks up objects. As it grows in size, it can pick up bigger objects until eventually it can pick up things like planets and stars!

The idea behind re-creating the planets of our solar system means that each Katamari has to have a certain theme behind it. This means navigating the level and picking up specific object types to suit the planet’s structure. To add more of a challenge, for the most part you are required to reach a minimum Katamari size and within a time limit as well.This can be frustrating to begin with, but once you master the controls and don’t waste time bumping into objects too big for your Katamari it becomes a fairly simple process.

Basically, you push the Katamari over objects and it picks them up, like a snowball being rolled through snow. However you’ll be picking up every object in sight, including cats, cars, monkeys, space shuttle launch pads, people etc etc. The ball becomes a huge mass of objects and looks uncanny to say the least. The camera pans out further as your Katamari grows, which gives a unique sense of scale.

Between levels you are able to navigate an open map area and retry previous levels (to obtain a better point score). There are also hidden presents to find and additional characters you can pick up in the levels and use on subsequent plays. On the map area you are also able to check how well you measure up against opponents on the Live network, by viewing leader-boards and such like.

The graphics are very simple, and have not changed much from the PS2 version, although the clarity is much better on the Xbox 360 version. You’ve got very simple details and nothing that shouts out realism in any way shape or form. Beautiful Katamari is a game which revolves around simplicity and the graphics follow suit. I found some annoying issues with the camera when my Katamari was small, in that objects would block my viewpoint, but other than that, the game runs pretty smoothly throughout.

The audio features a heady mix of catchy Japanese pop tunes that will have you tapping your feet with gay abandon, or you’ll want to head to the mute button after about 20 seconds. The rest of the game’s sound is as wacky as you can expect from a game like this, and is functional. What is weird is the King speaks using a record scratching (like a DJ using vinyl and turntable) and this in itself sums up the unusual nature of the game.

Beautiful Katamari is a short game in that you’ll beat the missions fairly quickly, once you get the hang on things. However, there’s certainly incentives to go back and try obtain a higher score, and if you are an achievement hunter, then you’ll have to invest a lot of time here to grab a nice chunk of the points. To add to the single player experience, you can embark on some offline co-op and head to head modes. If you are feeling brave, you can go online and challenge gamers from across the globe. Sadly, you might have to wait a while before finding an opponent, as I said in the beginning, this game is going to have limited appeal to the Xbox 360 audience, so there may not be loads of eager players waiting in lobbies.

Beautiful Katamari is an unusual game, and probably the strangest non XBLA game on the system. I’m not sure who the game is aimed at, but primarily the game’s puzzle element is what makes it a captivating experience. However, unusual doesn’t necessarily make a game any good, and from where I’m standing the game is borderline. I can see that some fans will gain enjoyment, and those gamers tired of the norm, but for my tastes, the appeal of the game was lost pretty early on. I have no compulsion to go back and play the game again, not even for fun. I’m glad I’ve experienced such an unusual game, but when all is said and done, there’s something memorable here, but for the wrong reasons. I’m not left in awe or inspired by the game, just glad that I beat the levels and can move on to a more traditional gaming experience. In this respect, Beautiful Katamari has failed to capture my imagination, and I suspect for the majority of gamers, they would have similar feelings. Therefore I can only suggest a rental here, but who knows, you might get pulled in and feel like making a purchase after playing the full game.