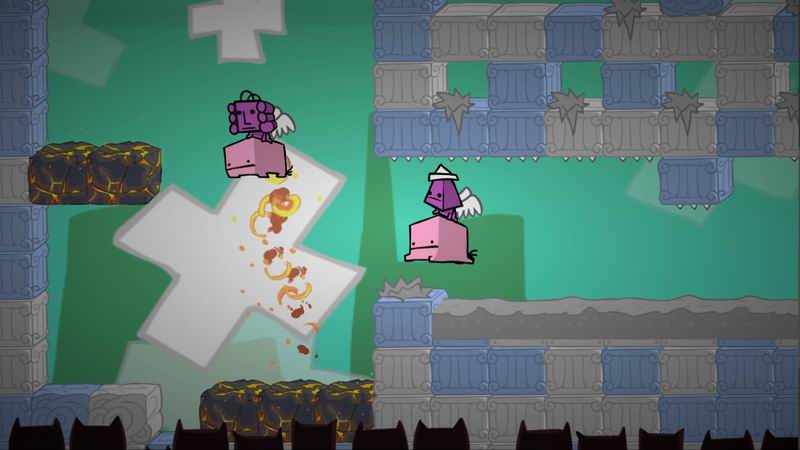 The Behemoth has been responsible for some pretty great games on the Xbox Live Arcade, with Castle Crashers arguably being the most popular one. The frantic, fun, four player beat-em-up romp was both accessible and deep, giving newbies and veterans something to enjoy together on the couch or across continents via Xbox Live. Their newest offering, BattleBlock Theater, maintains that same, strong co-op focus, but as a platformer instead of a brawler, can it maintain that same level of quality? Yes, as it turns out, and it might just be the best game that The Behemoth has given us yet. 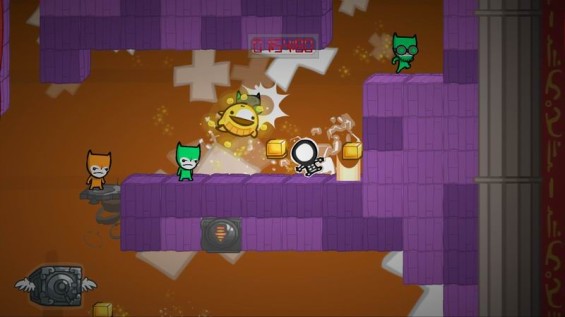 While gameplay is ultimately everything, the first thing BBT did to grab me was actually showing off its inclusion of voiced narration, something that was missing from The Behemoth’s previous releases. While its absence never hurt their past games, its inclusion in BattleBlock makes a fun game downright hilarious. The quirky, 2D art, simplistically exaggerated character models, and charm of Behemoth’s signature style are all there, and while they again go a long way in giving the game its fantastic personality and darkly whacky tone, nothing sells the game like its phenomenal narration. I was literally laughing out loud during the opening video, and the narrator’s fine work continues through each level.

As he explains the direness of your being captured by maniacal cat overlords and forced to perform in “scenes” for their amusement, he provides no shortage of intentional contradictions, playfully impossible boasts, and sarcastic dismissals of your accomplishments. The highest compliment I ever received may have been “I was just about to tell you you sucked, but then you went and didn’t suck.” Every time you pick up a gem, a ball of yarn (for your cat overlords), or a powerup, he will be ready with a comment, and thanks to the wide variety of remarks about said collectibles, as well the level’s traps and obstacles (and your deaths), the dialogue rarely repeats and never gets old. All of this is backed up by a sublime musical score that hooks you right from the start.

The gameplay itself is Super Mario-smooth and polished to perfection. You have full control of your direction during jumps and free falls, and running off a ledge will give you both an initial jump and your double jump, meaning there are tons of ways to get around the various spikes, lasers, water hazards (because, again, cat overlords) and enemies scattered throughout each scene. You can fight back with slide kicks, pushes (useful for shoving a baddie into a hazard) and even special unlockable weapons in Behemoth’s usual style of insane variety – exploding frogs, grenades, and Frisbees. 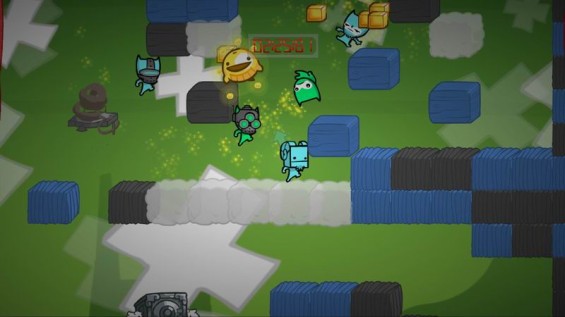 Each scene is composed of titular blocks (although the blocks never really do any battling), with each block serving a specific purpose as either a platform, an obstacle, or a method of transportation. Teleporter blocks, sticky blocks, and false blocks are all present within the short, obstacle-course themed scenes. In order to advance, one need only collect three gems, but collecting every gem, the yarn, and beating a clock challenge can result in a better letter grade at the end of each scene, earning you bonus gems to unlock more “prisoners” (read: new interchangeable heads to use for your character). The scenes’ short length means that replaying levels to find collectibles you missed is painless and fun, and if you’re a perfectionist you’ll no doubt be replaying every level until you have an A++ on each.

As mentioned previously, BBT has full co-op support for up to four players and a competitive arena mode with a surprisingly large number of game modes in it, but there’s so much more to this game than just the fantastic multiplayer support. In addition to the story mode, which is playable on both normal and insane difficulties, there is a time trial mode and, best of all, a fantastic level editor. The level editor allows you to create your own levels and upload them for others to enjoy, giving the game literally infinite replay value – think LittleBigPlanet with smoother and better platforming mechanics. 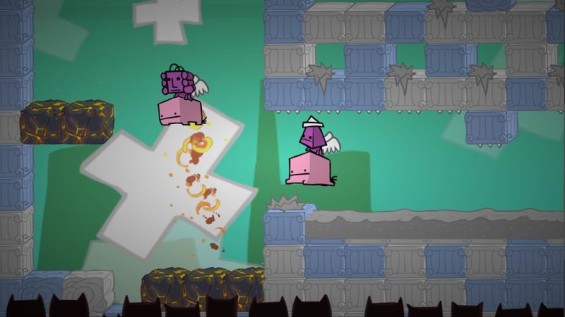 BattleBlock Theater proves that The Behemoth is more than just a fantastic developer. The studio understands fun in an intricate way, weaving art, sound, and style together to create an entertaining experience that players won’t be able to forget. To paraphrase one of the narrator’s quotes from what will no doubt be a list of 2013’s best video game quotes, I’ve already beaten this review a billion times, and also I’m a pathological liar. Or maybe I’m not. What’s going on?