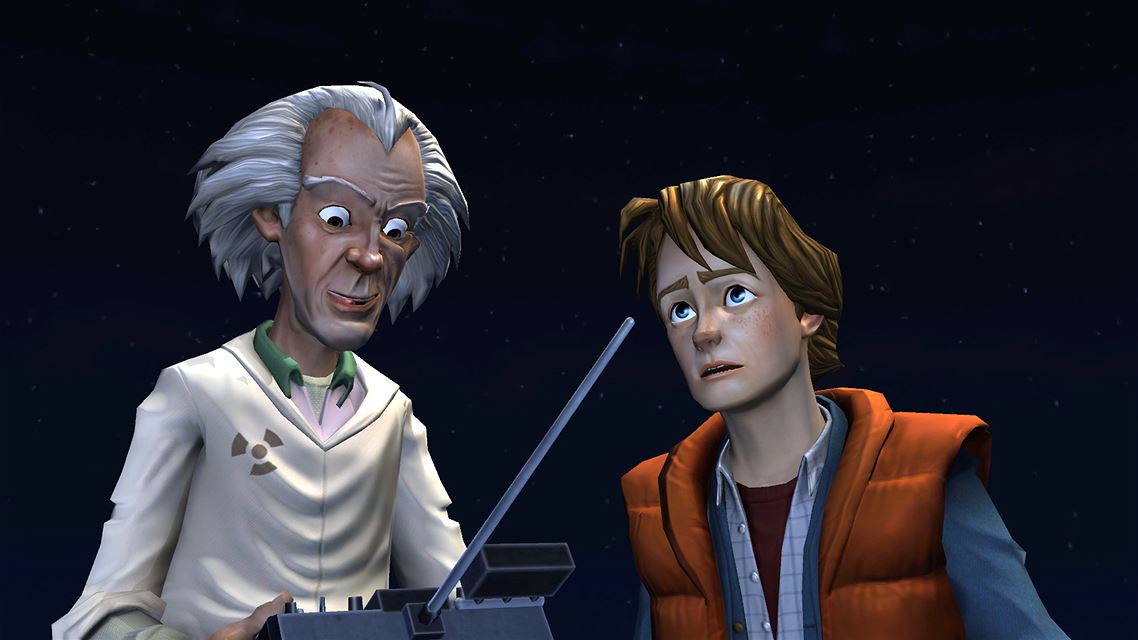 With October 21st, 2015 already in the past I must admit I’m a little disappointed that we don’t have hover boards and the Cubs still haven’t won the World Series, but luckily Telltale Games has premastered Back to the Future: The Game for release on this generation platforms. Many of us know that the transition from movie to videogame seldom works to benefit gamers and only fattens the pockets of the producers cashing in a franchise name, but Telltale has a way to work magic with the license they get a hold of from The Walking Dead to The Fables: A Wolf Among Us. With such an iconic movie people’s expectations will run high, can Telltale live up to their previous productions? Let’s find out… 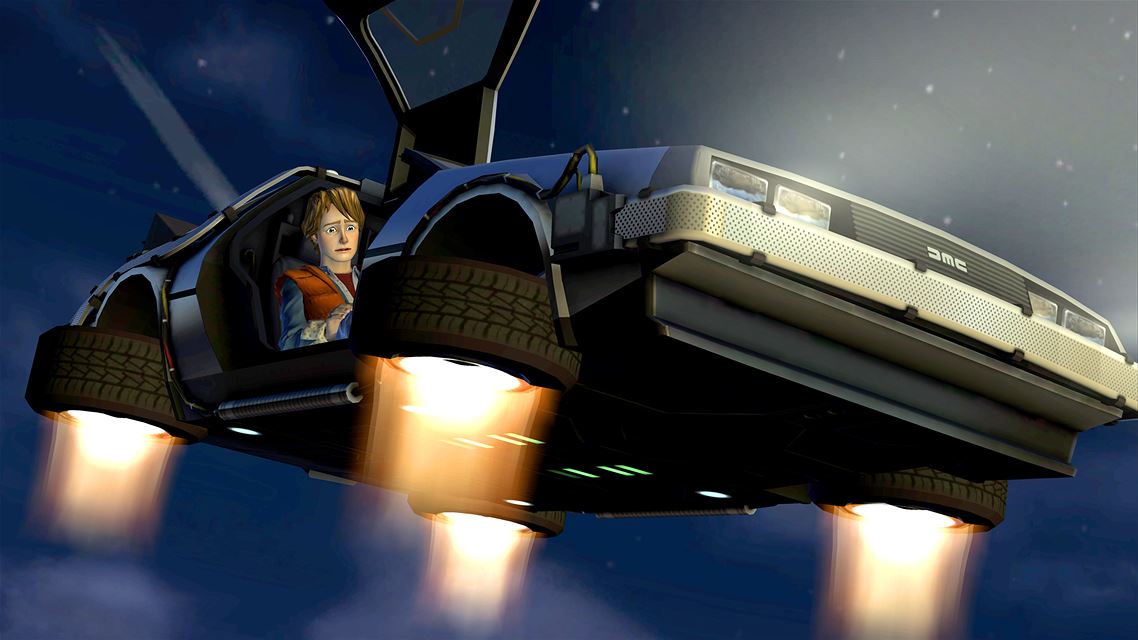 Story is everything when approaching any game that hopes to encompass the source material as well as hook the gamer to play through the entire game. Back to the Future: The Game jumps 6 months after the events of Back to the Future 3 where Marty is tasked with finding out what happened to Doc Brown when the DeLorean mysteriously appears driverless! Now it is up to Marty McFly to go back to travel back in time to find Doc and fix whatever mess he has gotten himself into.

If you’re familiar with the gameplay associated with pretty much all Telltale Games you’ll feel right at home, if you happen to be a newbie don’t fret you’ll get the gist quickly. Players encounter conversation trees where you have to choose a different question or response that leads you down a path to solve clues to find Doc. Through these conversations you’ll face a myriad of puzzles that range from basic mysteries to complex brain teasers that vary throughout each episode. At times you’ll feel like you’re stuck in the same loop of dialogue, but there are helpful “hints” located in the pause menu if you get stuck that usually assist in solving your current dilemma. Playing as Marty McFly you don’t have free roam of Hill Valley, but you are able to interact with various characters you run across as well as items scattered throughout the levels that may or may not contain signs pointing you in the right direction. 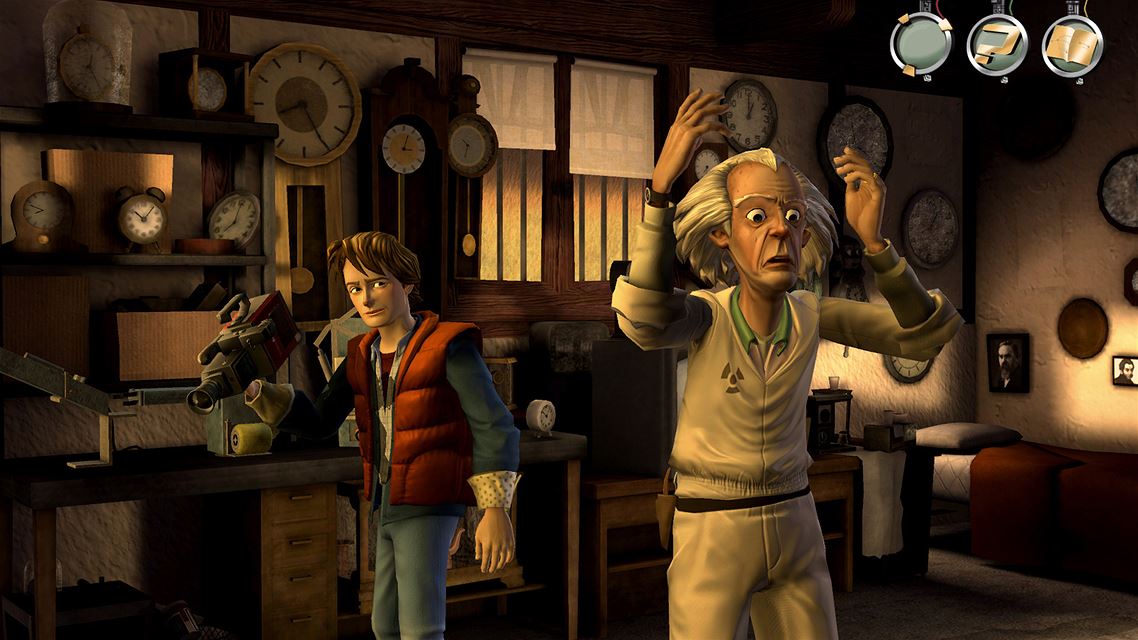 Back to the Future the Game is told through 5 different episodes that leave you with a cliffhanger that keeps you pushing on till the end. Starting out, Telltale lays a great foundation for a classic Back to the Future story, but in episodes 2-4 it gets progressively crazy and over the top. That isn’t to say the plot is terrible as the episodes build the tension to the final conclusion, but it just feels like it ends without giving a satisfying pay-off it really warrants. Visuals are great with the cartoon like aesthetic, but what really sets the game apart from other movie spinoffs is the top notch voice acting that features original movie cast members like Christopher Lloyd (Doc Brown), Tom Wilson (Biff Tannen), Claudia Wells (Jennifer Parker), and even Michael J Fox in special cameos as McFly’s of the past and future. While Michael J. Fox doesn’t actually voice Marty McFly his replacement sounds like an almost perfect match that in time you won’t even notice as his voice breaks and cracks just like the original. 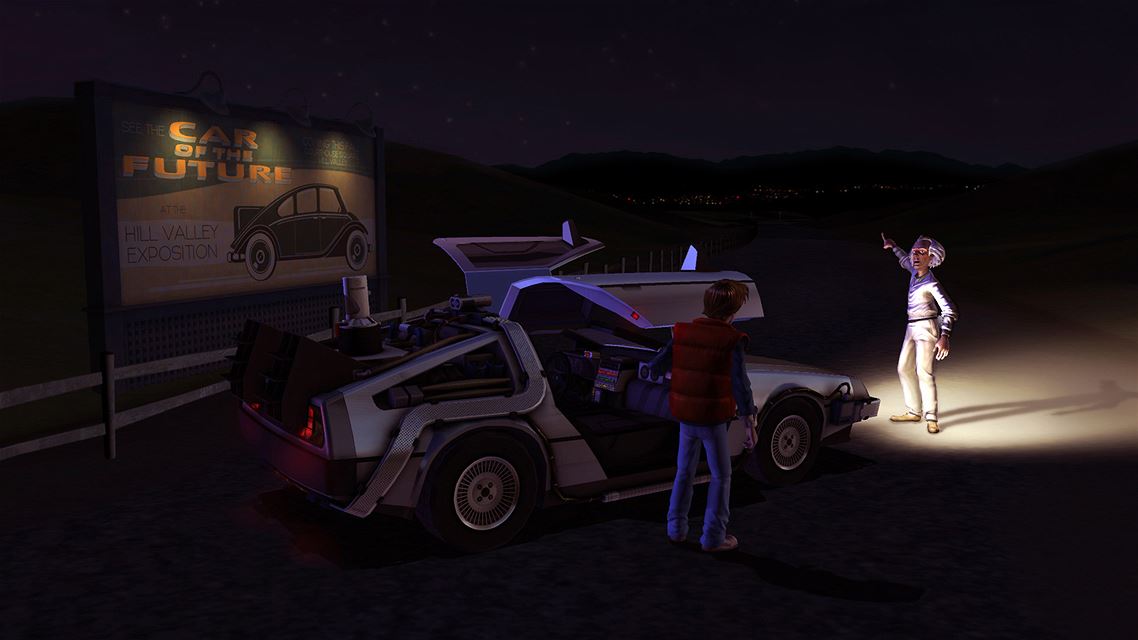 While the game was originally released just a handful of years ago many gamers never got the chance to play it, but with its re-release this is one part of the Back to the Future universe you won’t want to skip on. The minor flaws I encountered were more about my inability to figure out a puzzle than the game being obscure and those who love a good brain teaser will thoroughly enjoy some of the challenges the game presents. Telltale has a special way of spinning a game around their stories that makes it flow unlike anything else on the market and when that is added in with the superb visuals and sound, fans of Back to the Future and even those unfamiliar with the films won’t be disappointed in adding this to their library.